DENVER — With the end of January upon us, we are two-thirds of the way through the meteorological winter (Dec. 1 to March 1).

It has been an interesting season so far, with significant fluctuations in temperature and an up-and-down ride from a snow standpoint.

There were lengthy warm and dry periods in October and November. Then came the arrival of the Pineapple Express, which finally changed the weather pattern and started bringing snow and cold to the mix.

There were even a few instances in which there was near-record cold along the Front Range. 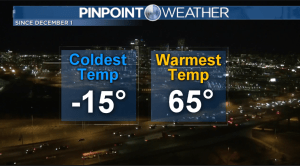 As January comes to an end and the amount of daylight continues to increase, the average high and low temperatures will begin to steadily rise.

Average highs for February range in the middle-40s with average lows in the upper teens. By March, those numbers push to the middle-50s and the middle-20s.

Once April rolls around, it will begin to feel like spring as average highs reach the lower 60s with average lows in the lower 30s.

However, even with the arrival of warmer, more springlike temperatures, those months tend to be some of the snowiest of the year.

Technically, Denver isn’t even halfway done with snow totals for the season.

While mountain communities have been getting buried since the beginning of December and have climbed out of their snow deficit, the getting hasn’t been as good around the metro from a snow standpoint.

Snow totals were above average in December and January, but it hasn’t been enough to get out of the hole during the previous months. The snow total for this season at Denver International Airport is 17.7 inches. 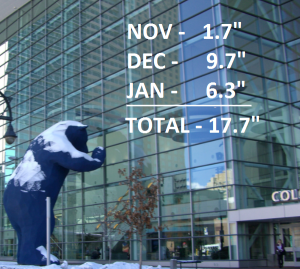 The average is 27.4 inches, almost a foot higher than what has fallen.

Every month, the Climate Prediction Center, a branch of the National Weather Service, makes forecasts for the month ahead, along with a three-month forecast.

These forecasts give a percentage chances of average, above average or below average precipitation during the forecast time frame.

The CPC’s latest forecasts show Colorado has the best shot to stay around average from a snow standpoint over the next few months.

If that turns out to be the case, the season will end with snow totals slightly below average, somewhere in the 40-inch to 45-inch range. Either way, there’s still plenty of snow to go.

As is typical, and what feels to be inevitable during those late winter and early spring months, a big dump — or several big dumps — of snow will come. So keep the shovels nearby at least for the next few months.

Colder temperatures on the way along with some snow in Denver

DENVER (KDVR) -- A series of storm systems will be heading to Colorado starting this weekend and into early next week. The mountains will benefit with on-and-off snow just about every day through Tuesday. Snow totals will vary daily, but generally looking at between 2 to 3 inches each day.

In Denver, we are expecting more clouds across the area and cooler temperatures in the lower 40s over the weekend. That will be followed by even colder 30s by early next week.

DENVER (KDVR) -- We are forecasting a mountain wave cloud mixed with sunshine today across Denver and the Front Range.  Highs in the 40s.  Less wind than Wednesday.

The mountains stay cloudy with a 30 percent chance of snow showers.  Highs will be in the 20s.

DENVER (KDVR) -- A slow-moving storm spinning off Southern California will start to head our way on Thursday. The forecast track keeps the best chance for snow over the southern Colorado mountains. The central and northern mountains will see light snow with little accumulation.

That same storm will eventually lift some light snow across Denver and the Front Range from late Saturday into Sunday. Right now, accumulation looks to be light with around an inch possible by Sunday afternoon.