DENVER (KDVR) — Finally, some April action! There are two components to this system: severe storms and heavy snow. The powerful system also marks a general turn for a more consistently warm spring pattern across Colorado, which is welcome news for gardeners and agriculture. 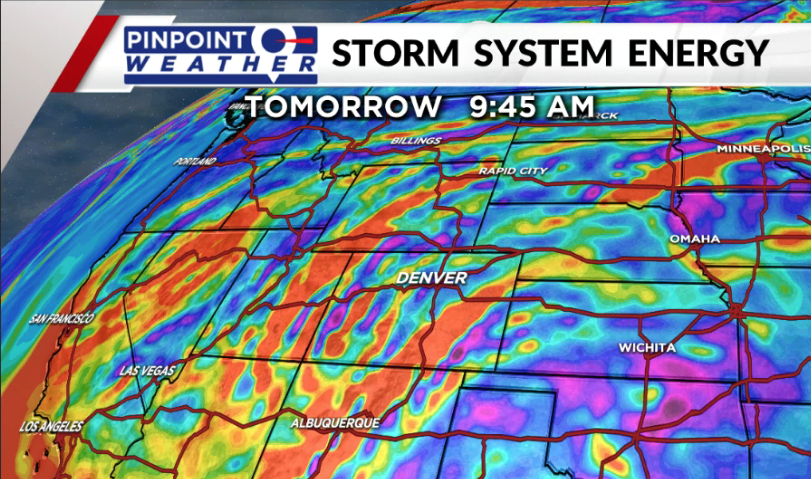 While it’s officially been spring for over a month, a vigorous winter storm system is barreling our way and is set to bring significant snows to the High Country on Tuesday and seriously beneficial rains to the drought-stricken plains.

The snow could total well over a foot along the Continental Divide and rainfall over 2″ east of I-25. Thunderstorms are likely in the plains and a few could reach severe limits with damaging wind gusts, hail and even (for the first time this season) a land spout or a weak tornado. (I see this slight tornado chance highest mainly along and just south of I-70 from Limon to Burlington Tuesday afternoon.)

Preceding this event on Monday afternoon, winds will gust past 40mph with highs near 80 degrees, creating a situation with very low relative humidities below 10%. The resultant extreme fire danger has prompted the National Weather Service to issue a Red Flag Warning for severe burn conditions, from the Sangre de Cristo range of southern Colorado into the eastern plains until sunset Monday. 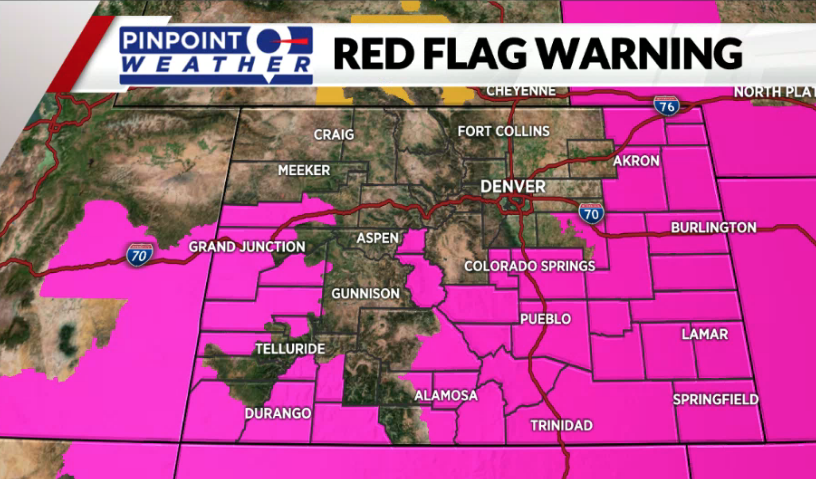 Here’s how it goes down

The strong storm system pushes into the Front Range late Monday night, spreading clouds across the region and with the breeze remaining busy, overnight lows will only dip into the mid-40s, allowing a fast rebound Tuesday with the rain, to around 60 degrees. 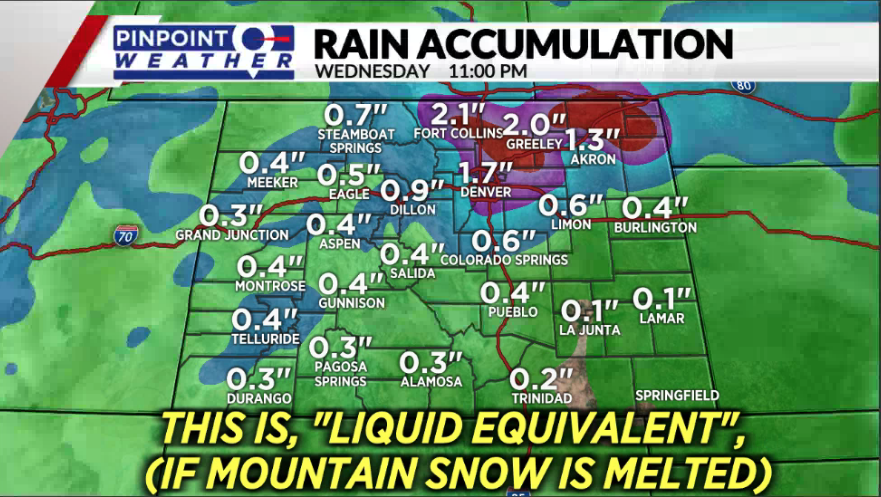 On the winter side, snows begin Tuesday morning above 8,000 feet and last all day, with highest totals focused along the Divide above 10,000 feet where 12″-18″ of high-water content snow (wet snow) will fall. This could create dangerous avalanche conditions in prone areas of the backcountry. (Check with the CO Avalanche Info Center before venturing out Wednesday after the storm.) 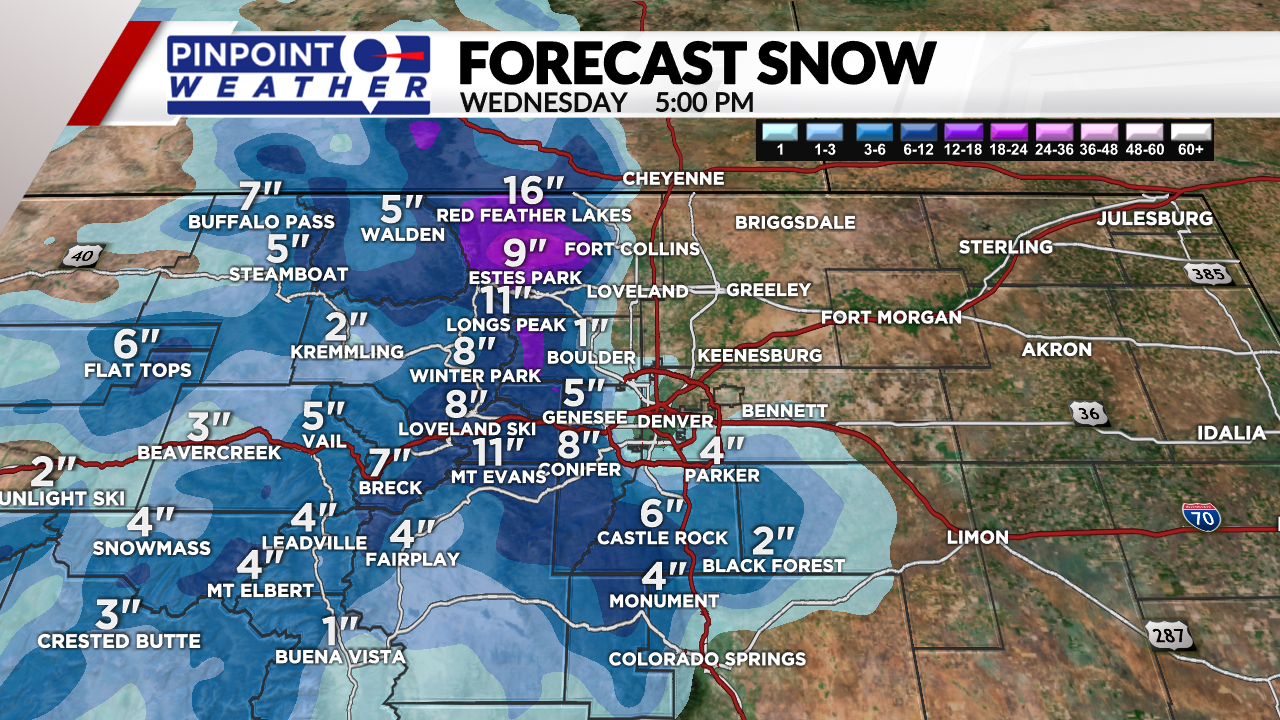 By the time the storm pulls away, snow levels will drop to around 6,500 feet allowing any lingering rain showers to mix with and briefly change to snow in the Foothills. Little accumulation is expected beyond a coating to a few inches on elevated surfaces like decks and patios in those areas.

On the spring side, thunder will sound by Tuesday afternoon in the plains and near the Palmer Divide as widespread rain and isolated storms develop with highs near 60 degrees in Denver. One or two severe storms are possible with winds gusts past 60mph and small hail. Some computer models suggest there is a risk for a few weak tornadoes in the far eastern plains and southeast Colorado as wind sheer increases along the edge of the warm sector of the system, where highs will reach the mid-70s in southeast Colorado Tuesday.

Once the system departs the region, temperatures will rebound into the low 80s for a gorgeous (and much greener landscape) of a spring weekend!

This is a true spring storm system! For most of us it will be no worse than a beneficial rain but for some in the High Country, it’ll be a heavy late-season snow. In the plains it represents the first significant severe storm chance of the season. While the Tuesday evening and Wednesday morning commutes in the Urban Corridor will be wet and rainy, for the most part it’s all just great news for lawns and gardens.

DENVER (KDVR) -- Regis University announced it will provide one of two new locations for a Safe Outdoor Space and emergency housing facility.

The 19,000-square-foot temporary facility will be located in the parking lot at 50th Avenue and Federal.

DENVER (KDVR) -- President Biden is still trying to garner support for his nearly $3 trillion infrastructure plan. One Colorado senator was back home Wednesday touring a current site, in hopes of seeing more like them in the future.

The AIP or American Infrastructure Plan, formally titled the American Jobs Plan, is slated to bring airports about $25 billion.