DENVER (KDVR) — Mark your calendar! We’ve got a big astronomical event ahead in less than a week and like so many moons making the news in recent history, this one may take the cake for most unusual, or long-winded name. That’s because the lunar eclipse is happening alongside two other distinguishable events in how the moon will look from earth. It’s called the, “Total Lunar Eclipse of the Super Full Flower Moon.”

Why such a long name for a full moon?

As the moon will be in the perigee of its orbit (closer to the earth than its average), it’ll appear a touch larger and a bit brighter, amplifying any visual effects from the lunar eclipse, as the Earth’s shadow passes across the moon. This closer orbit earns it the nickname, “Super Moon.”

This full moon is known popularly as the Flower Moon because it comes at a time when spring flowers are often in full bloom in the northern hemisphere. Because different parts of the world have different seasons and cultures, its name changes. It’s also known as the Corn Planting Moon, indicating that it’s the time of year to start those crops. Others call it the Milk Moon and Hare Moon. You get the idea!

This is a show for the American West and parts of the Deep South. You can see it in totality (when the moon appears reddest, under the darkest shadow of Earth) from roughly New Orleans to Denver, points west shortly before sunrise on Wednesday, May 26. Chicago won’t get much of a show, nor New York — though if you’re in the Windy City and look up around 5:20am, the once full moon will look like it’s in the second quarter of its monthly phase, before it sets. In the Big Apple, you won’t see anything noticeable. In the nation’s 2nd and 3rd largest cities, it’ll be a curiosity but largely yawn-worthy. However, in the west and over the Pacific Ocean, it will be a showstopper!

What you’ll see when the lunar eclipse happens

If sky conditions allow and clouds stay away, you’ll see a blood-red full moon and a spectacular show. As this will be happening around dawn in the mountain and Pacific time zones, the farther west you go, the darker the skies and deeper red the moon will appear. If you find yourself in Hawaii, the eclipse will be most dramatic, peaking shortly after 1am local time with a bright, red blood moon! 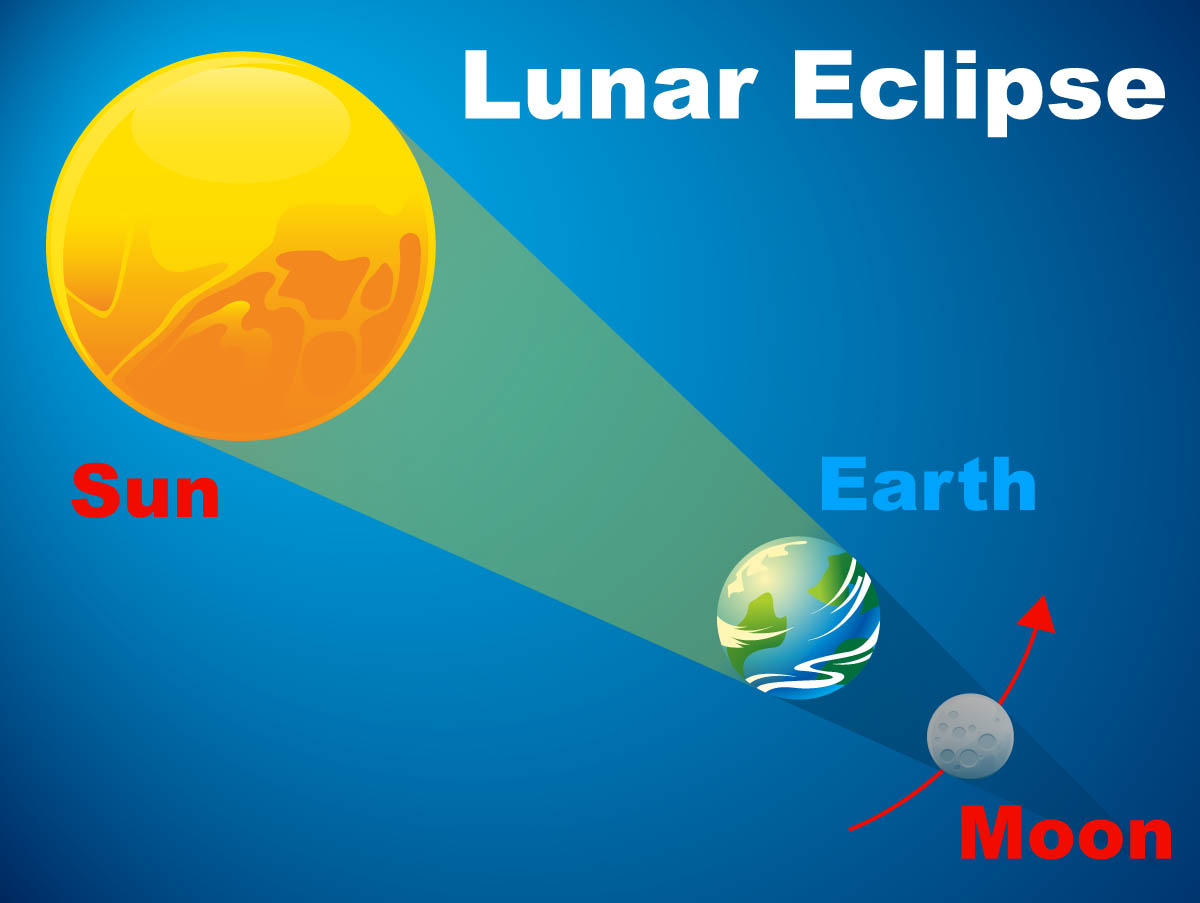 Why will the moon look red?

The moon turns a reddish hue when the darkest of our planet’s shadow crosses it because the sunshine striking Earth on the daylight side is refracted around to the edge of the atmosphere on the night side and projected into a cone onto the moon. It’s called, “blue light scattering.” Literally, the red sky color from our sunsets and sun rises happening on Earth in real time, are projected onto the moon.

What is the exact Timing

From the perspective of Denver, in mountain time, the first visible part of the lunar eclipse begins at 3:44 a.m. It’ll look like the once-full moon is rapidly waning into a crescent moon. Then starting at 5:11 a.m., the moon enters totality, where it becomes a reddish color as it begins to set. (That’s when the red sunrises and sunsets are projected onto the lunar surface.) The max eclipse happens at 5:18 a.m., and at 5:43 a.m. the moon sets. To see it, you must have a nice, wide view of the western horizon. (If you’re Hawaii however, it’ll appear right overhead.) 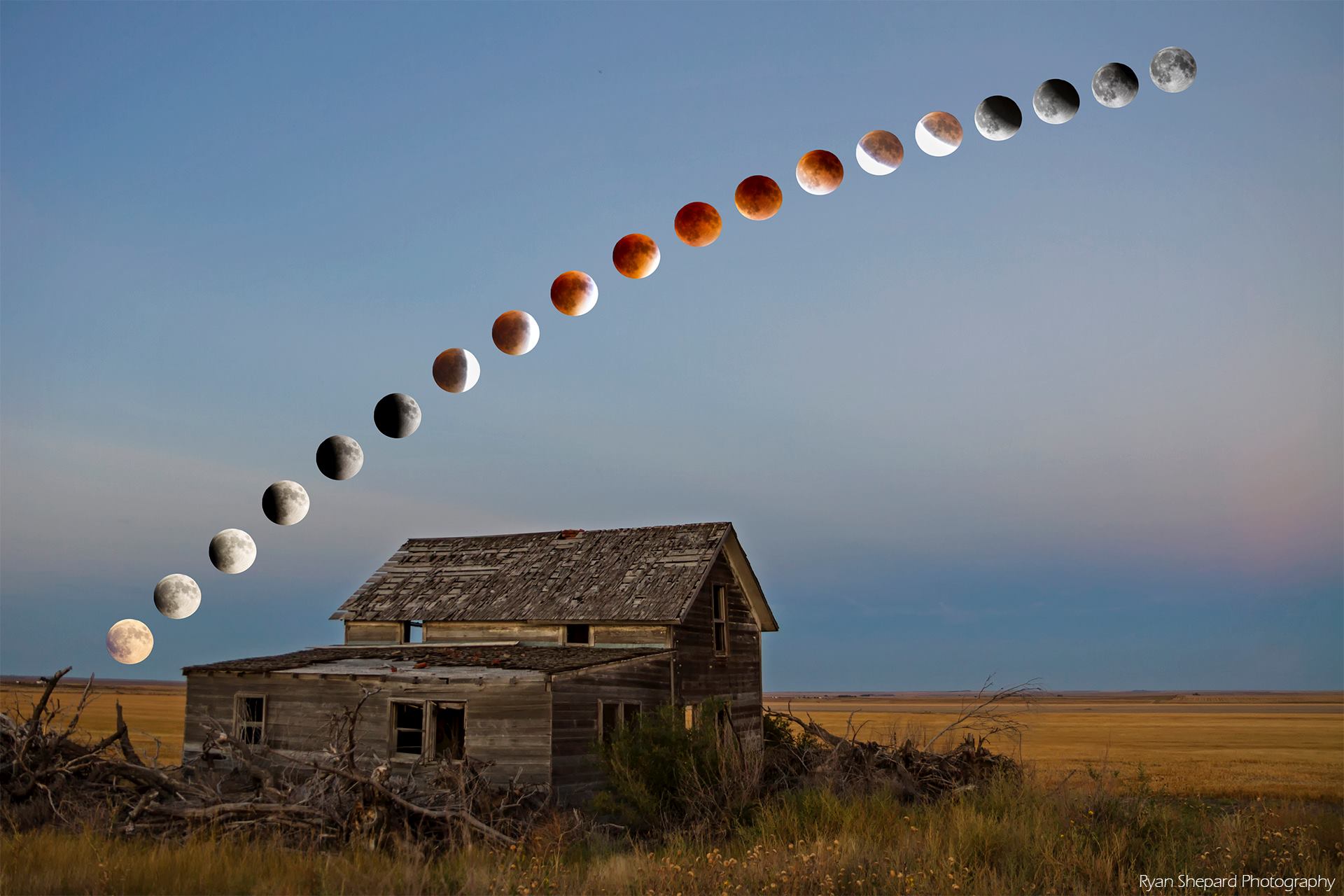 While scientifically, the lunar eclipse is nothing more than the shadow of the Earth passing over the lunar surface, in history and folklore, this is a notable time. One story includes the exploits (literally) of Columbus, when he exploited the indigenous peoples of the island we call today, Jamaica, back in 1504. His men were starving and his ships not seaworthy after a long journey from Europe. His last hope to get food for his men was to strike fear into the native population in hopes to compel them to bring them food. He came up with a plan, after referencing an almanac he had which told him a lunar eclipse was fast-approaching. Calling a meeting with the Arawak leader of the island, Columbus warned that if they weren’t fed, God would make the moon red and angry as a warning. Primed with that suggestion, when the moon inevitably turned red during that total lunar eclipse, the Arawak leader conceded in panic.

The next lunar eclipse doesn’t happen for a year

The next total lunar eclipse happens on the night of May 15, 2022 and lasts into the wee hours of the morning of May 16. Unlike this year’s peaking on the West Coast, next years will peak on the East Coast of the US.

From the perspective of Colorado, the 2022 lunar eclipse will last almost five-times longer than this month’s! That means it’ll be blood red for nearly an hour and a half! If you miss it this year, there’s always next year.

DENVER (KDVR) — Johnny Hurley, the good “Samaritan” identified in Arvada’s deadly shooting on Monday, would help anyone in need, according to his best friends and former co-workers, who are now grieving the 40-year-old’s death.

“Johnny was the kind of guy that would think of everyone but himself first, always. It wouldn’t matter what the situation was,” said Cole Crocker, who used to work with Hurley at All Love Catering before the business shut down during the pandemic.

AURORA, Colo. (KDVR) — Aurora Mayor Mike Coffman invited the police chief to come before the city council to address gun violence after a violent shooting at an Aurora strip mall over the weekend.

Newly obtained audio captured the moments gunfire was heard around 4:15 a.m. Sunday at the parking lot in the 12500 block of East Mississippi Avenue. The shots can be heard in rapid succession for close to a minute.

ARVADA, Colo. (KDVR) — The Jefferson County Coroner has officially identified the suspect accused of gunning down an Arvada police officer on Monday as 59 year-old Ronald Troyke.

Troyke's apartment was raided on Monday, shortly after the shootings that claimed the lives of police officer Gordon Beesley and a good Samaritan named John Hurley.

From Biden to Congress, Big Tech is under mounting pressure

DIA expected to be very busy this summer, TSA hiring to keep up with demand

Elderly penguin gets custom shoes to help with arthritis at St. Louis Zoo

Hot and hazy, followed by more rain and cooler outlook