DENVER — Since 1950, El Niño conditions have been documented 24 times.  Most of those patterns were considered “weak,”  which means the waters of the Pacific Ocean were warm but not too far above average.

Only three times in the past 66 years have “strong” El Niño conditions been observed.  One of those three instances is the El Niño pattern we are currently witnessing.

In fact, it has become one of the strongest on record and has been deemed by some as the “Godzilla El Niño.”

How has this latest round of super warm sea surface temperatures in the Pacific affected weather in Colorado?  Let’s take a look.

During this time, parts of Colorado slipped into a drought.  This was especially true across southern Colorado. By July 2014, most communities in southeast Colorado were in severe or extreme drought.

Right around that time, Pacific waters started warming up, as the beginning stages of the latest El Niño pattern were taking shape.

Over the next 18 months, the warming trend continued, and just as we typically see during an El Niño pattern, the jet stream shifted south. As a result, this pushed more moisture over southern Colorado that eventually led to hearty amounts of rain and snow across southern parts of the state.

Today, most of Colorado is considered drought-free.

The beginning of the 2015-16 snow season has been generous to the mountainous areas of Colorado.  Ski resorts and snow lovers around the state certainly have been happy with this year’s abundance of snow, though some parts of the state are smiling bigger than others.

Those smiles are coming from — you guessed it — southwest Colorado.  Just as is typically seen through an El Niño winter, the mountains in the southwest corner of the state have been blessed with the most snowfall so far this season. 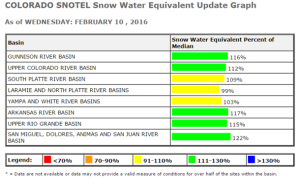 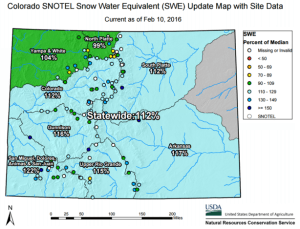 We have decided to add a third part to the El Niño series.  The topic will revolve around El Niño forecasts and what that might mean to Colorado weather as we go through the rest of 2016.

DENVER (KDVR) -- We have issued a Pinpoint Weather Alert Day for the possibility of severe storms Tuesday. There is a 30 percent chance of afternoon t-storms across the Eastern and Northeastern Plains on Tuesday.  Some of the t-storms could turn severe with large hail (quarter sized or larger), strong wind (58 miles per hour or stronger), and heavy rain in Limon, Burlington, Deer Trail, Fort Morgan, and Sterling.

Showers and thunderstorms possible each afternoon this week

DENVER (KDVR) -- There will be scattered thunderstorms in Denver this evening moving off the mountains and foothills and across the area. A few may contain lightning, gusty wind and hail.

We will have additional storms each afternoon through Thursday. The storms will be scattered, but will still bring the threat for lightning, wind and hail. Some may also produce brief heavy rain.

DENVER (KDVR) -- There will be a 40 percent chance of afternoon t-storms today in Denver, Boulder, Loveland and Fort Collins.  Lightning and heavy rain are possible.  Highs around 87 degrees.

The normal high right now in Denver is 89 degrees.

The Smart Cookies on what to Buy in August

At least 50 killed, hundreds hurt in massive blast in Beirut

Filing for citizenship, other benefits becomes more expensive in October

Search continues for 18-year-old who drowned at Chatfield Reservoir