DENVER — A Pinpoint Weather Alert Day is in effect for Saturday as there will be travel issues for those on the Eastern Plains and between the city and Colorado Springs.

A system will move over Southern Colorado through Saturday dropping lots of snow on the San Juan Mountains and rain, freezing rain, and snow on the eastern Plains near Kansas and Nebraska.

For Denver, snow showers possible later Friday through Saturday with the heaviest to fall Saturday morning. 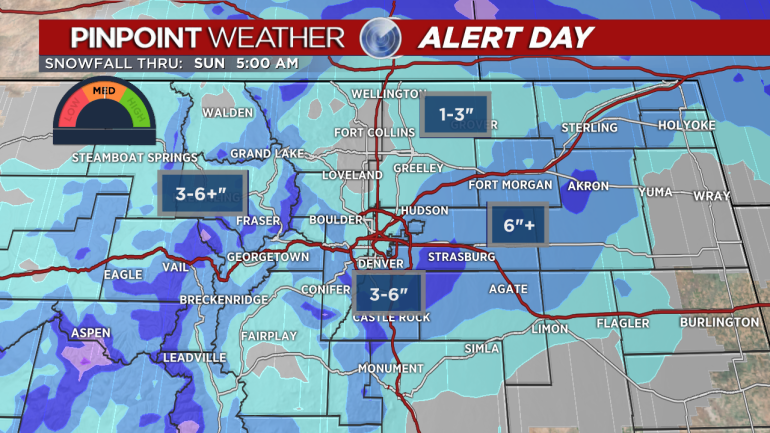 Travel routes that will have the highest impact will be I-76 between the city and Nebraska and Highways 34 and 36 across the plains. Plus, I-25 from Castle Rock to Monument.

DIA will have some impact as well, likely deicing for all planes, and if the system changes speed or path there will be accumulating snow to worry about at the airport.

Timing is walked through here, and a discussion of confidence in this storm's forecast and impact. The highest impact on Denver remains Saturday, mostly in the morning based on the current data. pic.twitter.com/LSS52yz3Hb

There is likely to be calmer weather through New Year’s Eve with highs in the 30s and 40s. The next chance of snow showers will be New Year’s Day, but the chance appears low at this time.

Check Colorado interactive radar and zoom in to where you are. Plus, check the radar anytime with the Pinpoint Weather App for iPhone and Android.

Pinpoint Weather has been independently certified as Colorado’s Most Accurate Forecast by WeatheRate.

We’re tracking Denver weather today on FOX31 and Channel 2 News – and when conditions are bad we send out the Weather Beast.

GLENWOOD/HOT SULFUR SPRINGS, Colo. (KDVR) -- Water usage has been restricted for residents in Glenwood Springs and Hot Sulphur Springs through Monday due to issues with the supply from the Colorado River.

The City of Glenwood Springs issued a stop to outdoor water usage and a cease of sprinkler system usage until 8 a.m. Monday.

SAN DIEGO (AP) — Germán Márquez outdueled Yu Darvish and hit a 418-foot home run off his fellow All-Star to lead the Colorado Rockies to a 5-3 victory against the San Diego Padres.

Brendan Rodgers and Elias Díaz also homered off Darvish for the Rockies, who beat the Padres for the second straight night and have won four of their last five games against San Diego.

“I think about her every day, but it’s a part of life. She and my dad prepared me for times like this. I’ve been relying on my faith a lot and relying on my teammates,” the Broncos third year tight end said. “They’ve been helping me out a lot. Justin Simmons is another one that I talk to quite a bit. They’ve been helping me out a lot and just being there for me. Von asks me every day how I’m doing and asks me when my dad is coming out. We have some great guys on this team.”