DENVER — After being stuck in a dry pattern for the past several weeks, the Front Range finally has a chance to see multiple storm systems this week.

Weather changes will move in by early Monday morning. The Front Range and eastern Plains will wake up to fog and low clouds.

A dense fog advisory is in place for the far eastern Plains from 8 p.m. Sunday until 10 .a.m Monday. Some areas will see drizzle develop within the fog and low clouds.

Fog and low clouds will burn off by midday allowing some sunshine to peak through.

Afternoon temperatures in Denver will be in the low 50s or cooler if cloud cover hangs around longer.

Rain showers will develop on the Front Range during the afternoon quickly changing over to snow by Monday evening.

Snow showers will be heavy at times and will clear out early Tuesday morning before the morning commute.

In Denver, most of the accumulating snow will fall between 8 p.m. Monday and 1 a.m. Tuesday.

Winds will be gusty at times during this storm causing reduced visibility. Travel will be challenging along the Front Range and in the eastern mountains late Monday night and early Tuesday morning.

The mountains will have scattered snow showers Monday afternoon through midday Tuesday. The southern mountains are under a winter storm watch from 6 p.m. Monday until noon Tuesday.

Snow totals include 1-3 inches in the Denver metro area, 3-7 inches in the foothills and along the Palmer Divide and 3-10 inches for the eastern mountains.

The Western Slope and eastern Plains will only see small totals, mostly likely less than an inch. 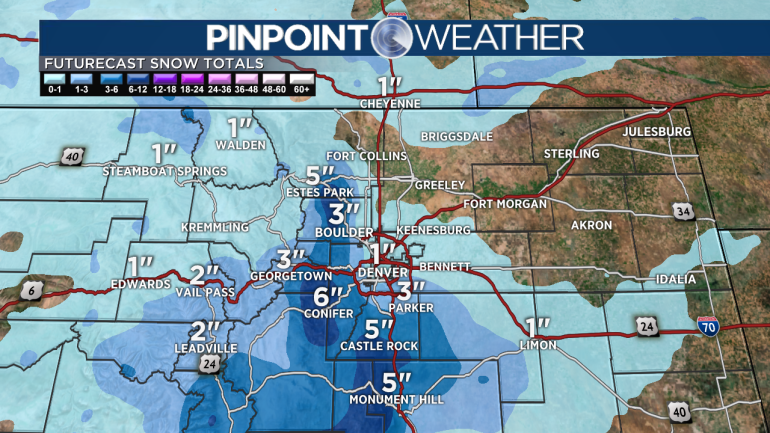 Highs on Tuesday will be in the mid-40s with dry conditions in the afternoon and evening for Denver. Wednesday will stay dry until late when another chance for snow moves in.

Rain and snow showers will stay for Thursday with high temperatures dropping back to the 40s.

Friday appears to be the driest day this week with highs in the 60s. Another storm system arrives late Saturday into Sunday.

Check interactive radar and zoom in to where you are. Plus, check the radar anytime with the Pinpoint Weather App for iPhone and Android.

Pinpoint Weather has been independently certified as Colorado’s Most Accurate Forecast by WeatheRate.

We’re tracking weather today on FOX31 Denver and Channel 2 News — and when conditions are bad we send out the Weather Beast.

DENVER (KDVR) -- A fast-moving storm system will bring bands of snow this evening along the Front Range and in metro Denver. Some of the bands could be heavy at times generating an inch or more in about an hour. The roads will turn slushy and slick especially after sunset.

Accumulation of the heavy wet snow will fall this evening and slowly start to end around midnight. Light additional snow could linger into very early on Tuesday especially south of the city.

Here is everything you need to know:

DENVER (KDVR) -- We are forecasting a strong April cold front today.  It hits first in Northern Colorado around noon with snow developing.  The front hits Denver around 3 p.m.  Temperatures fall quickly from the 40s into the 30s and then 20s.

Three inches of snow accumulation is expected in Denver, Loveland, and Fort Collins.  Up to 7 inches in Boulder.  4-8 inches in the Foothills.  3-6 inches across the Palmer Divide.