DENVER — Over the last few weeks, the term Pineapple Express was used a few times in reference to the pounding of snow the mountains from California to Colorado have received.

The term is used to describe an atmospheric pattern that delivers a river of Pacific moisture to the western United States.

The term was coined because of the proximity of the moisture’s origin to Hawaii. Essentially, the jet stream flow picks up this moisture near the island state and transports it directly to the Pacific Coast where it feeds storms the necessary fuel to deliver the type of rain and snow totals we’ve witnessed since the beginning of December.

The Colorado snowpack summary from the Natural Resources Conservation Service gives a good gauge of when the Pineapple Express was most prolific across the state. 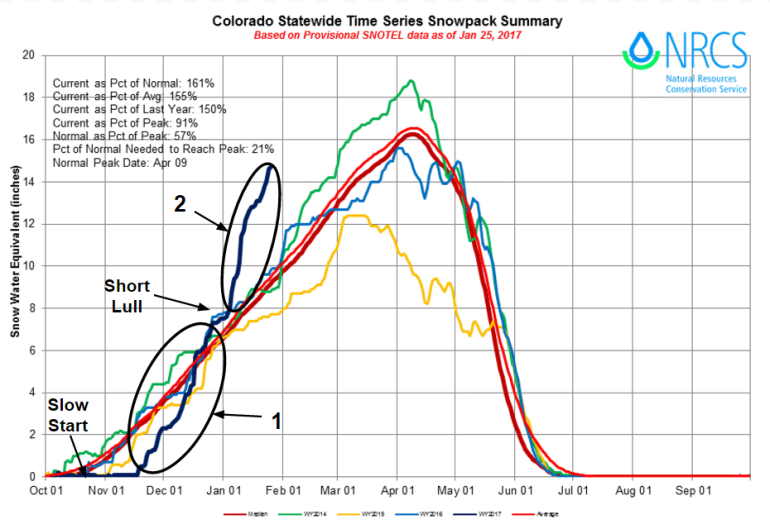 Most of November was fairly dry, causing some to worry about how the rest of the season would pan out.  Luckily for snow lovers and ski resorts, it wouldn’t be much longer before the Pineapple Express would come to the rescue.

The first blast of snow arrived in early December and lasted for nearly two weeks before finally settling down around Christmas.

After a short lull period that lasted through the first few days of the New Year, the snow began to dump again.

The second stretch was the string of days in which so much snow fell, some ski resorts had to close.

Snowfall totals have been quite healthy this year across the entire state. So far, snowfall statewide this season is 161 percent compared to average. 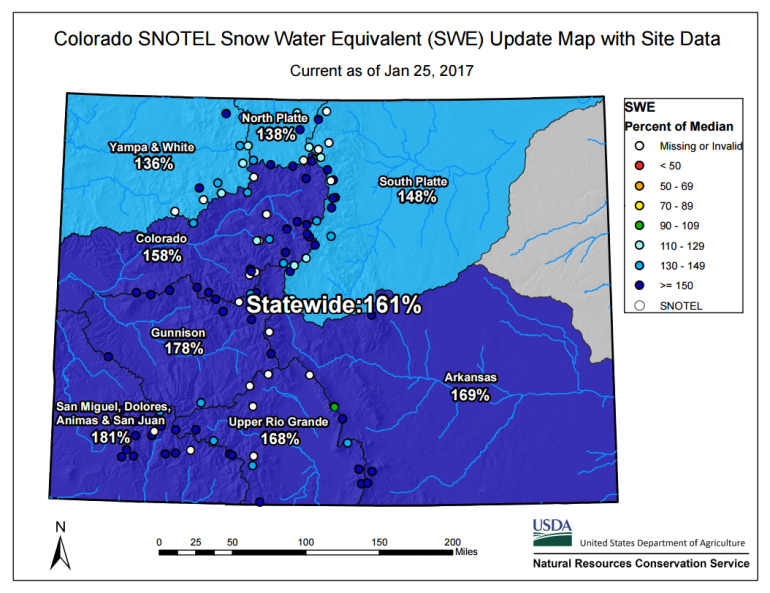 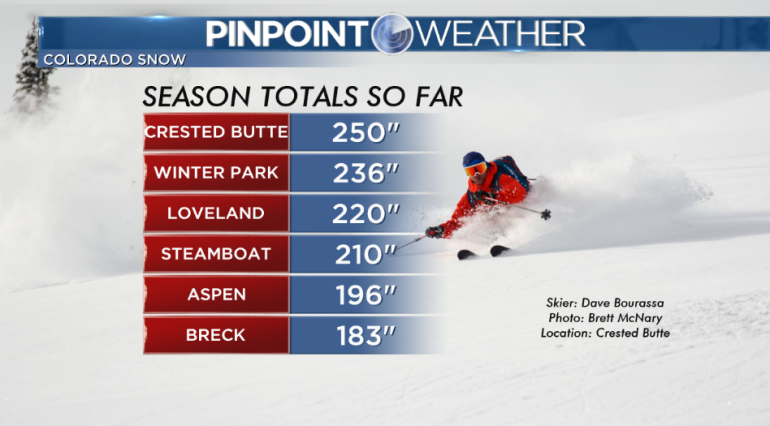 Looking ahead, weather models are starting to hint at a break in the action.

The Pineapple Express river of moisture has been cut off and a large area of high pressure is expected to settle over the western half of the country.

This will settle the skies and bring an end to the healthy string of impressive snow totals.

However, with that being said, as bluebird conditions return to the high country, we are looking ahead at a wonderful set of days and great travel conditions to head up to the resorts and enjoy some of that lovely snow.

Colder temperatures on the way along with some snow in Denver

DENVER (KDVR) -- A series of storm systems will be heading to Colorado starting this weekend and into early next week. The mountains will benefit with on-and-off snow just about every day through Tuesday. Snow totals will vary daily, but generally looking at between 2 to 3 inches each day.

In Denver, we are expecting more clouds across the area and cooler temperatures in the lower 40s over the weekend. That will be followed by even colder 30s by early next week.

DENVER (KDVR) -- We are forecasting a mountain wave cloud mixed with sunshine today across Denver and the Front Range.  Highs in the 40s.  Less wind than Wednesday.

The mountains stay cloudy with a 30 percent chance of snow showers.  Highs will be in the 20s.

DENVER (KDVR) -- A slow-moving storm spinning off Southern California will start to head our way on Thursday. The forecast track keeps the best chance for snow over the southern Colorado mountains. The central and northern mountains will see light snow with little accumulation.

That same storm will eventually lift some light snow across Denver and the Front Range from late Saturday into Sunday. Right now, accumulation looks to be light with around an inch possible by Sunday afternoon.