DENVER (KDVR) — Any farmer in the Colorado eastern plains, groundskeeper for our area golf courses and even homeowners can attest that these dry times across the Front Range have resulted in some major problems. They include but aren’t limited to crop failure and the associated insurance claims, stressed turf and grass areas, and of course, all the high water bills. The good news is that there’s hope on the horizon!

You may have heard the old phrase, “often, droughts are ended by floods.” While we haven’t had to endure a massive amount of flooding, Colorado is no stranger to high levels of water. The deadly Big Thompson flood in 1976 ended up causing $35 million in damage to more than 400 homes and several other pieces of infrastructure. A few years ago, the 2013 Colorado Front Range Flood qualified as a ‘1,000 year event’. More recently, we’ve had a few instances of flash flooding in Larimer County, especially near the burn scars in the mountainous terrain where the water ran far too fast for creeks and rivers to handle it. But for most of us, relief came in the form of regular rain and snow.

Denver’s landscape today is already starting to look better with lush, green grass and flowering trees. It’s also free from drought! The drought conditions in the metro have dissipated to undetectable levels across the Front Range. While this may not stick permanently, at least we can say for now, the drought has ended. 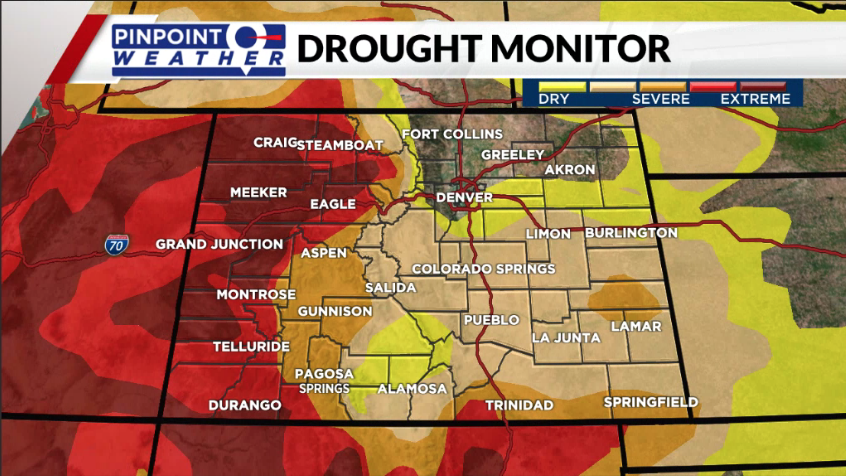 Making such declarations unfortunately delves into the world of subjectivity, which means we can’t really say the drought is officially over. Like any force of nature, short-term and medium-term trends often don’t guarantee long-term results. In this case, a few wet months did alleviate the worst of the drought conditions and returned soils back to their normal moisture content, but that doesn’t mean it’ll remain this way through out the growing season.

The question came up recently with a Jefferson County Park Ranger and was answered by the National Weather Service office in Boulder.

A few dry weeks could send us back to dryer soil levels and then we’d be leaning toward a drought situation once again. Considering that most of the western US is enduring a multi-decade drought, this is certainly in the realm of possibility, if not likely. While most of us can live for today and enjoy an abundance of water to keep our yards green and watering bills low, farmers are always keeping a weary eye out for what may lay on the horizon, and they end up planning their seasonal irrigation practices accordingly.

ARVADA, Colo. (KDVR) -- The Shrine of St. Anne Catholic Parish/Community will host a prayer vigil on Thursday night to pray for peace and for fallen officer Gordon Beesley, who was killed during a shooting in Olde Town on Monday.

Miami Dade Fire Rescue was conducting search and rescue operations, and said in a tweet that more than 80 units were “on scene with assistance from municipal fire departments.”

DENVER (KDVR) -- We have several cold fronts on the way to Colorado, which will provide relief from the heat and return rain across the area, including to the drought-stricken western half of the state.

Showers and thunderstorms will develop in the mountains by lunchtime and spread onto the plains and across metro Denver in the afternoon.

Lawyer says death of McAfee surprised the US mogul’s family

‘I did see the gunman go down’: Eyewitness describes heroic efforts during Arvada shooting

Britney Spears asks judge to free her from conservatorship: ‘I deserve to have a life’