DENVER (KDVR) — Tuesday marks the first “slight risk for severe weather” outlook of the season for Colorado, by the Storms Prediction Center (NOAA). Storm season here spans from spring until fall, but our severe weather risk typically peaks in late-spring and early summer.

The biggest hailstorm in history happened on May 8, 2017, causing an estimated $2 billion in damage to cars and roofs.  This storm resulted in the closure of the Colorado Mills Mall in Lakewood for months! Today’s system will not even be close to as bad, but we are within a couple of weeks of the anniversary of that historic hailstorm, so any time there’s a significant severe storm threat it absolutely bears watching.

Fortunately, today temperatures will be 20 degrees cooler than on that fateful May day, when they reached the mid-70s. Today, we’ll only likely see highs of about 52 degrees to 58 degrees, so the atmosphere has far less energy which will limit the overall intensity of severe storms.

While I’m not expecting giant hail as observed almost four years ago, we could see hail larger than quarter-size, which could dent vehicles under the heaviest weather. If this happens, it’s most likely south of Denver, along and immediately northeast of the Palmer Divide. In these areas, there’s even a risk for a weak tornado. But the greatest risk today will be the hail.

Beyond the first forecast for severe weather being issued, Colorado had its first severe storm warning of the season in the at 2:42 a.m. today in Yuma County near the Kansas border. A storm there packed 60 mph wind gusts and large-enough hail to damage vehicles. Important to note: This occurred outside of the heating of the day, a time most typically associated with powerful thunderstorms.

The fact that a severe storm developed outside of that environment demonstrates that the conditions aloft in the atmosphere are conducive for severe storms even before the assist from large CAPE (convective available potential energy, the force which drives updrafts to create strong thunderstorms) levels. That said, without hot weather and big updrafts, there’s only so far a storm can go. 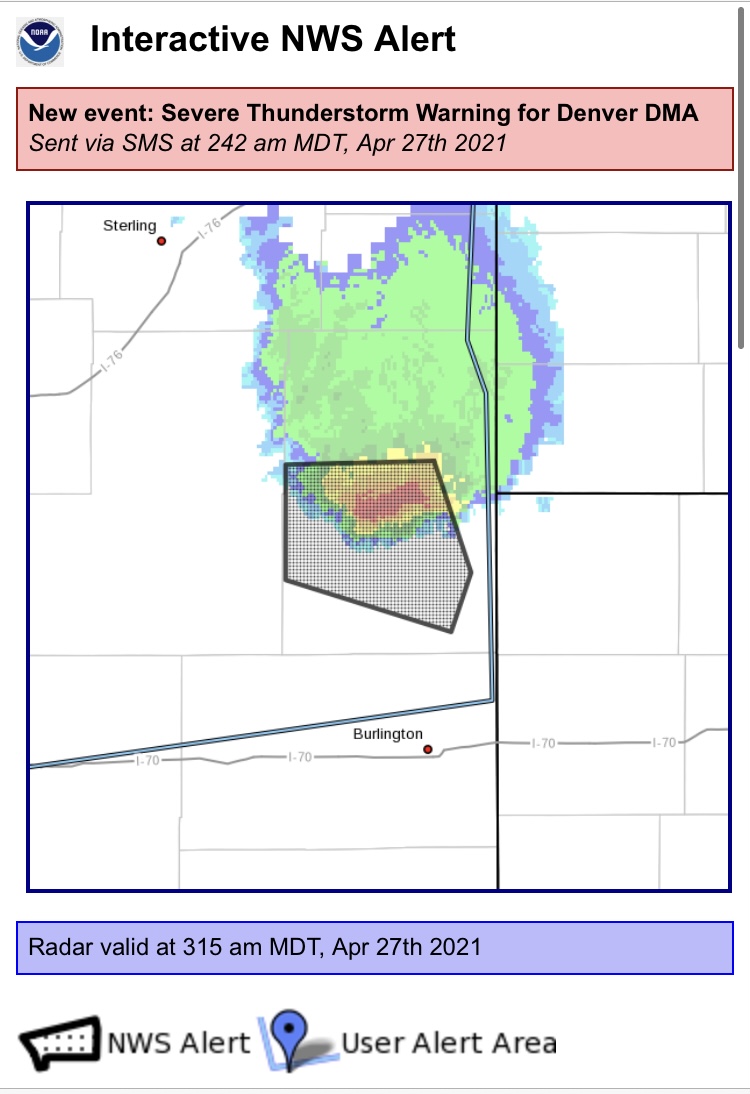 So, Here’s How It Goes Down

A boundary of higher humidity levels has pushed in from Nebraska and will result in a damp feel outside for Denver and the plains. This area of higher moisture will not make it much farther south than the Palmer Divide, with dry air pinned just to our south. This will result in an initiation point where storms are likely to first develop around lunchtime, before making a run to the north and east. Compounding this likely placement for where storms will first form is the topographical feature that is the Palmer Divide, a gentle-sloping from the mile-high level to about 7,500 feet enhances atmospheric lift, resulting in faster formation of towering cumulonimbus storm clouds. Along that boundary, those CAPE levels could reach marginal levels for violent storms. Today is a Pinpoint Weather Alert Day for this potential.

While we’re dodging dark clouds in Denver and the plains, the High Country will be slipping and sliding with a winter storm and over a foot of snow possible along the Divide and over 6″ in the Foothills as the heavy, wet snow develops this evening. Limbs and trees may fall under the weight of the snow, resulting in power outages in communities above 7,500 feet, including Conifer, Nederland and Ward. There, a Winter Storm Warning is in effect from 6 p.m. today to noon tomorrow. While snow levels remain above 8,500 feet today, they will drop tonight to the level of many of our Foothills communities and ultimately to about 5,500-6,000 feet by Wednesday morning. Snow falling in communities from Parker to Roxborough Park, from Evergreen to Boulder should be limited to elevated and grassy surfaces, but a few inches are possible. Even Lakewood, Arvada and Broomfield could see a coating on non-paved surfaces. Denver may mix with snow by daybreak, but no impacts as far as wintry travel lay in our future for the metro-region.

Stay with FOX 31 for updates through the day.

WASHINGTON (AP) — House Republicans ousted Rep. Liz Cheney from her post as the chamber’s No. 3 GOP leader on Wednesday, punishing her after she repeatedly rebuked former President Donald Trump for his false claims of election fraud and his role in fomenting the Jan. 6 Capitol attack.

Meeting behind closed doors for less than 20 minutes, GOP lawmakers used a voice vote to remove Cheney, R-Wyo., from the party’s No. 3 House position, a jarring turnabout to what’s been her fast-rising career within the party.

EW YORK (AP) — Jay-Z, Foo Fighters and the Go-Go's were elected Wednesday to the Rock & Roll Hall of Fame their first time on the ballot, leading a class that also includes Tina Turner, Carole King and Todd Rundgren.

Each will be honored during an induction ceremony in Cleveland on Oct. 30 before what organizers hope is a full house of fans enjoying live music again.

More than 1,000 gas stations in the Southeast report running out of fuel thanks to panic-buying

Emergency program to give people $50 off internet bill

Man questioned by police about identification speaks out

Push under way to get vaccine into more pediatrician’s offices

What are the hottest neighborhoods in the Denver area?