DENVER -- One day after breaking a 75-year-old record with a high of 80 degrees, snow moved into the Denver metro area on Thursday. Temperatures by early Friday morning were expected to fall into the teens.

A rain/snow mix arrived in Denver late Thursday morning. It changed to all snow as temperatures dropped at midday.

Roads became treacherous in the foothills and mountains. Wet conditions and rapidly dropping temperatures forced drivers to slow down in the metro area as well. 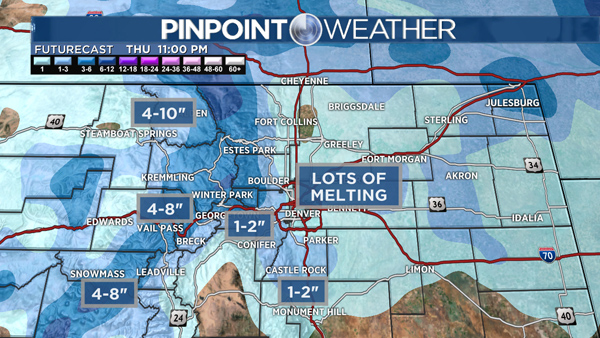 The Palmer Divide and foothills were getting more snow, where more than 2 inches of accumulation were likely.  The snow will end by 10 p.m.

The mountains received the snow first Thursday morning. There will be 4-8 inches in most mountain towns by Thursday night, with a few pockets of 10 inches in the higher elevations.

Denver had gone 36 days -- since Oct. 12 -- without any moisture being recorded at the official reading station at Denver International Airport. And that was only 0.1 of an inch. It has been since July since significant moisture fell in Denver. 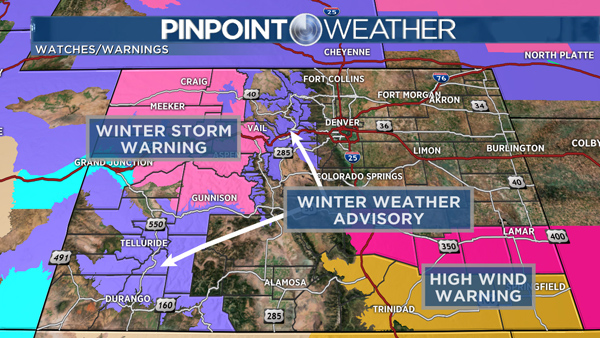 The National Weather Service said the city officially received seven-tenths of an inch of snow at its DIA weather station. That's enough to call it "measurable snow" and bring to an end a string of 199 days since the last measurable snow in Denver.

Once the storm moves out overnight, sunshine and dry weather will return for the weekend, with highs in the 50 and then 60s.

Monday night into Tuesday holds another chance for mountain snow and rain/snow for Denver.

DENVER (KDVR) -- We are still expecting to see high temperatures across metro Denver to reach the low 60s on Saturday. The day will start with plenty of sunshine followed by increasing clouds late.

Sunday will bring slightly cooler low to mid-50s for highs along with more clouds.

DENVER-- Temperatures will jump above average as we end our work week, with highs today hitting the mid-50s. We'll be quiet statewide with a mixture of sun and clouds and breezy conditions.

Our warm up will continue as we start the weekend on Saturday, with highs hitting 60s across eastern Colorado, 30-40s across the high country with plenty of sunshine.

DENVER (KDVR) -- The warming trend continued Thursday across metro Denver. It will continue into the weekend.

Denver will reach the mid-50s on Friday, running about 5-7 degrees above normal. The average high for Feb. 28 is 50 degrees.

US Marine Corps commandant orders removal of all Confederate-related paraphernalia