DENVER — A strong winter storm is going to bring heavy snow and strong wind to Colorado on Wednesday.

The wind will increase substantially with sustained wind by late morning of at least 30-65 mph.

Here are 13 things to expect from the storm from the Pinpoint Weather team.

Interstate 25 is acting as critical weather divider with the heaviest snow and the strongest wind happening east of I-25 — especially on the eastern Plains.

RELATED: Blizzard warnings and what they mean 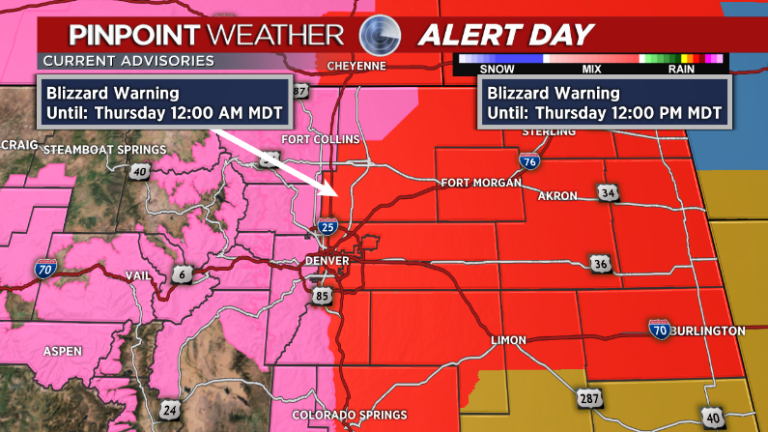 This storm is called a “Panhandle Hook Storm System,” which means it has to do with the storm as it relates to the panhandles of Texas and Oklahoma. Storms such as this often can be warmer and generate strong wind.

The track becomes critical in forecasting a storm such as this. More north means we don’t get as much. Chris Tomer explains more.

3. The biggest threats will be high wind and heavy snow

Regardless of the snow, the wind will be a huge impact with this storm system with sustained wind of at least 30-65 mph.

4. Bull’s-eye will be the eastern Plains

The highest impact of wind and snow occurs over the eastern Plains of Colorado so plan on Interstates 70 and 76 potentially being closed as the storm gets stronger.

5. Blizzard conditions most likely over eastern Plains and Palmer Divide

Blizzard conditions are about the wind and that will be whipping over the eastern Plains on Wednesday as the storm moves through the state.

6. Snow amounts could reach a foot east of Denver

7. Interstate 25 will be the divider

I-25 will play a key role in this storm system. There will be less accumulation in the western suburbs and more accumulation and wind east of I-25.

For example, Lakewood could get 4 inches, while 10 inches could fall at Denver International Airport.

8. A 25-mile shift in the track will affect snow amounts

The track this storm takes is key to how much snow will fall. The tiniest shift in track or timing could play a major impact on how much snow falls.

The forecast is 975 mb while the record is 976.3 mb. Chris Tomer explains more about that means around the 3:30 mark of our Facebook Live.

When the sun goes down, the snow will start to pile up and the evening commute on Wednesday will be a mess.

Again, the wind will be a huge factor in this storm with 40-75 mph wind everywhere creating horrible visibility.

Tomorrow’s evening drive will be virtually impossible. There’s no other way to put it.

Be sure to check flights because there could be blizzard conditions at the airport creating zero visibility along Pena Boulevard and causing several flight delays.

With the blizzard conditions on the eastern Plains, don’t be surprised if I-70 and I-76 get shut down at some point during the day.

(NEXSTAR) — An asteroid about the size of a stadium — or three times the size of the Taj Mahal — is set to speed past Earth on Saturday.

The asteroid, called "2008Go20," is hurtling towards Earth at 18,000 mph, according to NASA. Nevertheless, the agency says there's no reason to worry.

LARIMER COUNTY, Colo. (KDVR) -- It’s been a tough week in Poudre Park at the Columbine Lodge.

News of the flood shut down parts of the road this week, but they have since reopened.

DENVER (KDVR) -- Showers and thunderstorms will again move off the foothills and across metro Denver and the Front Range this evening. There will be a chance for heavy rain with any of the passing storms. And, that will keep flash flood concerns elevated over burn scars in the high country.

We are expecting more showers and thunderstorms over the weekend. The highest chance will be on Saturday due to a cold front which will keep temperatures out of the 90s for the first time in a week.