CANON CITY, Colo. — If “Deflate-Gate” wasn’t enough, the NFL has another problem on its hands.

A huge Dallas Cowboys fan who is also an inmate at the Fremont Correctional Facility in Cañon City has filed a lawsuit against NFL officials because of an overturned call in the Cowboys’ NFC Divisional round playoff loss to the Green Bay Packers on Jan. 11.

Hendrix filed the handwritten lawsuit Wednesday in the wake of a controversial replay reversal in the Cowboys’ loss to the Packers, WFAA reported. Cowboys receiver Dez Bryant made what was ruled on the field to be a catch on a fourth-down play in the fourth quarter that would have set up Dallas at the 1-yard line.

But the Packers challenged the call and it was ruled Bryant didn’t “complete the process” of the catch. The ruling was overturned and Green Bay got the ball and held on for the win.

He asks for the large sum of money “for but not limited to: negligence, breach of fiduciary duty, and also reckless disregard.”

In the lawsuit, he said the review and reversal were a “fraud” and a “gross negligence” that caused “true injury” to the Cowboys and their fans.

“Dean Blandino, Gene Steratore, and Roger Goodell are wrong and have stolen a victory from the plaintiffs,” Hendrix wrote in the lawsuit. “The Cowboys’ offensive line would have perfectly created an ‘Autobahn’ for DeMarco Murray to drive into the endzone for the score and victory.”

It appears Hendrix came up with the large figure by having it begin and end with 88 — Bryant’s jersey number.

Hendrix says he will appear as counsel for “Dez Bryant, all Dallas Cowboys fans and all people in or from the sovereign republic of Texas.” 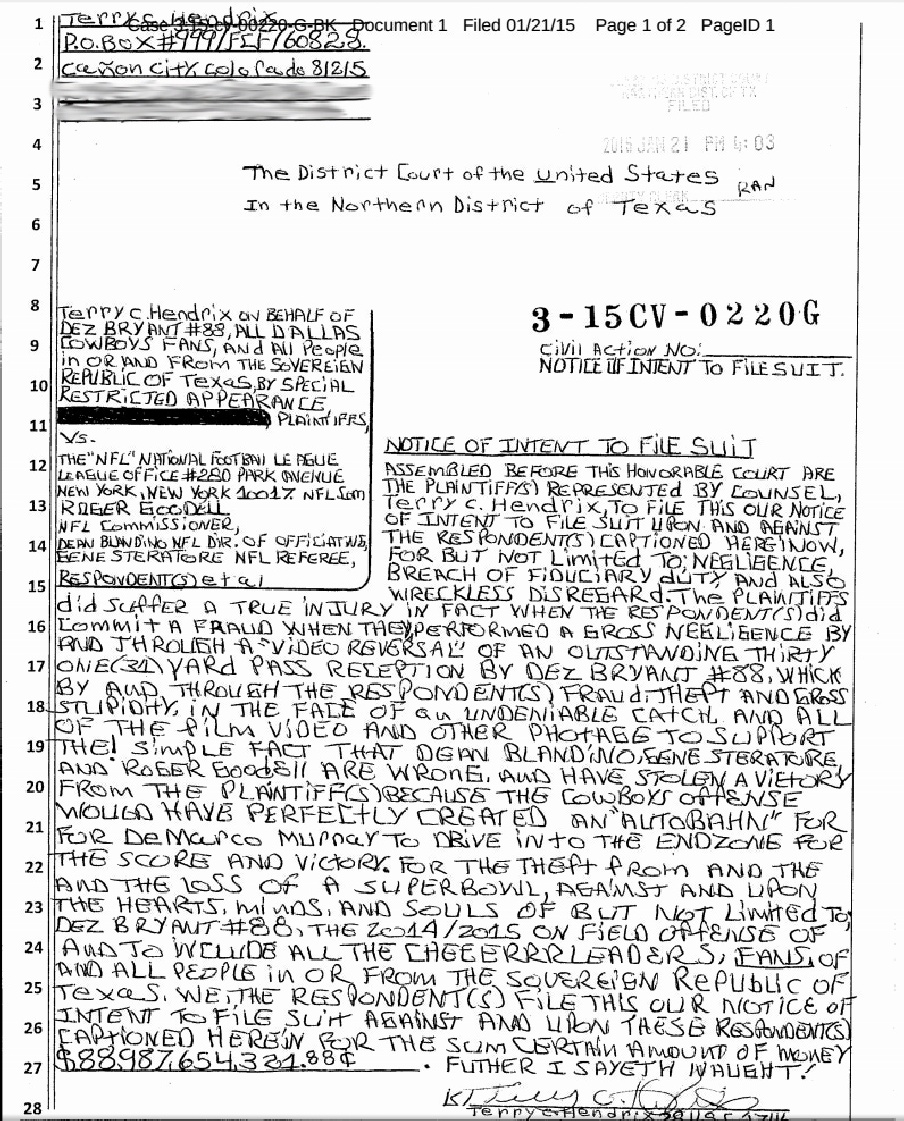 LAKE BUENA VISTA, Fla. (AP) — The Los Angeles Lakers are a victory away from returning to the NBA Finals — and only another comeback from 3-1 down by the Denver Nuggets can stop them.

Anthony Davis scored 34 points, LeBron James had 26 and the Lakers beat the Nuggets 114-108 on Thursday night in Game 4 of the Western Conference finals.

DENVER (KDVR) - The Pac-12 Conference will play football this fall. The conference announced Thursday evening that games will be played starting Nov. 6 instead of the original postponement to the spring. Each team will play seven games, with the Pac-12 championship game being played on Dec. 18.

“This has been the result of what we said back in August, with all of the science and all of the data and all of the advice from our medical experts. And we know how badly our student athletes want to compete. We only would do so when we felt it was safe to do so," said Larry Scott, Pac-12 commissioner.

DENVER (KDVR) - Blake Bortles made his practice debut for the Broncos on Thursday, but Jeff Driskel remains on track to be the starter on Sunday.