DENVER -- The city of Denver will celebrate the Broncos' Super Bowl 50 win on Tuesday. All events are free.

FOX31 Denver will have live coverage on TV and on KDVR.com starting with "Good Day Colorado" at 5 a.m., followed by Everyday at 10 a.m., and special parade coverage from 11 a.m. to 3 p.m.

Attendees are asked NOT to bring the following: 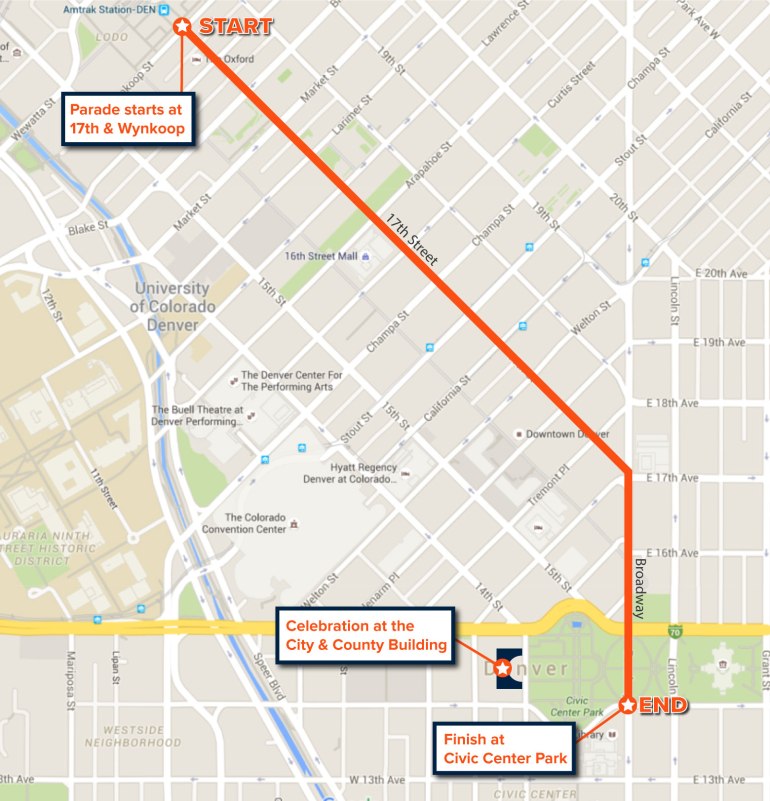 On Monday, city crews were busy painting an orange and blue strip down the parade route.

City officials were also busy preparing Monday for security during the parade.

All of these bus routes will begin detouring upon request by the Denver Police Department around the parade route to get passengers as close as possible to the normal routing.

All F, H and D line service will end at the Convention Center. All downtown stations will be closed upon request by Denver police as crowds and safety issues dictate. A train shuttle will run between 30th/Downing to 20th/Welton. All C and E line service will run a regular schedule to and from Union Station.

Officials anticipate detours will begin by 9 a.m. with the earliest detours to begin in the area of Civic Center Park and expanding to the areas around the parade route.

Because Civic Center Station is along the parade route, the station will be closing in the morning as crowds and safety dictate.  The 16th Street Mall Ride service will also be suspended at some point, officials said, depending on the crowds and safety guidelines.

RTD will be operating on a normal weekday schedule until the detours take effect once police close streets and intersections, and will resume normal routing and schedules as streets reopen.

MIAMI -- Broncos safety Steve Atwater was voted into the Pro Football Hall of Fame on Saturday, sources report. Atwater was an essential part of the Broncos Super Bowl win in 1998, and helped lead the team to another Super Bowl victory the year after that. Atwater is also an eight-time Pro Bowler, was named to the First-Team All-Pro team twice and a part of the NFL 1990s All-Decade Team.…

ARAPAHOE COUNTY, Colo. -- Australian-born Adam Gotsis continues to do his part to help with recovery efforts in his home country in wake of the massive fires. On Monday, he teamed up with a couple of fifth graders at Wilder Elementary School in Arapahoe County to make another play at helping the billions of animals that are being affected in Australia. After watching some YouTube videos of misplaced koalas going…