ENGLEWOOD, Colo. -- The NFL has suspended Denver Broncos defense end Derek Wolfe for the first four games of the 2015 season due to a violation of the league's policy on performance enhancing substances, the team confirmed Friday.

The team and Wolfe released a joint statement on the suspension just before noon.

Specifically, Wolfe said the violation occurred when he took medication this off-season that is on the league's banned substance list. Details about that medication were vague, but Wolfe insisted it "is not a substance which would enhance my on field performance in any way."

"I genuinely was unaware that it was prohibited, but players are responsible for what is in their bodies," Wolfe said. "I will certainly exercise far greater caution in the future and will seek advice relating to the permissibility of any and all medications."

Wolfe will be entering his fourth NFL season in 2015, and missed four games in 2013 after being hospitalized for seizures. He was able to participate in all of the team's games last year, though he was less productive from a statistical standpoint.

Wolfe's most productive year came in his rookie 2012 campaign, in which he logged 40 tackles and six sacks. In total, Wolfe has logged 91 tackles for the Broncos to go along with 11.5 sacks in three seasons.

A starting defense end for the Broncos when healthy, Wolfe will be absent for an important 2015 AFC West matchup against the Kansas City Chiefs and a prime-time game against the Detroit Lions.

Wolfe will be eligible to participate in offseason and preseason practices and games until his suspended goes into affect during Week 1 of the NFL season, when the Broncos face the Baltimore Ravens on Sept. 13.

Wolfe will be eligible to return for the team's Week 5 game against the Oakland Raiders on Oct. 11.

Noted for his motor and work ethic, Wolfe offered an apology as part of his statement regarding this suspension.

"Please allow me to offer my most sincere apology to everyone in the Broncos organization, and especially to my teammates and our fans," Wolfe said. "I’m very disappointed that I can’t help my team for the first four weeks of the season, but I look forward to a great season with the Broncos and can't wait to get back on the field in week five."

Derek Wolfe also posted a statement on his Instagram profile shown in the screenshot below. 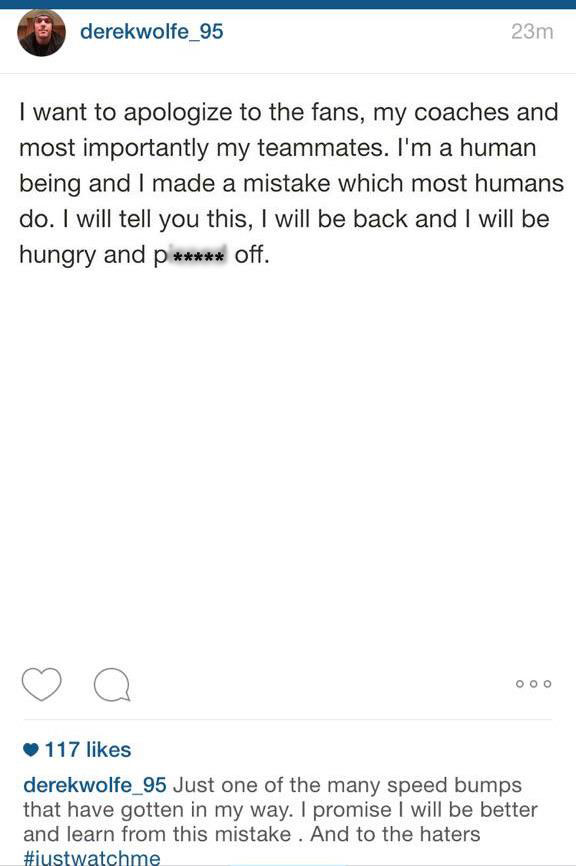 MIAMI -- Broncos safety Steve Atwater was voted into the Pro Football Hall of Fame on Saturday, sources report. Atwater was an essential part of the Broncos Super Bowl win in 1998, and helped lead the team to another Super Bowl victory the year after that. Atwater is also an eight-time Pro Bowler, was named to the First-Team All-Pro team twice and a part of the NFL 1990s All-Decade Team.…

ARAPAHOE COUNTY, Colo. -- Australian-born Adam Gotsis continues to do his part to help with recovery efforts in his home country in wake of the massive fires. On Monday, he teamed up with a couple of fifth graders at Wilder Elementary School in Arapahoe County to make another play at helping the billions of animals that are being affected in Australia. After watching some YouTube videos of misplaced koalas going…