BALTIMORE — Janay Rice, the wife of suspended Baltimore Ravens running back Ray Rice, took to Instagram on Tuesday morning to defend her husband.

The statement came one day after a shocking video was obtained and released by TMZ that showed Ray Rice punching his then-fiancee in the face inside an elevator of an Atlantic City, N.J., casino. 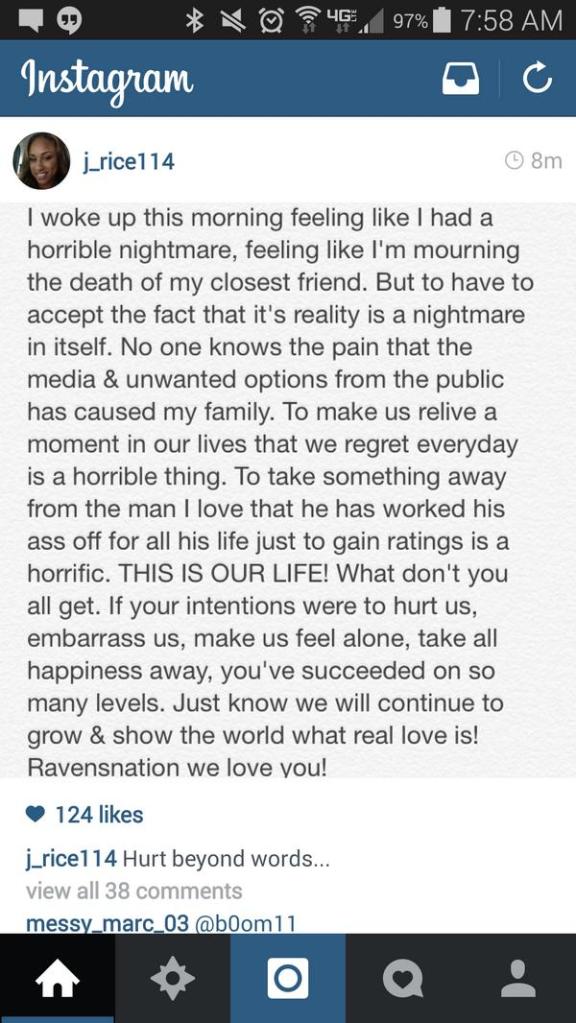 As part of her statement, Janay Rice said: “If your intentions were to hurt us … you’ve succeeded on so many levels.”

Previously, only video from outside of the elevator, showing Ray Rice dragging Janay Rice (then Janay Palmer) out of the elevator, was shown. But Monday’s video prompted outcry at the NFL, which only suspended Rice the first two games of the season.

The Ravens terminated Rice’s contract and the NFL then suspended Rice indefinitely.

TMZ Sports reported Tuesday that sources with the now-shuttered Revel Hotel and Casino told it that no one from the NFL asked for the video from inside the elevator from the Feb. 15 incident.

In a statement, the NFL said, “Security for Atlantic City casinos is handled by the New Jersey State Police. Any videos related to an ongoing criminal investigation are held in the custody of the state police. As we said yesterday: We requested from law enforcement any and all information about the incident, including the video from inside the elevator. That video was not made available to us.”

The Ravens also said they never saw the new video. When asked why the team didn’t view it sooner, coach John Harbaugh said Monday night, “I don’t know why that would be a hard thing to understand. It wasn’t available. It wasn’t there for us. It wasn’t something that we ever saw or had access to.”

Meanwhile, The Associated Press reported it had viewed a higher-quality video provided by a law enforcement official, and that the couple could be heard shouting obscenities at each other. According to the AP, after Janay collapses, Rice drags her out of the elevator and is met by some hotel staff. One of them can be heard saying, “She’s drunk, right?” And then, “No cops.” Rice doesn’t respond.

In July, Rice was suspended for two games for domestic violence, a punishment that was widely criticized as too lenient. The league said Monday it had not seen the video from inside elevator despite requesting it.

“We requested from law enforcement any and all information about the incident, including the video from inside the elevator,” NFL spokesman Greg Aiello said. “That video was not made available to us and no one in our office has seen it until today.”

Rice, 27, was charged with felony aggravated assault but he was accepted into a pretrial intervention program in May that allowed him to avoid jail time. The charge could be eventually purged from his record.

A spokesperson for the Atlantic County Prosecutor’s Office told ESPN on Monday: “Mr. Rice received the same treatment in the court system that any first-time offender in similar circumstances has received. We have no comment beyond that.”

Rice’s lawyer, Michael Diamondstein, declined to comment when contacted by The Associated Press.

Turkish inflation eases for 1st time in more than …

Turkish inflation eases for 1st time in more than …

Need a gift you can easily pack? Give them a scarf …

Broncos lose to Ravens 10-9 in another close game