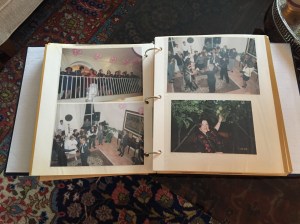 Photo albums, do you still use them?

Now when a milestone approaches in your life, there’s a new social obligation most of us add to our ‘to do list.’  No longer do most of us collect and put our photos in albums to pass around and share with guests.  Instead, we post.  Photos, comments, ticket stubs, you name it, on Facebook or Twitter or Instagram.

“It’s called an external factor,” says Ron Spreeuwenberg, CEO of HiMama “whenever you have a major event the presumption is you’ll post details. Like if you’re having a child, when is that child expected, what are you doing to prepare, is it a boy or a girl, when will you share that first photo?  And if you don’t post, you’re the odd person out.”

It’s part of this tug of war parents have with their online relationship and how that exposure could affect their young children that prompted HiMama to release details of their inaugural study, Parents in a Digital Age 2015 this week.

The report is based on a survey of over 400 parents in the United States and Canada. Spreeuwenberg says the findings show what he describes as a “mis-alignment of their personal feelings about sharing their kids’ information online.”

Here are some of the key results:

“There is a small segment of the population, less than five percent,” says Spreeuwenberg, “who are uber sensitive to posting anything online about their children. They are voicing their concerns about privacy and security and want to make sure their kids aren’t exposed online at all.  But while the rest of the population may have issues, they haven’t taken this hard line approach.”

I know I grew up in a time when photo albums, kept in our family’s living room, held every single picture of special moments in the life of my parents, my siblings and my relatives.  We grew up sending prints of school photos in the mail to loved ones to mark the new year.  I remember making double prints every time I had my photos developed, to share pieces of my life with my family.  Now those photo albums are in a closet, and adding new pictures in such an album is an exercise I promise I’ll do sometime, but I’m not sure when.

I cannot recall the last time I sent a photo in the mail, Christmas cards don’t count, when I can so easily upload any image from my phone or camera directly to a social media site.  And that’s part of the issue, according to Spreeuwenberg.

“The dominant channels for sharing photos of children were Facebook and other social networks, as well as email, which dwarf the other methods for sharing photos. This is an interesting result when contrasted against parents’ concerns about digital security and privacy for their children. While a private password protected site would be a much safer way to share photos, for example, a much smaller percentage of surveyed parents actually used this channel. So while many parents feel they don’t have an alternative to posting online, that’s really not the case.”

There are options, but not as easy and fast as uploading and posting, that’s for sure. As parents, we might feel free to go ahead and share those images as part of our own history, but there is one place where we are clear we want a say, in our child’s school or day care program.  And the only way we know for sure is to ask about each institution’s policies.

The line between being relaxed about exposing our children online to taking it more seriously is blurry for many of us. We’re okay sharing when we want to share,  most of us are not okay when someone else shares without us knowing, especially when it comes to our kids.