Is there any better time of year than the beginning of your sports team’s season? That’s how I’m feeling today as I reflect on the first six Colorado Rockies games.  I am pumped, I am psyched, I am hopeful. 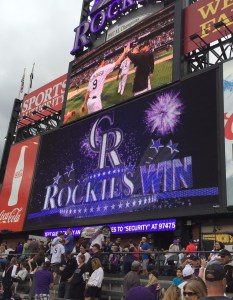 Every season, we fans start over.  No matter what happened the previous year, or years, we believe that this could be the season we’ll see our team go all the way. Some pick win-loss records on opening day, others get into a routine where what they wear on game day matters,  others go through a series of rituals to repeat whatever they did on game winning day, or change whatever they did on game losing day.

I’m a fan.  Growing up with four brothers who’d listen to games on the radio, raising three sons who all played the sport, and covering sports in San Francisco, Denver and Houston, I’ve grown to love the month of April like no other. 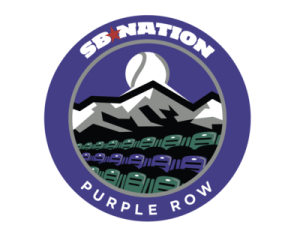 It’s fun for someone like me to track with  Purple Row online, where even I can write a fanpost or create a fanshot.  Writer Drew Creasman says that’s because the site is for both the hard core and casual fan, and that includes “anyone who has a passing interest in the game.  My brother loves baseball but he doesn’t have the time to watch, so he asks me about the team. He’s what you call a casual fan, but still a true fan,” continues Creasman. “I know some hard core fans get frustrated by what they describe as bandwagon fans, but I believe everyone gets to define their own fandom.”

Don’t you love having your own fandom?  It’s even a word, defined by Merriam Webster as ” (1) all the fans (as of a sport) and (2) the state or attitude of being a fan.” 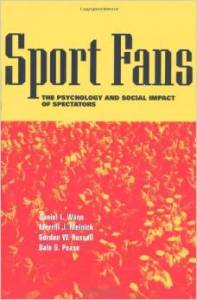 Daniel Wann, a psychology professor at Murray State University has written Sport Fans: The Psychology And Social Impact Of Spectators :

It is important to remember that fans are driven by a variety of motives. You can’t paint them with one brush stroke. Some are driven by the entertainment of the sport, some want to see a good contest. Some are there for social reasons, while others are there to see beautiful plays.

Sports fandom is very social and 98 percent of the fans who attend  a game meet up with other people going to, or at the game. It is more than just an event because it is voluntary. Where else do you spend big money and have a 50-50 chance of being displeased (if the team loses)? If you order pizza and it is delivered cold three times in a row, you won’t order from that business again; not so with sports fans. 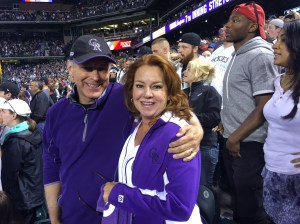 My good friend Kelli Miller lives and breathes Rockies purple.  For her birthday this weekend she was at the Rockies game against the Cubs, of course.  They lost on Saturday, the day she wore this brand new Rockies jersey, “and I will never wear it again.  Ever!  Bad luck.”  She’s actually completely tuned into every item that’s broadcast, televised, written, tweeted and shared about the Colorado Rockies, and had to very loudly (and correctly) tell me to stop yelling, “Go CJ, you rock!”

“Who’s CJ? It’s DJ, you dork,” she said laughing at me.  That would be DJ LeMahieu, second basemen and unstoppable hitter for the Rockies in these first six games.

Superstition is huge for baseball players and fans alike.  Creasman says that’s in part because as fans, “we believe that we can actually impact the game.  Last week, I was wrapping up a story on the Rockies when everything changed in the 9th, and it went into extra innings.  I deleted my entire story and even switched the couch from where I was writing the story. I didn’t write another word until the game ended, and thankfully the Rockies won!”

As a Rockies fan you probably know that when Jason Giambi played for the team, and every other team he was on, if he was in a slump it was the gold thong to the rescue.  Seriously! For former Rockies great Larry Walker it was the number 3, his jersey number 33, and everything he did circled around 3’s.

Something about knowing how important it is for players to win, even with strange rituals, connects us more deeply. 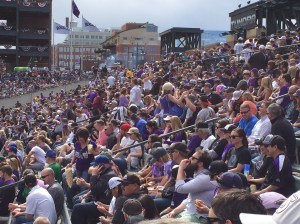 And you know what else connects fans?  Losing.  While I don’t like hearing that, Creasman refers to “how sweet it is when a struggling team has success.  Rockies fans may moan about the last four seasons, but we don’t have anything on other major league teams who’ve been losing as long as the Rockies have been around.”  How about 20 losing seasons in a row for the Pittsburgh Pirates, 16 for the Philadelphia Phillies, and 15 for both the Boston Red Sox and the A’s?

Dr. Wann has a point about the comradery that, win or lose, actually rings pretty true for me:

Fans who make a connection with a local team have better societal connections. Identification with local teams have been shown to be related to lower depression, lower loneliness and feelings of alienation, higher self esteem, higher energy levels and greater levels of trust in people, as well as greater satisfaction in social life.

Well, maybe.  When I left Coors Field on Saturday night, I wasn’t really bonding with other fans, I was frustrated.  And with the tough loss on Sunday, I’m heavy hearted.  But I guess I’m not alone.  The Rockies do well on the road, but their next 25 games are against division rivals.