One boy, he was able to skate holding my hand, but he would not skate alone. I said, please your legs won’t break, the ice is right here. Please do one step for me.  And then he tried a step.  He smiled and he did it and he took a second step and a third and shouted, ‘I can skate, I can do it alone.’ From this moment he skated alone. And he was able then to learn to read and write. Until this moment he couldn’t. There was a knot in his brain. It’s not only a sport for him it’s important for his life. 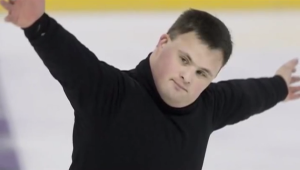 Elisabeth Sieber, Figure Skating Coach with Special Olympics Austria, describing what happened when one of her young skaters learned to skate on his own.

Sieber captures the spirit of Special Olympics which shifts the focus to what these athletes can do, not what they can’t.  In our state, Special Olympics Colorado is a year-round program with four sport seasons,  each coming together in a statewide competition.

Mindy Watrous, CEO of Special Olympics Colorado says “our goal is to bring people with intellectual disabilities together to shatter stereotypes.”

Intellectual disability is the most common disability, impacting more than six million people in the United States.  According to Special Olympics,

it’s a term used when a person has certain limitations in cognitive functioning and skills, including communication, social and self-care skills. These limitations can cause a child to develop and learn more slowly or differently than a typically developing child. Intellectual disability can happen any time before a child turns 18 years old, even before birth.

One of the hardest things families experience with their children who have intellectual disability is watching them excluded from activities.  With Special Olympics, that divide is crossed and they get to have the same experiences as families who have children without intellectual disabilities.  In research by Special Olympics regarding family dynamics, there were two major conclusions.

First, Special Olympics operates as a powerful engine of connection for the families of athletes, providing opportunities for families to forge new relationships and strengthen existing ones both within the family and with others. Second, the organization provides athletes and their families with normative life experience that are critical to healthy development.

To that end, Special Olympics Colorado has been working on a three-pronged approach to help schools become more inclusive through Project Unify.

First:  Unified Sports.  With sports like flag football, basketball and soccer, just to name a few, everyone gets to be part of the schedule. They can letter in the sport and they become part of the school’s unified partners, not just helpers.  They’re playing together as a team.

Second:  Youth Leadership.  The leadership activities help students with and without intellectual disabilities find their voices by teaching them to become change agents striving for respect and inclusion.

Third:  Whole School Engagement.  Students of all abilities have the power to positively impact their school communities by promoting social inclusion.

“We work with children from preschool through high school and encourage families to get involved in community based programs,” adds Watrous, “we’re creating leaders and self-sufficient adults who are giving back.”

And that’s the incredible difference Special Olympics makes for everyone involved.  “On average,” says Watrous, “ten percent of people with intellectual disability are able to work. But when these same people are involved in Special Olympics, that number jumps to 60%,” suggesting a strong relationship between those who participate in Special Olympics and the ability to be employed.

The Mighty website was created by writers, producers, editors and developers “because we all believed that a media company could be more than a business. At its best, it could actually help people.” Last October, they used their Facebook page to ask the question, “In one sentence, what makes Special Olympics so important?”

Here are just a few of the responses:

The looks on their faces because they can do it.

It gives my daughter who has down syndrome the chance to play sports.

It gives every athlete the encouragement of a crowd, the satisfaction you get from hard work, and the emotion and mind frame of knowing that anything is possible.

It’s not about disabilities, it’s about abilities!! 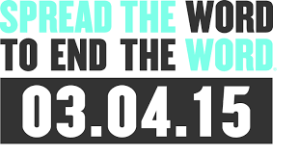 Watrous says March 4th is their annual day of awareness with Special Olympic’s  Spread the Word to End the Word campaign.”We’re taking the message everywhere, but particularly in schools, to encourage everyone to stop using the words ‘retarded’ and ‘retard’ because they’re so hurtful. We’re in 170 schools in Colorado this year with videos, assemblies, t-shirts and getting students to take the pledge to stop using those words.”

For families living through each day with a child with intellectual disability, they are too aware how isolating life can be without support.  That’s why it’s been heartwarming to see thousands taking part in thePolar Plunge  for Special Olympics Colorado over the last few weeks. That’s right, people get the chance to raise money for Special Olympics athletes by jumping in totally frigid water.  Some people even come in costume, or with a team. There have been four Polar Plunges so far, with one more scheduled at the Boulder Reservoir on March 7th.

With all the great work Special Olympics Colorado is doing serving 16-thousand people throughout the state, most of their funding comes from individual and corporate donations.  If you’d like to consider volunteering or contributing to their effort, there are a number of ways to give, click here for more information.