Aurora, CO– An Aurora  man is lucky to be alive after someone threw a rock through his windshield while he was driving. 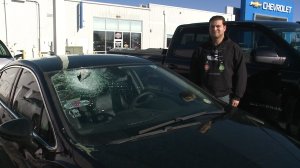 “I was actually still picking glass out of my hair the next day after I took a shower,” said Chris Hayden.   The 31-year old was driving on Peoria Street just north of Alameda Avenue Saturday night around 6pm when he saw a person standing on the side of the road as it was snowing.

“This figure takes up a position, a throw position and I`m thinking he`s going to throw a snowball,” said Hayden, who said the snowball turned out to be rock the size of a softball, “When the rock hit the windshield, my ears were actually ringing.”
The rock crashed through the passenger side of his windshield, bounced of the the front passenger seat and landed in the foot well. 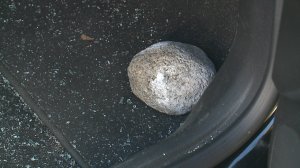 Hayden did a u-turn to chase the suspect but lost sight of him when the man ran into the nearby Aurora Hills apartment complex. 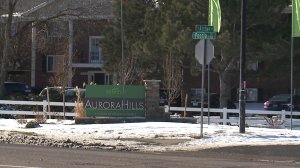 “This person I`m fairly certain does not know me.  I did not do this person any wrong…. I fail to see how this is entertaining,” said Hayden.

Even though Hayden still has the rock in his car, Aurora Police tell Fox 31 the odds of getting DNA or fingerprints are next to zero, since the suspect was probably wearing gloves.

Police were not able to respond to Hayden’s near crash Saturday night because they were on accident alert due to the snowstorm that evening. 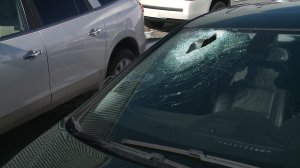 “I`m hoping that somebody eventually hears somebody talking about it and has the conscience to come forward and say ‘I know who did this’ because this isn`t funny. This is a situation where if I had had my girlfriend in that side seat this would`ve been a very different story.”

Grade point averages went up for graduating seniors, but districts made accommodations