DENVER (KDVR) — On Tuesday the eastern plains of Colorado experienced several landspouts. Some were captured on video, featuring dusty bases and twisting winds, pulling dirt upwards, all the way into the clouds above. While they’re fairly rare around the country, landspouts are very common here.

These landspouts may resemble tornadoes but are far weaker and form quite differently. They pack winds well below 100 mph, unlike their violent counterparts which can easily exceed 250 mph. They’re also often much shorter-lived, often lasting under ten minutes.

From tornadoes to hail to snow, areas near Denver had quite a day Tuesday

However, they can still cause damage, pulling poorly constructed out-buildings apart, but rarely do they rate above EF0 to EF1 in the damage intensity scale with winds between 65 and 110 mph. However, very rarely, landspouts can reach EF3 intensity with winds of 150 mph.

While often quite weak and otherwise un-notable, there can be those rare and much stronger exceptions, and should always be monitored carefully. (EF is an abbreviation for Enhanced Fujita Scale. Dr. Fujita developed the F-scale, From F0 to F5, to describe damage done to structures by tornadoes. The enhancement was later applied to more accurately account for damage and features slightly different thresholds.)

Unlike tornadoes, landspouts are not always associated with thunderstorms. They often form from large dust devils. Due to their ability form without a storm present, they can occur on days when no severe weather in the forecast. Dust devils can spin-up under a blue sky as a warm, dry updrafts of air (known to pilots as thermals) become organized into a vortex. Sometimes they can be pulled into the base of a weak thunderstorm cloud, or just a puffy, cumulus cloud, by the larger-scale updraft. Essentially the, dust devil feature joins with the cloud to create what appears to be a tornado. While it looks like a duck, it doesn’t quite quack like one.

So how exactly are landspouts different than tornadoes? 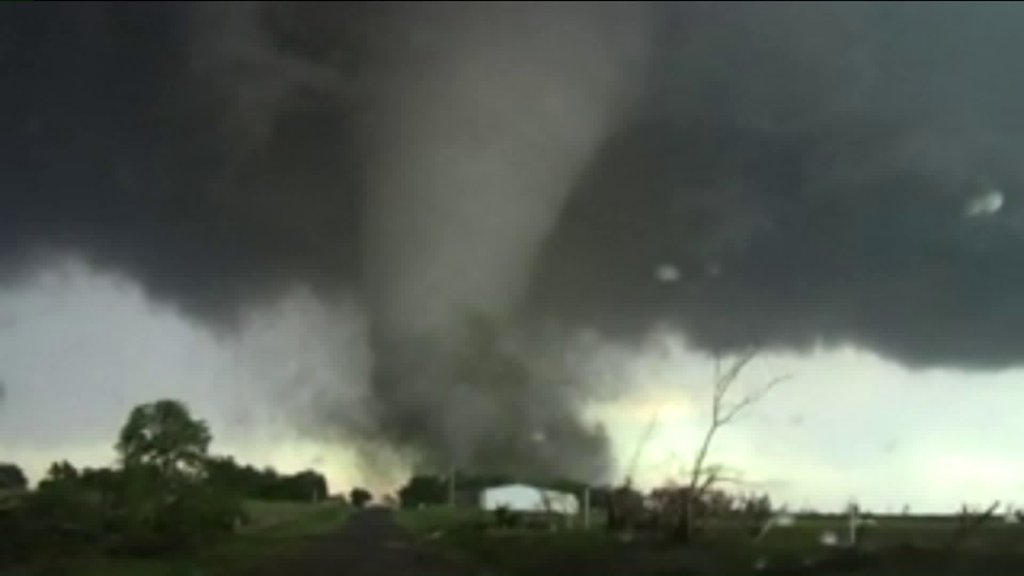 Tornadoes can easily destroy entire neighborhoods and form when upper-level jet stream winds and wind shear lower in the atmosphere combine forces with the presence of fast-rising air in the updraft under a severe thunderstorm. They form from the cloud and then reach to the ground, while landspouts form on the ground and reach up to the cloud. Because tornadoes tap energy sources far greater than those found on the ground with landspouts, they can be devastatingly more powerful.

Landspouts are only visible when they spin-up dust from the ground, while tornadoes are visible due to condensation of previously evaporated water vapor, when the funnel lowers atmospheric pressures so sharply that a cloud (condensation) forms around the funnel. When a tornado touches down it lifts debris and dirt but often much more, making it look opaque and darker than a landspout, which can often look transparent.

Because tornadoes form when winds at the cloud-level begins to spin, meteorologist can easily spot the rotation using doppler radar. But, as landspouts from the ground they’re often below the radar beam and go undetected. Often, a storm chaser must see one with photo/video evidence, for a warning to be issued by the National Weather Service. Even then, because of their short lives, often a warning for a landspout will not be issued as it’s assumed it will have dissipated by then.

Finally, landspouts do share a similar name with water spouts, but unlike its ocean-, lake- or pond-born brethren, they form in a totally different way: instead of dry, hot air causing a rising column or air, waterspouts form when very warm water (relative to the surrounding air) and very high humidity conditions cause a column of air to rise, spin and form a vortex capable of pulling sea spray into a visible funnel. These too are quite weak, often far less than 75 mph and short-lived but can sometimes be stronger if they’re born from a cloud, essentially becoming a tornado over water, or a convective waterspout.

Landspouts make for dramatic pictures and video and while classified as tornadoes, are a different phenomenon with often much fewer damaging impacts. For more info on landspouts, check out this link by NOAA.

‘There is a future for Club Q’: Owner speaks

What’s next for Club Q?