YELLOWSTONE NATIONAL PARK, Wyo. — A father and a son visiting from another country put a baby bison in the back of their SUV at Yellowstone National Park and drove it to the park ranger station.

EastIdahoNews.com reported the two told rangers they believed the bison was “freezing and dying.”

“They were demanding to speak with a ranger,” said Karen Richardson, who was chaperoning fifth-graders on a trip to the park. “They were seriously worried that the calf was freezing and dying.”

Another parent told the two to remove the bison from the vehicle.

“They didn’t care,” Rob Heusevelet told EastIdahoNews.com. “They sincerely thought they were doing a service and helping that calf by trying to save it from the cold.”

The rangers took the bison back to where it was found and the tourists were issued a citation. Another tourist snapped a photo of the bison in the vehicle.

Rangers said people should stay at least 25 yards from bison.

Richardson took a photo of the bison and posted it to Facebook. 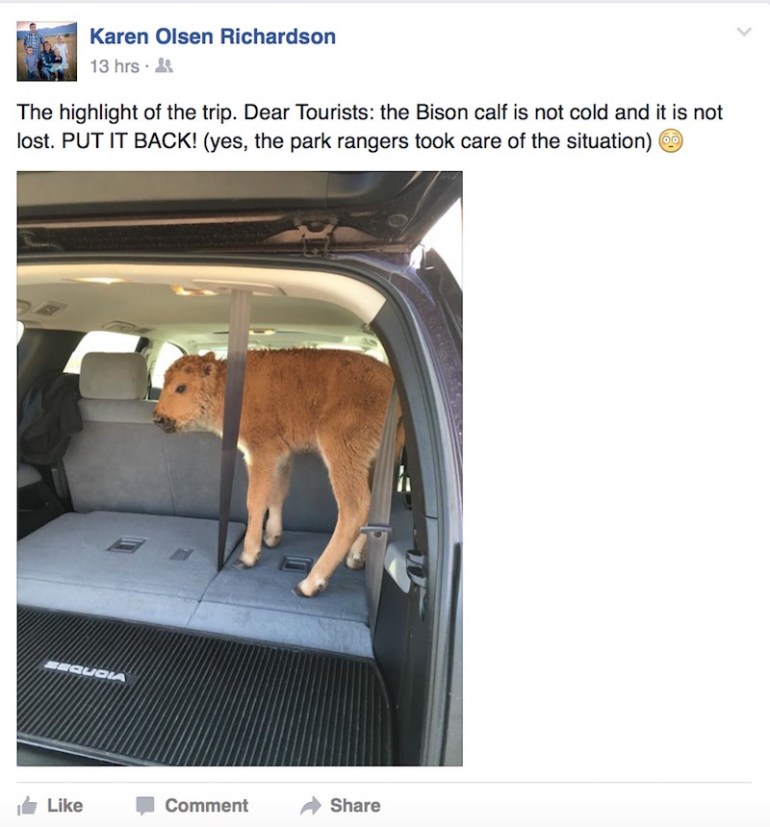 DENVER (KDVR) -- The interstate was like a parking lot over the weekend as crowds rushed to the mountains to get a glimpse of fall colors.

From kids and pets with golden leaves painting backgrounds of photos to breathtaking landscapes. Some photos were simply couples "falling in love" with the foliage.

DENVER (KDVR) -- The Denver Broncos played in front of less than 5,000 fans during Sunday's game at Empower Field at Mile High. One group of "fans" in the stands during the game against the Buccaneers were cutouts of characters from the hit show, South Park.

According to ESPN's Jeff Legwold, there were more than 1,800 South Park cutouts.

MALIBU, Cal., (WTVO) -- NFL Hall of Fame quarterback and his family had a scare Saturday evening when an intruder entered their home and attempted to kidnap one of his grandchildren.

According to TMZ, the intruder grabbed the child out of a woman's arms and rushed away to another part of the house where she was confronted by Montana and his wife.