(CNN) — The Duke and Duchess of Cambridge released two photos of Prince George to mark his seventh birthday on Wednesday. The images, captured by Kate earlier this month, show the young royal looking just like his father as he flashes a gap-toothed grin.

One is a portrait of George smiling at the camera, while the other shows him outside enjoying nature in a camouflage T-shirt.”The Duke and Duchess of Cambridge are delighted to share two new photographs of Prince George ahead of his seventh birthday tomorrow,” said a statement released by Kensington Palace. 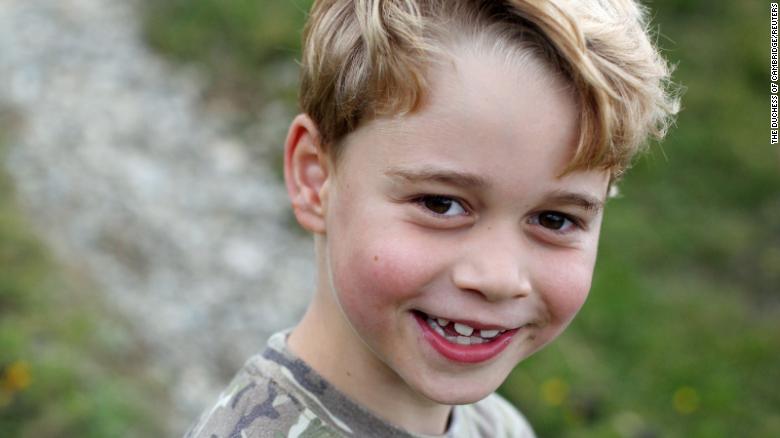 The young royal is seen enjoying nature in a photo taken by his mother, the Duchess of Cambridge.

The Cambridges have made several appearances during the coronavirus pandemic. Earlier this month, Kate and William visited the Queen Elizabeth Hospital in King’s Lynn to mark the 72nd anniversary of the UK’s National Health Service and thank staff for their work during the pandemic.

Last month, Prince William revealed he had been volunteering to assist people struggling with mental health issues during lockdown, fielding texts from those reaching out to Shout, the United Kingdom’s first 24/7 crisis text line.

The duchess volunteered to help with “check in and chat” calls for those who are self-isolating or vulnerable as part of the Royal Voluntary Service’s NHS Volunteer Responders program.

In April, “Their Royal Highnesses and their family visited the Sandringham Estate where they packed up and delivered food parcels to isolated pensioners in the local area,” according to Kensington Palace.

The couple also dialed into a call with Casterton Primary Academy in Lancashire, northwestern England, which had remained open for children of key workers.

Emily Visnic, in West Palm Beach, Florida, was about to load her washer when she saw snakeskin, WPEC reported. She figured it was snakeskin clothing, so she reached inside the machine.

SAN ANTONIO (KAMR/KCIT) — Whataburger, with its iconic orange brand, is taking its food on the road.

The company is celebrating its 70th birthday with the launch of a state-of-the-art Whataburger Food Truck.

50+ of the best breweries in Colorado

DENVER (KDVR) -- Friday is International Beer Day. While Colorado may be known for its extensive outdoor activities, beer is still a calling card for the state.

Originally started in Santa Cruz, California, Beer Day began to celebrate the craft of brewing and to show appreciation for those involved in the making of beer.

Polis extends eviction protections day before they were set to expire

Denver couple displaced after air compressor flies into their home

DU postpones fall sports until spring due to coronavirus pandemic

Mountain West postpones football, other fall sports due to COVID-19

The heat quickly returns and sticks around