SPRINGFIELD, Ill. — An Illinois church is reminding Chicago Cubs fans of a promise they might have made during Game 7 of the World Series on Wednesday night. 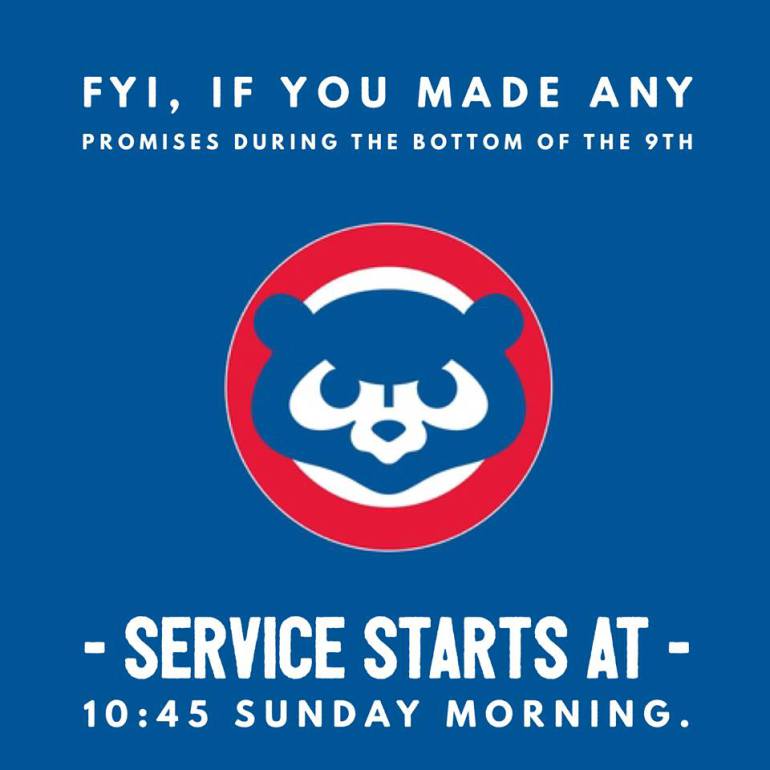 The photo is going viral, and was featured on the “Today” and in USA Today on Friday morning.

The Cubs beat the Cleveland Indians, 8-7, on Wednesday night in 10 innings to win the World Series in seven games.

The win capped a rally from a three-games-to-one deficit and secured the Cubs their first championship in 108 years, the longest drought in North American professional sports history.

Thousands of fans turned out Friday for a victory parade and rally in Chicago.

DAUPHIN, Pa. (WJW) -- An entire town in Pennsylvania banded together to thank their beloved UPS driver, who sometimes worked 70 hours per week to make sure they all had their packages after the pandemic hit.

It was all a huge surprise for Chad Turns, and the touching moment was caught on video.

DENVER (KDVR) -- Finding a water closet on the 16th Street Mall is about to become a much simpler venture this spring when relief is delivered in the form of a state-of-the-art restroom.

Half a decade ago, calls for accessible restroom facilities in the downtown Denver area led to the launch of a pilot program aimed at installing these facilities across the city.

Photos: Bighorn sheep enjoy the snow at Garden of the Gods

COLORADO SPRINGS, Colo. -- The Rampart Range herd of bighorn sheep has been active at Garden of the Gods recently, and Thursday's snow provided a particularly spectacular backdrop for these majestic animals.

‘Satan’ says he was flirting, trying to get a date on Boston subway