EVERGREEN, Colo. -- Threats have been made against the Evergreen couple accused of starving their six-year-old daughter, law enforcement sources told FOX31 Denver.

Their daughter weighed just 25 pounds when the couple brought her to Children’s Hospital on June 10.

The parents admitted taking their daughter out of kindergarten and placing locks on their refrigerator to keep their oldest child from eating.

Neighbors have the same questions investigators did, why?

The couple’s three children, were placed in protective custody.

Investigators said only the oldest, a 6-year old showed signs of abuse.  She had the weight of a 2-year old, 25-pounds, skin pockmarked with dents from malnutrition.

“You just can't explain things like that people do things that are beyond any kind of logical explanation,” Bristow said.

Jason and Katie Barton were released from jail after each posted a $25,000 bond.

Their address has been redacted from the arrest affidavit for their own protection.

Prosecutors don’t want an outraged community knowing exactly where the couple lives in the mountain town of Evergreen.

“It's not unusual in a case that has facts that really grabs the public's attention for my office to receive communication from the public expressing their interest in the case and expressing opinions as to what should happen  and that  has happened in this case,” said Peter Weir, District Attorney for the First judicial district.

Detectives said the parents admit keeping locks on their refrigerator and pantry to keep their six-year-old from eating.

“I know she's significantly malnourished, I think the affidavit indicates that she has the development of a 2-year-old,” DA Weir said.

On a Facebook post from 2013, a friend of Katie’s writes about the six-year-old, “She is so tiny.  Feed her a cheeseburger. Lol.” 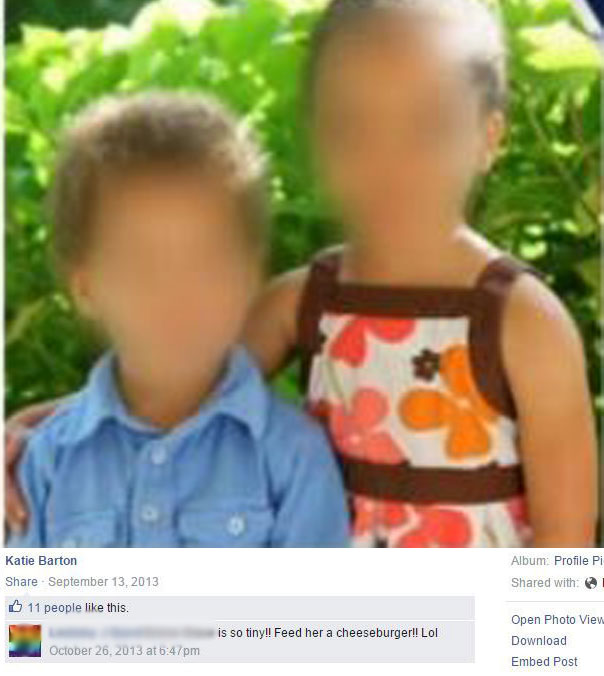 But, it’s no joke anymore.  Doctors compared the girl to a concentration camp victim, a girl who told investigators she was forced to run laps in her driveway for taking food without permission.

The girl “was not allowed to have any birthday cake while the other children were allowed to eat cake,” according to the affidavit.

The report goes on to state medical staff observing the mom, “Katie was drinking chocolate milk in front of the 6-year old and apparently ‘taunted’ her by showing her the full carton of milk and then drinking it.”

“I’m glad that somebody found out. That's the main thing that this little girl can now be helped,” Bristow said.

The affidavit also states the girl was forced to sleep in a sleeping bag in her parent’s bathroom.  At one point her father admitted to detectives that he and his wife were quote “jackasses” for denying their daughter food.

The couple is due back in court on July 21.

WASHINGTON (AP) — The captain of a U.S. Navy aircraft carrier facing a growing outbreak of the coronavirus on his ship was fired by Navy leaders who said he created a panic by sending his memo pleading for help to too many people.

Acting Navy Secretary Thomas Modly said the ship's commander, Capt. Brett Crozier, “demonstrated extremely poor judgment” in the middle of a crisis. He said the captain copied too many people on the memo, which was leaked to a California newspaper and quickly spread to many news outlets.