FREDERICK, Colo. — K-9 experts say a cadaver dog may have provided detectives their most important clue in the Chris Watts homicide investigation. Investigators in Frederick, Colorado aren’t saying how they got Chris Watts to confess Wednesday but Weld County prosecutors have revealed Watts’ wife Shanann and two daughters were killed inside their home. 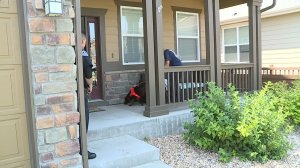 On Tuesday morning, K-9 search teams were seen going in and out of the Watts home while Chris Watts was providing interviews to the media.

Bret Hribar operates Reliance International Protection, which trains K-9s  for law enforcement nationwide. He told FOX31 it’s possible the police dogs detected the smell of the deceased before Watts ever confessed, “I could easily see that, law enforcement has gotten so good at working with the animals.”

Hribar said humans give off certain smells the moment they die so a cadaver dog can tell the difference between a person’s live scent and their dead scent even in a house where the body has already been removed.

“A dead body gives up different smells and they are so minute, we as human beings could never dream of detecting the difference but a dog can,” said Hribar.

If a K-9 alerted its handler to the scent of death, Hribar said it might have been easier for detectives to convince Watts to confess.

It’s not known if that happened in this case because the arrest affidavit remains sealed and even when it’s unsealed, those details might not be released.

ARVADA, Colo. (KDVR) -- Erin Hensley is recovering from a double mastectomy and five months of chemotherapy after a breast cancer diagnosis in late 2020.

"Luckily, I was stage one," Hensley said.

IDAHO SPRINGS, Colo. (KDVR) — A former Idaho Springs Police officer, fired after he used a Taser on an innocent 75-year-old, is expected to accept a plea deal that the victim's family finds insulting.

DENVER (KDVR) -- The new Colorado economy will take some time to get back to normal.

In the short term, Colorado's economy is on the upswing and will stay that way for the foreseeable future.

Denver ranks 5th among ‘most sinful’ cities in America

Tips for singles during the holidays

Colorado-based organization that supports families who are “There With Care”