DENVER — Relax. The Purge is not coming to a city near you.

In the past week, images circulating on social media warned that a real-life version of the mediocre but popular horror series was set to take place in multiple cities this month, including some in Colorado.

But the images are all part of a series of sloppy internet hoaxes, likely inspired by a Kentucky high school student who has since apologized for the campaign.

“I didn’t think it would really get that serious,” the student, unnamed because he is a minor, told WAVE-TV. “It was wrong for me to do that.”

In “The Purge” films, America is ruled by a totalitarian government that rolls back all laws for one night each year. The streets are overrun by masked gangs who murder, rape and rob while families barricade themselves indoors.

The key to the fictional Purge is that the government suspends all police and emergency services for the duration of the macabre holiday. But in the real world, where chaotic public assemblies are met with paramilitary force and police show no signs of taking a day off, it’s hard to imagine that would-be Purgers would get very far.

Purge threats in Kentucky, Ohio, Florida, Michigan and Illinois were all found to be unsubstantiated.

Still, some Coloradans were concerned to see the masked villains from the films popping up in their social media feeds, with some contacting us about it.

Soo has anybody heard bout this Colorado Purge? September 6?? 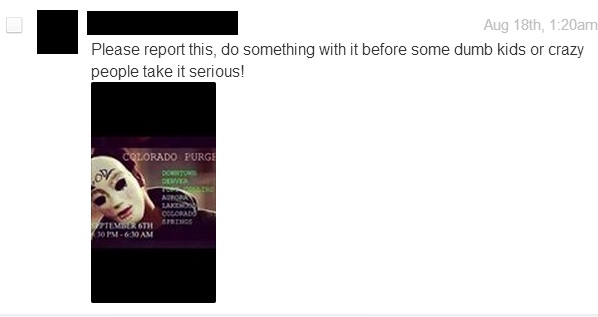 A lieutenant with Colorado Springs Police Department told KRDO he was aware of the photo. He said he wasn’t worried about it, but he did alert his officers.

The general law enforcement stance around the country seems to be that they take all potential threats seriously, but there is no reason to expect a Purge anytime soon.