DENVER — The Texas college baseball coach terminated for comments he made to a Colorado high school athlete broke his silence and he isn’t apologizing for the recruitment rejection email that was sent.

The message was sent to Gavin Bell February 20. 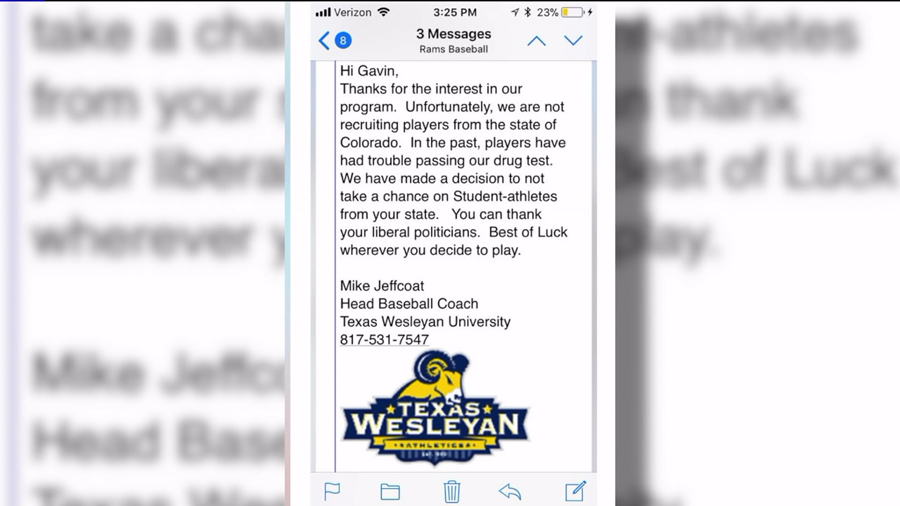 The fired coach told our sister station in Dallas, it was a factor of things that led to what he wrote in the email, but Mike Jeffcoat knows he could have handled the situation better.

“It’s been hectic, it’s been stressful. it’s an unfortunate situation. I’m just dealing with it the best I can,” he said.

The university said it fired Jeffcoat for NAIA violations and because of the comments made in the email.

“It happened just kind of a spur of the moment thing. I just remember I was rushing out of my office and just responded the way I did. Frustration from losing players in the past because of the drug test,” Jeffcoat said.

Despite the strong words in the message, he said he should not have lost his job, adding that he was only exercising his right to free speech.

DENVER (KDVR) -- The omicron variant seems to have reached its peak in the state, according to Dr. Jon Samet, the dean of the Colorado School of Public Health.

Samet's team will publish a new model this week, but he thinks barring a new and nasty variant, spring is looking better for the state.

What is ‘stealth omicron’?

(NEXSTAR) — As hospitals nationwide continue struggling to operate during the omicron surge, a variant inside the variant is now raising concerns. Monday, Newsweek reported at least 92 cases of the BA. 2 omicron subvariant have been detected in over 20 U.S. states, including California and Texas.

The omicron variant is made up of three main substrains, BAs 1-3, and until Dec. 23 the World Health Organization said 99% of cases sequenced were BA. 1, Fortune reports. Last week, the subvariant overtook BA. 1 as the dominant substrain in Denmark in just two weeks. BA. 2 went from accounting for 20% of cases to accounting for 45%. Similar increases are now being seen in the U.K. and elsewhere.

CLEVELAND (WJW) — The U.S. Department of Labor’s Occupational Safety and Health Administration is officially ending its emergency temporary standard (ETS) that required COVID vaccinations or weekly tests in workplaces with 100 or more employees.

Biden task force promises to crack down on human trafficking

Like U.S., Colorado has gotten more Republican in the last year