BRIGHTON, Colo. — A Brighton mother says her family is facing hundreds of thousands of dollars in medical bills after her son was hit and dragged by a man who was under the influence of drugs.

The driver now facing four charges, including vehicular assault, but has since posted bond.

On Sept. 27, 18-year-old Adam Butler suffered massive internal injuries as well as a traumatic brain injury from the accident.

“His face when we saw him was unrecognizable. There was so much blood,” said Butler’s mother, Audra.

Her son, 18-year-old Adam Butler was walking to his dad’s house to drop off a birthday gift when 30-year-old Adyan Chinn veered off of 11th Avenue onto the sidewalk, hitting Bulter, and eventually dragging him.

Butler is currently in the Trauma ICU at UCHealth suffering not only a traumatic brain injury and bleeding but numerous broken bones in his body and face, as well as a deflated lung.

“It’s just hard to fathom. How can you be living your life as a sweet 18-year-old one minute, and be fighting to take your breath the next?”

The family said it will be weeks before they know the extent of the damage and they’re furious that Chinn bonded out of jail.  “He’s sleeping.  He’s eating.  He’s walking around.  My son can’t do any of those things.  It’s not fair,” said Butler. 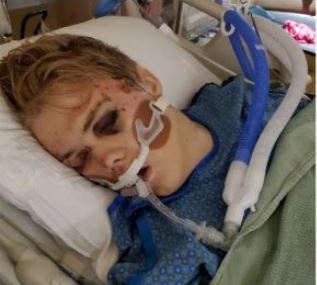 Audra, however, says their sole concern is helping Adam recover. That feat comes with a huge medical bill because Chinn was uninsured.

“We’re already in the hundreds of thousands of dollars, and this is day nine. We have extensive in-house rehab. We have brain trauma therapy ahead. He has to learn to walk again.”

The Brighton community is rallying behind the 18-year-old, starting a GoFundMe for medical costs, and getting ready to host a fundraiser, next month on Adam’s birthday.

That fundraiser will take place at Blackjack’s Pizza in Brighton on Nov. 16.

It’s called “Dough for Butler,” and all proceeds from sales between 4 and 8 p.m. will go toward his medical costs.

How you can get your Amazon driver $5

How you can get your Amazon driver $5

Celine Dion has stiff-person syndrome: What is it?

Wall Street points higher ahead of jobs and inflation …