The world of smartphone innovation has slowed down over the past few years.  After all, there are only so many new features you can cram into a phone.  Right?  Well, I gotta hand it to Motorola, they have created a new smartphone that sticks out from the crowd for its' size and modular add-ons.  I had a few days to test out the new Moto Z Droid on Verizon Wireless.

Thin.  Insanely thin!  That's how I would describe the Z.  Until you hold it, you can't even imagine how thin they made this thing.  They didn't skimp on the specs either.  It has the latest quad-core snapdragon processor, 32GB of storage, a 5.5" screen, a fingerprint scanner and a 30-hour battery!  The camera is 13MP.  It's not the highest Megapixel camera on the market but it takes great pictures and video.  I personally don't think we need 21 Megapixels.  I'll take quality over quantity any day of the week. 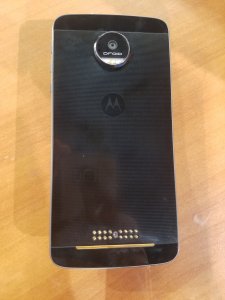 The Z does have quick charging so you can juice up the battery in a matter of minutes, not hours.  If I'm being picky, I wish it had wireless charging.  Previous Moto Droids have included wireless charging and it's a feature I have learned to love.  Perhaps I'm the only one?  None the less, I miss it in the Z.

On the back there is a camera hump that sticks out and metal contacts toward the bottom.  Those contacts are for the modular add-ons called Moto Mods. 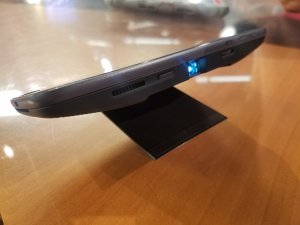 Motorola jumping into the world of modular smartphone add-ons.  Moto Mods magnetically attacked to the back of the Moto Z.  You'll never be nervous that a Mod is going to pop off, the magnetic connection is super strong.  Right now there are only a few Mods available.  I tested out the Moto Insta-Share Projector ($300) and the JBL SoundBoost Speaker ($80).  Both world exactly as promised.  Once you attach the Mod the phone instantly recognizes it.  The project was bright enough for a dark room but hard to use in a room with regular lighting.  The SoundBoost instantly sends audio from the phone through the JBL speakers.  It sounds good and gets pretty loud.  There are much better bluetooth speakers available (Ultimate Ears are my favorite) but for $80 and the connivence of attaching to the back of your phone, I like this Moto Mod.

In the end, Moto Mods are cool but what's really cool is where this could go next.  I like the speaker and projector but I can't wait to see what they'll do next.

The camera bump stinks.  It sticks out WAY too far and I'm worried the lens will get scratched too easily since it sits flat on the table when you set the phone down.   They do give you one free Moto Mod back when you buy the phone. The included back is wood but you can pick leather or fabric backs too.  They connect via the Moto Mod magnetic connection and don't do anything except add a fun color or texture to the back of your phone.  This makes the phone a bit thicker, thick enough to get rid of the camera bump. 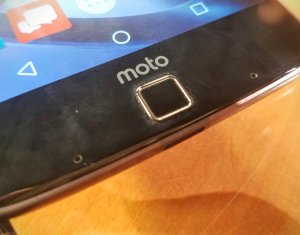 The Moto Z Droid is $624 from Verizon Wireless.

New to Zoom? Here are tips and tricks to make you a pro user

(KTLA) -- Zoom, Zoom, Zoom! The video chat software Zoom was started nearly a decade ago, but in the past few weeks, it has become the go-to app to keep us connected while we stay at home.

It seems as though everyone is using it.

“The new features in the myColorado mobile app support the practice of social distancing by providing easy access to state services from a smartphone, which is critical as we get through the COVID-19 pandemic together,” said Theresa Szczurek, Ph.D., the executive director and chief of Colorado's Office of Information Technolgy (OIT).

Realtors turn to technology during pandemic

DENVER (KDVR) — The real estate industry is now turning to technology to help them adapt during the coronavirus pandemic.

“With the power of technology, we are able to still conduct business," said Delroy Gill with LIV Sotheby’s International Realty.