Google typically builds the Android software and leaves the actual smartphones and tablets to other companies.  The exception is the Nexus line.  Google works with various manufacturers to build their own line of phones and tablets every year.  The HTC-built Google Nexus 9 is the newest tablet in the Nexus line and I had a chance to test it out before it officially went on sale this week. 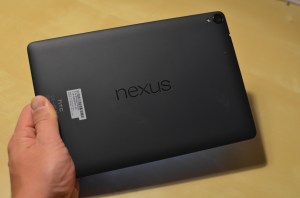 In terms of form factor, the Nexus 9 is exactly what we expect from a tablet in 2014.  It's a thin slab with glass on the front covering the 8.9" screen and plastic on the back.  The edges are made of brushed metal that give the Nexus 9 a solid feeling despite the plastic back.  The screen is great although I'm not sure why they went with a 4:3 screen.  Everything is 16:9 and the 4:3 screen feels antiquated to me.   With a 2048 x 1536 resolution it looks crisp.  It has the same resolution as the iPad mini 3 but with an extra inch in screen size.

The Nvidia Tegra processor inside keeps this thing snappy.  In my testing apps loaded up quickly and internet browsing was fast.

Some people might not like the plastic back compared to the metal on the back of the iPad.  Personally, I like the soft plastic.  It doesn't feel as solid as the metal but I think it works well with the brushed metal edges.

Another highlight of the Nexus 9 is that it's running the newest version of Android, Lollipop.  You'll soon see Android Lollipop 5.0 on many more tablets but for now, the Nexus 9 is among only a few running the new version.  Google redesigned Android and changed a few key things.  Notifications are greatly improved, multitasking is easier with the new carousel of apps and the look is just downright slick.

I'm just scratching the surface of new Lollipop features.  This is a major Android upgrade and I think most Android users will be very happy with the countless tweaks and updates.  Nexus 9 is created by Google so it gets to be on the cutting edge software-wise.  Expect to see other Android tablets updated with Android Lollipop soon. 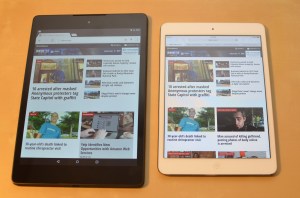 I hate comparing every tablet to an iPad but let's compare this to the iPad.  The screen is an inch bigger than the iPad mini 3 but the 16GB model is the same price as the 16GB Nexus 9.  So technically you get more for the same amount of money.  None the less, iOS people will buy an iPad regardless.  So, for that reason, let's stop comparing this to the iPad.

In and of itself the Nexus 9 is one of the best "smaller than 10 inch" tablets on the market.  It looks great, feels great in your hand and the processor keeps it humming right along.  The screen is clear and bright and the newest version of Android is the best yet.

Bluetooth headphones seem to be a dime a dozen these days. There are plenty of $20 or less options at your local big box store. Problem is, most of them stink. Sure, they're fine for the kids to use (and likely break) around the house but if you're looking for something that's actually good, keep looking. I had a chance to test out the Aria Me bluetooth headphones that not only comes with a charging stand but also promises to tailor the sound to your ears. Here's my take...

There are 3 pieces to the Aria Me headphones. You get the headphones, a removable microphone and the charging stand. The headphones themselves feel sturdy. These are true "cans." Big headphones that cover your entire ear. The cushions are big, soft and comfortable. Even after wearing these for a while they didn't feel uncomfortable at all. This is super important if you plan on wearing these for extended periods of time while working from home.

The list of companies selling smartwatches is long. There are A LOT of options these days. The problem is, when you get to the $200 price point, you have to be careful. There are some bad budget options. There are also some amazing options. The Garmin Venu Sq is one of those. Starting at $200 it doesn't feel like a budget smartwatch. I spent the past week wearing it and testing it out.

The Garmin Venu Sq has a very simple design. It has a square screen (hence the Sq in the name) and a rubber watch band. The color touchscreen is 240x240 pixels. It looks good. There are watches with larger screens but for the price, this is a great screen. The watch I tested was slate aluminum but it is available in various colors. The face of the watch is scratch resistant Gorilla glass. On the back of the watch you'll find various sensors and a charging port.

Add yet another phone to the Samsung Galaxy line-up. This one doesn't fall into the top of the line category or the budget category. It's promises to be the goldilocks of Galaxy phones, right in the middle. Is it "just right" for your needs? I took the new Galaxy S20 Fan Edition for a test.

Samsung says after the release of the S20 5G they asked consumers what they liked the most about that phone. The company says they used those responses to shape the S20 FE into a phone that costs less but maintains the most important features that "fans" want. Let's start with the hardware.

Reverse mortgage: Who is it right for?

Watch: Car fire on I-25 in Castle Rock, traffic at stand still

‘We are an optimistic bunch’; Ski resorts push forward with plans to reopen

‘This could force us into another Stay at Home’; COVID-19 situation in Denver is looking ‘really bad’

Warmer with sunshine for Wednesday; Dry for Halloween