The smartphone world may be ruled by Apple and Samsung but that is not stopping Google from working it’s way in.  The Google Pixel line of phones has become a serious competitor and only gets better with each new model released since first introduced in 2016.  The newest, the Google Pixel 4, is the best yet.  I took it for a test.

Like so many new smartphones these days, the Pixel 4 looks like… wait for it… a phone.  There’s nothing dramatic or noteworthy here.  It has a screen on the front, cameras on the back, a power button on the right and a charging port on the bottom.  As they say, it’s what’s inside that really counts.  Not only does Google pack in a wicked fast Snapdragon processor, a 16MP and 12MP camera on the back, wireless charging and most of the other tech specs you’d expect on a 2019 phone, Google also brings some impressive software features to the table. 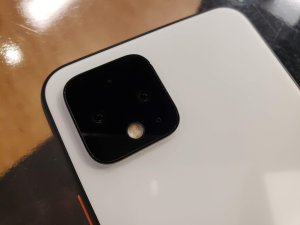 Our phones are our cameras and the Pixel 4 shines when it comes to snapping pics.  Google included a 16MP and a 12MP camera on the back.  One camera grabs wide angle and low-light pictures while the other gives you the ability to zoom and still get clear shots.  Google’s artificial intelligence makes those zoomed in pictures look better than other phones.  Google smarts also create a feature called “night sight” that take some of the most amazing pictures in dark conditions that you’ve ever seen on a smartphone.  It’s downright impressive.  It took what I thought were impossible conditions and snapped good photos.

If you are looking for a smartphone with the best camera, the Pixel 4 should be on your list.  Yes, the iPhone 11 and Samsung Galaxy S10 both have great cameras as well.  The only thing missing on the Pixel 4 is an ultra wide angle camera.  If this a “must have” then you may want to look elsewhere.  Otherwise, the Pixel 4 nails it for dark photos and zooming in.

As I mentioned earlier, Google brings software magic to the table.  The face unlock is better and faster than ever before.  In my testing it was MUCH faster than what I’ve tested on Samsung phones and on par with iPhone face detection.  Google included some fun motion gestures that allow you to wave your hand over the phone to silence alarms or skip a song.  I’m not sure I’d actually use this often but it’s pretty cool to show your friends.  Although not specific to the Pixel 4 but Google’s smart assistant is better than ever.  Ask Google to share what’s on your screen with a friend and it’ll text a screenshot.   You can save reminders, set appointments and more using your voice.  I can’t even begin to cover all of the new features in Google Assistant but it’s among the best when it comes to smart voice assistants. 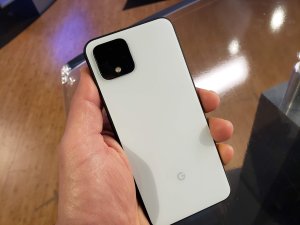 One of the biggest criticisms of the Pixel 4 has been the size of the battery.  The battery is rated at 2800mAh which is smaller than the iPhone 11 at 3110mAh and the Samsung Galaxy S10 at 3400mAh.  While these numbers obviously tell part of the story I think real world use tells a different story.  Sure, the battery may be smaller but in my testing the Pixel 4 did a solid job getting me through a normal day.  It’ll take weeks or months to really see how the battery holds up (I didn’t have that much time before posting this review).

The Google Pixel 4 is one of the best smartphones you can buy right now.  Period.  It’s camera and AI camera features take amazing pictures and video.  The software feels tuned in and the phone itself gets out of the way.  There’s no flashy design or features, it’s just a phone that does a great job of being of the best on the market.  While the lack of an ultra wide angle camera and a larger battery may concern some I’m not convinced either are a deal breaker.  The $800 price tag makes it one of the more affordable phones you can guy in this class.

The Google Pixel 4 is available from phone carriers or directly from Google on their website.

(CNN) -- A glove that translates sign language into speech in real time has been developed by scientists -- potentially allowing deaf people to communicate directly with anyone, without the need for a translator.

The wearable device contains sensors that run along the four fingers and thumb to identify each word, phrase or letter as it is made in American Sign Language.

Bar Rescue’s Jon Taffer: ‘I’m not certain a lot of bars will survive this’

Hersheypark denies entry to boy with autism because of mask rules

Miami is now the coronavirus epicenter as cases surge, one expert says

Charlie Blackmon returns to Rockies after recovering from COVID-19

First federal execution in nearly 2 decades carried out in Indiana

DPS responds to board member concerns over in-person learning

Community comes together to discuss solutions to youth violence

Hersheypark denies entry to boy with autism because of mask rules

Miami is now the coronavirus epicenter as cases surge, one expert says

Community comes together to discuss solutions to youth violence