CLEVELAND, Ohio — A trove of Air Force reports on UFOs has made it online, thanks to years of work by an amateur investigator.

Blue Book was shut down in 1985, with investigators concluding that “there has been no evidence indicating that sightings categorized as ‘unidentified’ are extraterrestrial vehicles.” Some believers, of course, found that hard to believe.

The UFO files on The Black Vault website also include Blue Book’s 1940s-era predecessors, Project Sign and Project Grudge, according to the Military Times.

According to government records, the Air Force recorded 12,618 sightings of strange phenomena between 1947 and 1969 — 701 of which remain “unidentified.”

Most of the pages are scans of original documents, including photos and reports written in witnesses’ own handwriting. A large percentage appear to have been filed by military personnel. While investigators do dismiss many of the cases, a surprising number remain open.

Included in The Black Vault is an alleged 1950 incident at Holloman Air Force Base in Alamogordo, New Mexico. There, an Air Force Office of Special Investigations agent reported “a star-like craft that shifted from a bright white color to red and green as it moved erratically in several directions,” the Military Times reported.

The term “Colorado” appears some 600 times in the files. Numerous reports out of Denver and Colorado Springs are documented, as well as dozens of others throughout the state. 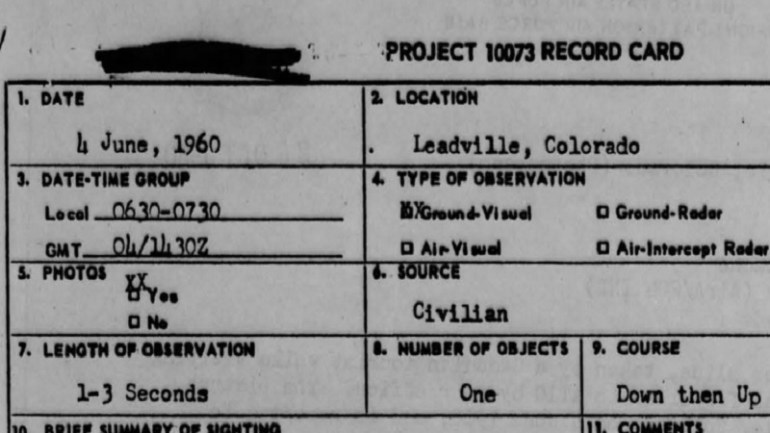 What’s missing from the government files? Any mention of a 1947 aircraft crash outside Roswell, N.M.

The National Archives maintains it “has been unable to locate any documentation among the Project BLUE BOOK records which discuss a 1947 incident in Roswell, New Mexico,” according to the newspaper.

The files can all be read at The Black Vault — but the website has been plagued with technical problems all week.

Could it be a conspiracy?