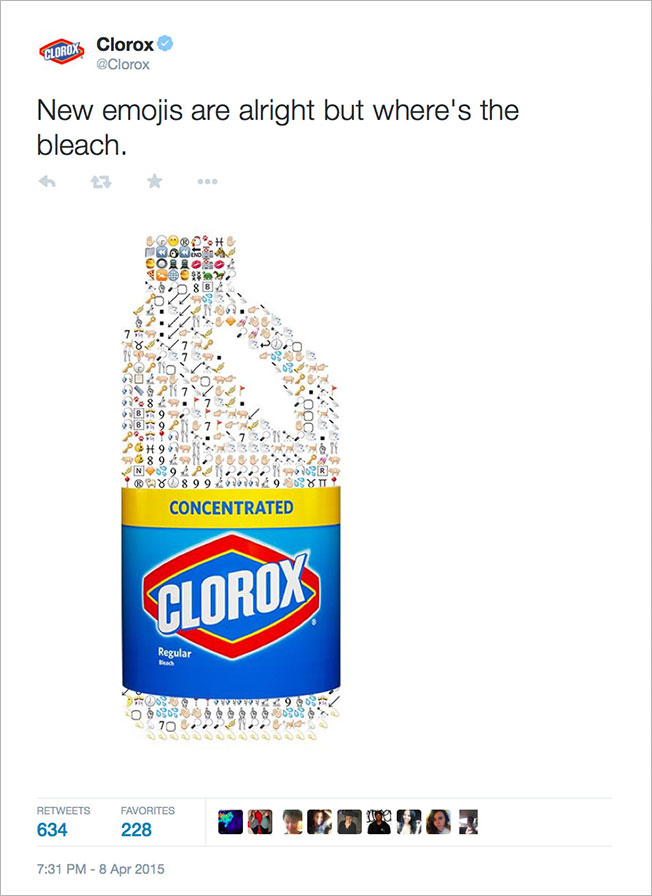 NEW YORK — Clorox has apologized for a seemingly harmless tweet about emojis that sparked outrage on Twitter.

The tweet, which Clorox since deleted, showed a Clorox bottle made up of the new emojis released by Apple as part of this week’s iOS 8.3 update. Clorox tweeted, “New emojis are alright but where’s the bleach.”

Apple’s new iOS 8.3 release consists of 300 new emojis, including kissing lips, googly eyes and a smiling poop (we wish we were making that up). But they also include racially diverse emojis, including cartoon faces with brown and black skin.

In its tweet, Clorox seemed to be commenting on why bleach wasn’t included among the hundreds of other household items that Apple had added to its list of emojis. But on social media, offense was taken.

“You need to clean up your PR person. Put some bleach on your distasteful marketing ideas,” tweeted @DriNicole. “Black emojis were added today. Saying this implies you’d rather the emojis be only white, by adding bleach.”

After taking down the tweet, Clorox followed up with an apology: “Wish we could bleach away our last tweet. Didn’t mean to offend – it was meant to be about all the [toilet, bathtub and red wine] emojis that could use a clean up.”

A spokeswoman from Clorox did not immediately respond to a request for comment.

Taco Bell launched a similar — but far less controversial — campaign earlier this year in an attempt to rally support for a taco emoji.

In a looming update to the emoji system (for non-Apple devices), a non-profit organization called the Unicode Consortium that regulates emojis among other computer text, is considering 37 candidates for new emoticons could be added as part of a code update scheduled for June.

The finalists include racially diverse emoji faces, a zipper-mouth face, prayer beads, a cricket bat and a taco.

TCL.  A brand name you may not know for their phones but you might recognize for their TVs.  Thing is, TCL has been making smartphones behind the scenes for years.  They're responsible for the latest well reviewed (but not successful commercial) Android Blackberry phones.  Now, they're ready to kick the other brands to the curb and launch 2 new smartphones on their terms... with their name on the back.  I…