Samsung is back with the newest flagship Note 10 smartphone.  This year, for the first time, they’re offering 2 different sizes of the Note 10.  The massive Note 10+ has a 6.8″ screen while the smaller Note 10 has a 6.3″ screen.  Both pack that classic Note stylus that people have grown to love.  New features and a better camera are the big promises of the new Note 10 line, so I took it for a test.

I won’t belabor the basic features of the Note 10.  Of course it has the latest Snapdragon processor, beautiful screens and is slim and sleek as you would expect a modern day smartphone from Samsung to be.  Instead I want to focus on the new features that stood out in my 2 weeks with the Note 10. 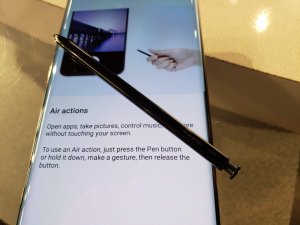 For many of us, the stylus seems like a thing of the past.  Remember the Palm Pilot?  Remember those early Windows Mobile devices?  They all had a plastic stylus that slide from the bottom.  Why would I need one now when my finger does the job on most smartphones?  Samsung continues to prove why the stylus is not dead yet!

Last year Samsung turned the plastic stylus into a bluetooth tool.  They added a button that can be used to control basic functions like music playback on the Note.  The stylus charges when it’s docked inside the Note.  This year, they took that a step further.  Motion sensors inside the stylus (Samsung calls it the S Pen) now let you swipe the pen in the air to navigate the phone wirelessly.  It’s like using a magic wand!  It works.  It’s cool.  Problem is, I don’t see myself ever using this in a real world situation.  I like the S Pen.  I like using it to write on the screen!  I like that you can use the button as a remote control for watching video or listening to music.  I’m just not convinced that swiping it around in the air is something that will actually prove to be useful.  None the less, the S Pen is better than it’s ever been and for stylus-lovers it’s as good as it gets. 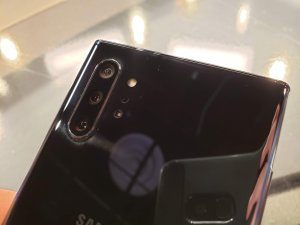 I know this is a hard distinction to make, especially since every phone has an awesome camera these days.  The iPhone, the Google Pixel, the Samsung Galaxy S10… they’re all great at taking pics and video.  The Note 10+ is easily one of, if not the best camera smartphone.  The Note 10+ has 3 cameras on the back for taking wide angle shots, standard shots and zoom shots.  It also has a depth camera that allows for cool effects like background blur in video as well as photos.  Check out some of the awesome pics I snapped around the Fox31 studios with the Note 10+.

This is the first time Samsung has released a smaller Note, simply called the Note 10.  I love the smaller size because I’m simply not a big-phone person.  Problem is, you’ll have to make some sacrifices.  Obviously the screen is smaller but it also has a lower pixel density.  You get less RAM, 8GB in the Note 10 compared to 12GB in the Note 10+.  There is also no microSD card slot in the Note 10 so you can’t add additional storage.  This is a bummer since that’s been a staple and bragging point for most Samsung flagship phones for years.  Both models have 3 cameras on the back but the Note 10+ has an additional 4th camera used as a DepthVision sensor.   This adds those cool background blur features.

Rockin’ on the at&t network

The Note 10+ I tested is on the at&t network and in my testing the network didn’t skip a beat.  Speed tests at the Fox31 studios (Speer & 5th in Denver) returned awesome results.  Download speeds clocked above 100Mbps during most of my testing.

The Note line of smartphones hangs its’ hat on the stylus (S Pen) and the newest model is no exception.  Problem is, I’m not sure how big that niche of stylus users really is.  I love that Samsung is working to widen the net with a smaller-screened model but I don’t think the $100 price difference is worth the sacrifices you have to make.

With that said, if you’re looking for a big screen phone and you love the idea of a connected stylus there is no better choice than the Samsung Galaxy Note 10.  The cameras are awesome, the stylus is better than ever and the phone itself backs the expected Samsung punch.

Colorado Parks and Wildlife biologist Lance Carpenter and wildlife pathologist Karen Fox are studying the disease, hoping to find the cause and prevent it from spreading.