Smart watches have come a long way over the past few years.  Android watches have gotten better and the Apple Watch has all but taken over the category.  You don’t have to spend $300 to get a good smart watch.  In fact, one of the best, can be had for $200 and comes from a fitness tracking company.  I took the new FitBit Versa 2 for a test. 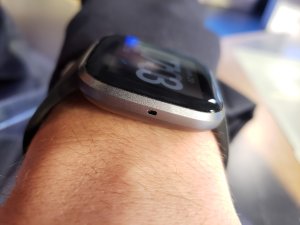 Truth is, the Versa 2 looks a lot like the Apple Watch.  Most people will probably think it is an Apple Watch.  This isn't a bad thing.  The design is similar to the original Versa watch that I reviewed in 2018. The button on the left side of the watch can wake the watch with a single press or summon Alexa if you hold it down.  (more on this feature down below)  The touchscreen is used for the majority of navigating the on-screen menus.  On the backside you'll find the 4 metal contacts for charging the Versa and the heart rate sensor.  All of this packed into a nice compact watch that doesn't stick out like a giant geeky smart watch.  It's sleek and slick.  I wore it for a week without anyone thinking twice about it.

Simple.  Super simple.  The Versa 2 connects to your Android or iPhone via bluetooth using the FitBit app.  It took me about a minute to detect the watch on my phone and the rest was automatic.  The menus guide you through setup and syncing.  It's as easy as you'd expect with the Fitbit app that many of us have used before on other Fitbit devices.

This is Fitbit's jam so as you might imagine the fitness tracking feature set is where the Versa 2 excels.  You can quickly select an exercise from the menu on the watch to start tracking your run, hike, walk, bike, yoga, golf, etc.  There are a ton of options.  It can also track your swimming because the watch is waterproof.  The heart rate monitor keeps an eye on your heat beat 24/7 so even if you don't start an exercise it still tracks your activity.  You can see a chart from my jog on a treadmill to the right.  Something to keep in mind and one of my complaints is that there is no GPS chip in the Versa 2.  This means that the only way for it to truly track an outdoor jog is for you to have your smartphone with you.  A GPS chip would kill the battery but it's hard to call this a true fitness tracking watch when it doesn't have GPS.  Personally, I'll take the battery life over the GPS but I'm also not an avid runner.  Some may disagree.  Regardless, the fitness tracking features, heart rate monitor and Fitbit app on your phone are among the best you'll find.

Aside from telling the time and tracking your activity, getting your phone notifications on your wrist is also a pretty important task of any smartwatch.  The original Versa did a good job but since there was no microphone you couldn't actually respond to a text message aside from a list of canned replies.  It was one of my biggest complaints about the original Versa.  Fitbit fixed this!  A microphone in the Versa 2 makes it easy to send a custom text message reply.  What it won't do is let you start a conversation.  Fitbit needs to fix this.  There's no reason I shouldn't be able to tap a contact and start a new conversation on the watch.  Even using the built-in Alexa feature, it tells me it doesn't support that feature when I ask to send a text.  Firmware updates FTW!  (I'll be waiting)  That aside, I do love seeing my incoming messages and e-mails on my wrist throughout the day.

Alexa on my wrist?

The biggest feature added to the Versa 2 is the ability to summon Alexa on the watch.  Holding down the side button brings up the iconic Alexa logo and awaits your question or command.  It's cool.  It's fun.  It's a feature you probably won't actually use very often.  I was able to ask Alexa the weather, set a timer or even control smart lights and the Nest thermostat at my home.  Alexa on the Versa 2 doesn't support the things I would really find useful like sending a text message or e-mail.  Hopefully that comes with a future software update.  Also keep in mind that Google's parent company, Alphabet, agreed to purchase Fitbit in 2020 so don't be surprised if the Alexa feature disappears from this watch in the future.  Perhaps it'll be replaced by the Google Assistant?

The smart watch market is getting more and more crowded by the day.  Many of them perform just like the others but the Fitbit Versa 2 stands out.  It's less expensive, packs a ton of features and has battery life that others don't.  Sure, it's not as powerful or flashy as the Apple Watch but when it comes down to it, it performs most of the same basic tasks that people love.  The Alexa features is fun for a few uses but I don't see myself using it often.  If Fitbit fixes a few of my complaints (starting a new text conversation and sending e-mails) with a software update the Versa 2 would be nearly perfect.   Hopefully that's in the pipeline.

AURORA, Colo. (KDVR) -- A mental health clinic for women that will be staffed entirely by women is set to open in Aurora Thursday.

The new unit at the HealthONE Behavioral Health and Wellness Center is located on the Medical Center of Aurora campus. It will be open 24/7, so women can call or just walk in.