If a cell phone company took every feature they had and threw it at a single smartphone… what would that look like?  It would probably look alot like the Galaxy Note20 Ultra 5G. I had the chance to take the new Note 20 for a test before it officially goes on sale on Friday August 21st.

All screen all the time!  The Note series has always offered a large phone.  Many called previous models a “phablet” because it seemed more like a cross between a tablet and a phone.  These days, most phones have pretty large screens so the idea of a 6″+ screen on a smartphone isn’t all that crazy.  The thing that the Note20 does amazingly well is that it has a large screen but it doesn’t feel huge.  In fact, in feels slick.  The glass on the front wraps around the sides and the back has a very nice opaque look to it.  The phone I was loaned to test out is the Mystic Bronze color but be warned that it appears to have a pinkish hue to it in my opinion.  It looks good but some might not call it bronze. 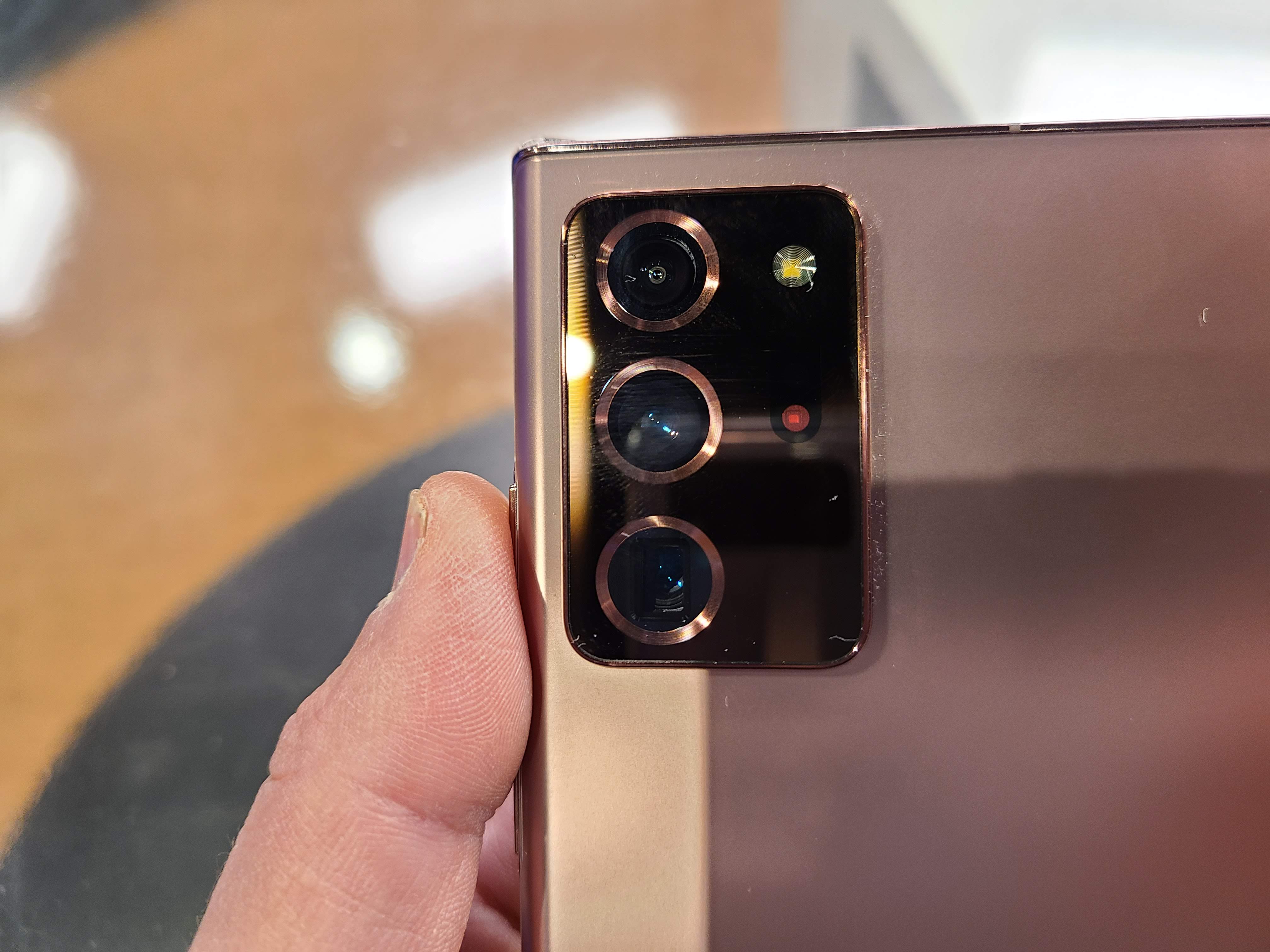 The problem with making a phone thin, and this phone is thin, is that some elements still need the extra thickness.  Case in point, the cameras on the Note20.  They protrude from the back of the Note20 in what feels like a large camera bump.  It’s certainly the largest camera bump I’ve ever seen on a phone.  If you’re going to slap a good thick protective case on this phone then it’ll likely sit nice and flush with the case but if you prefer your phone “naked” then it’ll be more noticeable.

So what about those cameras?

It’s not surprise that Samsung (and other cell phone companies) continues to throw all it has at making the cameras on their phones the best.  This, afterall, is easily the most important feature for many people.  The Note20 Ultra 5G doesn’t disappoint.  The bump may be annoying to some but camera quality makes up for it.  You get a 12MP ultra wide angle camera, a 12MP telephoto camera for zooming and a 108MP wide angle camera!  108MP is insane and used in a smart way so you can digitally zoom without your pictures looking like garbage.  The results are even more impressive than previous Samsung phones.  Check out the side by side below for a look at a wide angle picture next to a zoomed in photo from the same shooting location.

The Note 20 Ultra also adds a laser sensor for razor sharp focus and a 10MP front-facing camera for those all important selfies.

Packing in the power

The Note 20 screams.  The processor inside is the fastest Samsung has used yet on a Galaxy phone.  On top of that the screen on the Note20 is simply gorgeous.  The curved glass makes the phone feel seamless on the edges.  It also goes nearly to the top and bottom of the phone with just a slight black border.  If truly feels like an edge to edge screen and looks downright awesome.

Oh yeah, the other stuff

As part of the Note series we can’t forget the all-important S-Pen.  It pops out from the bottom and while it’s very similar to previous models with a button and touch sensitive tip, it’s more responsive than before.  The S-Pen has gotten so much better, it’s much more than just a stylus.  The screen recognizes the pen even before it touches the screen and the button can be used to remotely control things like taking a photo, pausing your music or advancing a slideshow.  It’s there if you want it but slides away into the bottom of the phone when you don’t.

Samsung has been flirting with the idea of connecting your phone to a full-sized display for years but it feels like they have finally decided to go big with that feature.  They call it Dex and it works really well.  Not only can you plug your Note 20 Ultra into a desktop or laptop for a full-screen experience but for the first time it works wirelessly.  You can browse the web, send text messages and run apps.  You can a use the phone while you do something totally different on the desktop.  Pretty impressive stuff.

At the end of the day, it’s still a big phone.  People who prefer something more pocketable may opt for the smaller S20.  The camera bump is big.  It was the first thing I noticed when I held the phone.  Good news is, most of us use a case so the bump will likely end up flush but it may be annoying to others.

(The Conversation) - If someone gets a headache or feels a bit under the weather after receiving a COVID-19 vaccine, it’s become common to hear them say something like “Oh, it just means my immune system is really working hard.” On the flip side, when people don’t notice any side effects, they sometimes worry the shot isn’t doing its job or their immune system isn’t reacting at all.

Is there any link between what you can notice after a vaccine and what’s happening on the cellular level inside your body? Robert Finberg is a physician who specializes in infectious diseases and immunology at the Medical School at the University of Massachusetts. He explains how this perception doesn’t match the reality of how vaccines work.

PALISADE, Colo. (KDVR) -- The Palisade Peach Festival will return in August after being canceled in 2020 due to the COVID-19 pandemic.

The event will take place August 19-21 in Palisade.

LAKEWOOD, Colo. (KDVR) -- A new feature has been added to Colorado’s AMBER Alert formatting, aimed at helping authorities respond to future kidnappings with the help of a better equipped community.

The Colorado Bureau of Investigation will be testing the updated Wireless Emergency Alert system at 11 a.m. today, sending out messages that include a new feature designed to give the public more access to details related to an ongoing crisis.