DENVER -- Authorities in Oregon have arrested two people who are accused of killing a man while stealing his car in Denver before committing a number of crimes in Wyoming, Utah and Oregon, according to FOX13 Salt Lake City.

Oregon State Police said Jose Lopez-Jovel, 31, and Matthew Anthony Fanelli, 30, were taken into custody in Roseburg, Oregon following a police pursuit Saturday. In a press release, OSP said law enforcement responded to a call about an attempted carjacking at a Red Robin. Lopez-Jovel and Fanelli were unable to steal the car. Fanelli fled in his original vehicle, but Lopez-Jovel was left behind and was arrested.

Fanelli then allegedly tried to elude police on Interstate 5.

"During the pursuit, the suspect shot a firearm several times and struck a commercial motor vehicle, a passenger car (striking the occupied child seat inside) and an Oregon State Police patrol car disabling it," OSP said.

Officers eventually lost sight of Fanelli's vehicle. He then tried to steal another vehicle from a couple who had just arrived home. OSP said he shot the man and assaulted the woman, but was unable to steal their car. The man who was shot was critically injured.

"Law enforcement again located the suspect vehicle and the driver again attempted to elude. The vehicle became disabled and the suspect was taken into custody," OSP said. 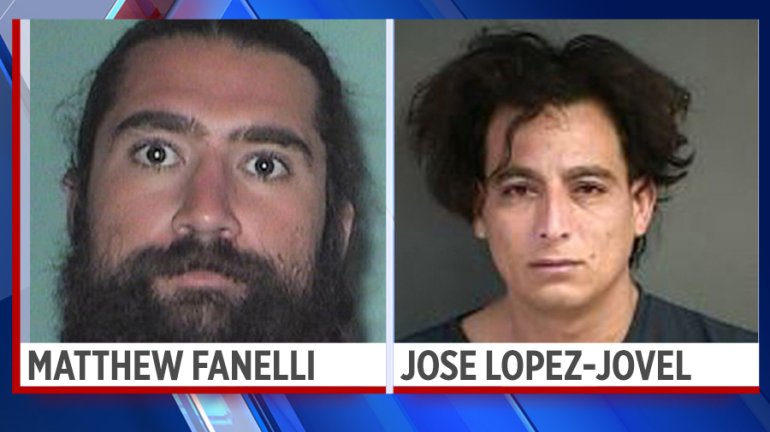 Additionally, the El Paso County Sheriff's Office said Sunday that on Friday morning, Fanelli shot at people outside a strip club in the Colorado Springs area. The sheriff's office said that at 12:12 a.m., dispatchers received a number of calls about a man shooting at the Déjà vu Showgirls building on B Street.

"Upon arrival, deputies learned that man became upset when asked to leave and began shooting at the manager and two bouncers when he left.  Nobody was injured, although several rounds struck the front of the building," the sheriff's office said.

Fanelli allegedly assaulted a female employee, who ran out of the building naked. Fanelli was with two people at the strip club -- a man and a woman -- who all fled the scene.

Fanelli, Lopez-Jovel and the woman then traveled to Denver, where they are accused of shooting and killing a man while stealing his Cadillac sedan in the Sloan's Lake area. That carjacking occurred about 2 a.m. Friday.

Authorities have not provided an update on the female who was traveling with the men.

Fanelli is from New Mexico. Lopez-Jovel is from El Salvador.

The FBI is assisting in the investigation.

Below is a timeline of events since Friday morning:

WASHINGTON (AP) — The captain of a U.S. Navy aircraft carrier facing a growing outbreak of the coronavirus on his ship was fired by Navy leaders who said he created a panic by sending his memo pleading for help to too many people.

Acting Navy Secretary Thomas Modly said the ship's commander, Capt. Brett Crozier, “demonstrated extremely poor judgment” in the middle of a crisis. He said the captain copied too many people on the memo, which was leaked to a California newspaper and quickly spread to many news outlets.

Drier with breaks of sunshine, warm weekend ahead