DENVER — The man suspected in a deadly shooting at an RTD light rail station had been in custody and was wanted for possible deportation, but was released from jail weeks before Tim Cruz was killed.

Now the Denver Sheriff Department is responding to questions about why they released the suspect, Ever Valles.

Immigration and Customs Enforcement was only given a 25-minute warning before Valles was released. A source said that was not enough time for ICE agents to get to the jail and take him into federal custody.

RELATED: Fax and time and date of transmission to ICE

In a statement issued Tuesday, the sheriff department said it has “no legal ability” to hold a person without a warrant.

“Denver has never, and will never, condone dangerous or violent individuals being on our streets, immigrants or not. However, detaining anyone without a criminal warrant is a violation of the 4th Amendment,” officials said.

“Once individuals in Denver’s jails post a bond, the Sheriff Department has no legal ability to hold them without a warrant, as was the case with Ever Valles.

“The death of Tim Cruz was a tragedy, and the Denver Sheriff Department wishes to send its sincere condolences to his family and friends in this difficult time. The circumstances of this case painfully illustrate the difficult and separate responsibilities of local safety officials and federal immigration authorities.

“Denver believes there has to be a better system for all of us to focus on criminals who mean harm while protecting residents who work hard every day and provide for their families. Denver is focused on enacting policies and practices that protect people’s safety and their rights, including the rights of immigrants, while allowing federal authorities to focus on immigration enforcement that removes dangerous and violent felons from our streets.”

Officials said Denver is committed to creating “a system where federal and local governments respect each other’s responsibilities and work together to close the gaps.”

Valles and Nathan Valdez have been charged with murder in the death of Cruz, 32, at the Sheridan light rail train station on Feb. 7. 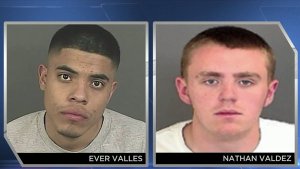 ICE had placed a detainer on Valles after he was arrested in October for car theft and other charges.

ICE wanted to be notified of any pending release because Valles was suspected of being in the United States illegally.

Valles was considered an immigration enforcement priority because he is a known gang member with a gang history documented in the Colorado gang database, ICE said.

The Denver Sheriff Department previously said, “We are part of the criminal justice system and do not hold people on civil matters.”

Man killed in hit-and-run on Peoria

Students learn physics in the wild

How does Denver rent compare to other cities?