BRIGHTON, Colo. — A driver believed to be involved in three hit-and-runs in Weld County was involved in a fourth crash that shut down U.S. Highway 85 in Brighton on Sunday, the Weld County Sheriff’s Office said.

At least two cars were involved in a crash at West Bromley Lane. Both cars had front-end damage. 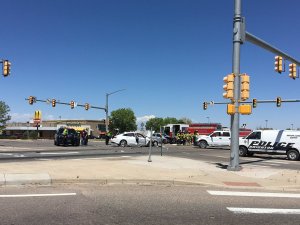 Investigators did not confirmed whether anyone involved in the crash in Brighton needed medical attention.

The sheriff’s office did not say whether the driver was taken into custody.