“Clearly looking at the meter, looking at the crime scene tape there it's a very intense experience … just pulling up to find a parking spot and realizing that something serious happened not at long ago,” Denver resident Lauren Moore said.

Police said it's the same place 35-year-old April Wilson sideswiped a 27-year-old riding a motorcycle on Broadway and First Avenue about 2 a.m. Sunday. The motorcyclist lost control, crashed into a concrete trash can and parking meter and died.

"It's frightening to come up and park and to see that a few hours ago somebody's life was taken by this incident here," Moore said.

Friends who visited the crash site Sunday morning said the victim was a good man.

"We believe speed certainly going to be a factor in this in addition to alcohol," Denver police Sgt. Michael Farr said.

Police said Wilson had been drinking. 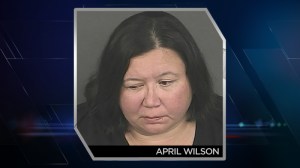 Just 45 minutes later, police said a 39-year-old man was crossing the street on Colfax Avenue and Logan Street when the driver of an SUV hit him.

"The vehicle drove down to approximately Sherman, turned around and came back to the scene," Farr said.

They believe the driver, 40-year-old Ryan Winicki, was also drunk and speeding. According to his criminal history, Aurora police arrested him for DUI in 2009.

Police said at about 6:30 a.m. Sunday, a police officer driving on Interstate 70 and Quebec Street spotted a glimmer of chrome on the side of the road. He went to check it out and found a crashed motorcycle and a 48-year-old man lying dead nearby.

"He laid there for some time based on the fact that the engine of the motorcycle had completely cooled," Farr said.

Police do not have many details, but they believe it happened between midnight and 6:30 a.m. Sunday.

Police said there have been 22 fatalities on Denver roads this year, an increase of six from the same time last year.

"Until people start looking at drinking and driving as being that bad, I think we're going to continue to see problems," Denver police Lt. Robert Rock said.

"It may not as convenient or cost effective than getting behind your own car, but when you look at what is happened here; clearly the costs are really high," Moore said.

Police urge anyone who might have seen the crash on I-70 and Quebec to call the Denver Police Department at 720-337-1000.