GLENWOOD SPRINGS, Colo. — A 24-mile stretch of Interstate 70 will remain closed possibly through the weekend because of damage caused by a rock slide in Glenwood Canyon, the Colorado Department of Transportation said Thursday.

The Colorado State Patrol said the slide caused major damage to the highway. CDOT closed the interstate between Exit 116 in Glenwood Springs and Exit 140 in Gypsum just after 10 p.m. Monday.

The closure came after the second slide of the day was reported in the same location (milemarker 124, west of Hanging Lake Tunnel). Earlier Monday, traffic was slowed in both directions after several boulders fell onto the highway.

Rocks were still coming down the hillside late Tuesday afternoon. Crews intended to open one lane on the eastbound side of the highway Thursday but that didn’t happen due to inclement weather.

“This will consist of one pilot car leading traffic back in forth in that one lane,” CDOT said in a news release. “This will last from several days up to a week as they continue to do rock mitigation.”

According to CDOT, crews worked until Tuesday evening, shutting down at dark for safety. Crews attempted to get some level of reopening late Thursday but didn’t meet that goal because of the amount of rock in the corridor.

“Safety is our No. 1 priority,” CDOT spokeswoman Amy Ford said.

The opening time and day of the highway is dependent on CDOT’s ability to complete mitigation and clear the roadway. In an update Friday, CDOT said they hope to have the road opened by the end of Saturday, but progress has been hindered due to the weather.

“Because of the weather today, we could not fly a helicopter to bring airbags and tools to the rock face,” CDOT deputy maintenance superintendent T. J. Blake said Thursday. “Crews had to haul everything up by hand and that set us back several hours.”

As repairs progress, CDOT will move to open one lane in each direction. It could be several weeks before the damage to the roadway walls and roadway are repaired and the interstate is fully open to regular traffic operations.

A semitruck was caught in the second slide. All passenger vehicles were cleared out of the canyon on Monday night. No injuries were reported.

An alternate route for drivers is to take U.S. 40 through Steamboat Springs and Craig, a 203-mile drive that will add three hours to a regular trip between Wolcott to Rifle. 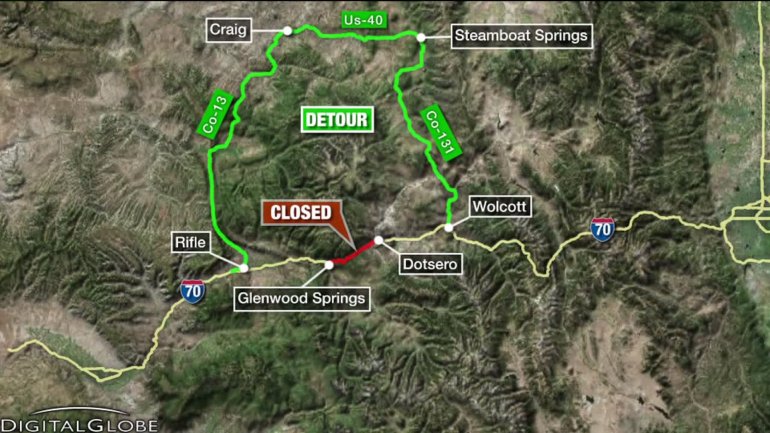 Cottonwood Pass and Independence Pass are closed because of winter, and Flying Pan Road is an unmaintained dirt road that is not advisable for travel during winter.

Bustang is terminating west service at Eagle instead of going all the way to Glenwood Springs. The schedule is the same, but ends at Eagle.

The estimated cost of repair is around 2 to 5 million dollars, according to CDOT.

For the most up-to-date info on the closure, you can visit CDOT’s website.

DENVER (KDVR) -- A cold front will race through Colorado on Tuesday. Front Range highs will drop 15 degrees to 61 degrees for the high temperature. Skies start sunny then turn partly to mostly cloudy with a 10% chance of rain showers. Expect a breezy west wind at 10-25 mph.

The mountains will be mostly cloudy with 1-3 inches of snow at the ski areas. Expect wind gusts 30-60mph above treeline. Highs will drop into the 40s in the mountain valleys and 30s at ski areas.

BOULDER, Colo. (KDVR) -- A large fire is burning at an apartment complex in Boulder.

The fire started around 4 a.m. Tuesday morning near 23rd and Pearl St.

Come the end of the year, Liu will no longer have access to the localized version of LinkedIn, after Microsoft, which acquired the platform in 2016, said last week that it would pull out, citing a “significantly more challenging operating environment.”

Commerce head out to save US jobs, 1 computer chip at a time

Mail theft continues to rise in Aurora and Englewood

Denver voters to decide if group living ordinance should be repealed

Ivermectin clinical trials continue to investigate use as COVID-19 treatment

How COVID has changed the work environment

Record number of six-figure jobs popping up in Denver

‘I have nothing left’: Wedding photographers not paid for work, employer files bankruptcy