AURORA, Colo. — Dive crews were checking a small pond at Olympic Park on Tuesday as the search for missing 6-year-old boy David Puckett entered its fourth day with no hard clues on his whereabouts, the Aurora Police Department said.

Sgt. Chris Amsler said the pond at East Yale Avenue and South Chambers Road will be drained as a precaution if needed. There is no evidence the boy fell into it, he said.

The search ramped up Monday after an Amber Alert was issued by the Colorado Bureau of Investigation. 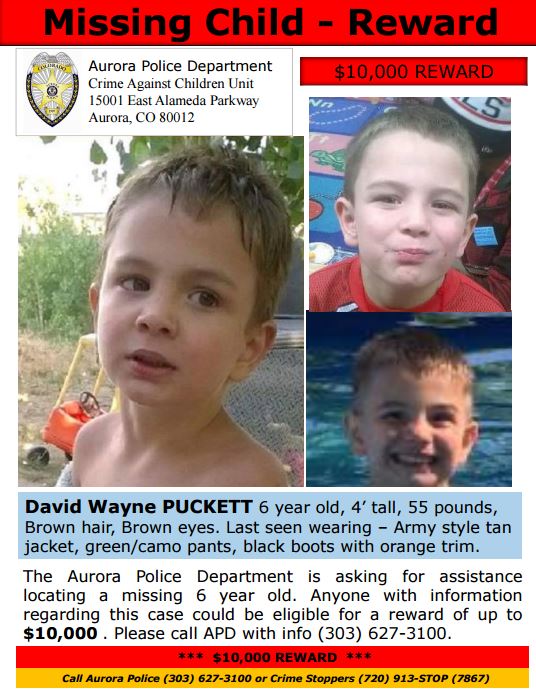 Police have received several tips but none has panned out, Amsler said.

Vehicles leaving the south Aurora neighborhood at the center of the search near Olympic Park (15501 E Yale Ave.) were stopped at checkpoints, while bloodhounds were working and federal agents canvassed the area.

A command center has been set up at David’s school, Dartmouth Elementary. On Tuesday morning, officers with the Aurora Police Department and FBI agents were stopping vehicles in front of the school, looking in trunks and asking if anyone has seen the boy.

Staff members return from winter break on Tuesday and students on Wednesday, and grief counselors will be made available, Aurora Public Schools said.

Police are also talking to known sex offenders in the area. The boy’s family is fully cooperating and the home has been searched several times, police said.

At least 10 federal, state and local agencies have been helping search for the boy, who is under 4-foot and weighs 55 pounds. Police said the search is still focused on a 2.5 mile-radius area.

The public is being asked to search their properties, sheds, garages, abandoned cars — anywhere a small boy could hide.

Several volunteers helped search for the boy on Sunday, but police have said the public’s help searching in the area isn’t needed because of the large presence of law enforcement and the use of bloodhounds.

(NewsNation Now) — President Joe Biden is set to kick off a more urgent campaign for Americans to get COVID-19 booster shots Thursday as he unveils his winter plans for combating coronavirus and concerns about the omicron virus variant.

The plan includes a requirement for private insurers to cover the cost of at-home COVID-19 tests and a tightening of testing requirements for people entering the U.S. regardless of their vaccination status. But as some other nations close their borders or reimpose lockdowns, officials said Biden was not moving to impose additional restrictions beyond his recommendation that Americans wear masks indoors in public settings.

10 things to do in Colorado this weekend: Christmas lights, shopping, family events: Dec. 3-5

DENVER (KDVR) -- Holiday events are in full swing across Colorado. The weather forecast for this weekend is also a great reason to get out and about.

It will be dry Friday through Sunday, with highs in the 50s and 60s.

Colorado Parks and Wildlife suspect the blue confetti was left behind after a gender reveal party. This would not be the first gender reveal to leave trash in the park.

Cole Finegan sworn in as U.S. Attorney for Colorado

Debt collectors can now slide into your DMs

Bradley Cooper says he was held at knifepoint in NYC subway

Castle Rock neighborhood wakes up to cow herd on lawns

Castle Rock neighborhood wakes up to cow herd on lawns