BOULDER, Colo. — Dynel Lane was sentenced to 100 years in prison Friday for attacking a pregnant Longmont woman, then cutting her baby from her womb.

The DA’s office said during the hearing that the sentence they sought was adjusted after further examination of each count. They ended up seeking a 118-year sentence.

On March 18, 2015, Michelle Wilkins, who was seven months pregnant at the time, went to Lane’s home after responding to a Craigslist ad for baby clothes in a ghastly case that shocked many in Colorado and across the country.

Wilkins recounted the attack in testimony during the trial. Lane hit Wilkins over the head with a lava lamp and stabbed Wilkins in the neck with the broken glass. Lane then cut Wilkins’ abdomen, taking the unborn baby and leaving Wilkins for dead.

The baby, later named Aurora, did not survive outside the womb. Lane was not charged with murder in the baby’s death because of Colorado law.

Witnesses testified during the sentencing hearing on Wilkins’ side and Lane’s side.

Wendy Lois Wilkins and Mark Wilkins, Michelle’s parents, as well as her sister Sarah Wilkins testified to the impact of Lane’s actions on Michelle and their family.

Michelle Wilkins took the stand, along with a large picture of her daughter, and addressed Lane directly.

“It is clear that you need healing and it is my sincere belief that you get it,” Wilkins said. “You’d knowingly left me to die, multiple times. The only tears that you shed during the trial were those of self pity to the sound of your own voice as your lies were slowly revealed.

“I believe you have lost your privilege to live in our society not only because of your actions during the attack, but also your actions since the attack. Your inability to acknowledge the immense cruelty and evil you committed only proves you are not fit to walk freely amongst us ever again.”

Wilkins said she hoped Lane would get the maximum sentence and has time to atone, reflect and meditate with prayer on her actions. 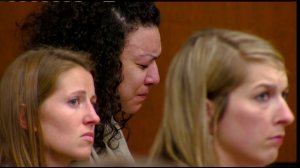 Lane declined to testify on her own behalf during the sentencing hearing, but she cried when friends and family testified about her loss of her son. Her mother and sister testified that Lane was a “loving, compassionate person,” and that the attack was out of character for her.

The defense asked for concurrent sentences instead of consecutive ones, citing Lane’s cooperation in prison and her ability to be rehabilitated.

The prosecution asked for a “unique sentence” to fit the facts of the “unique crime,” saying that never before in Boulder County, or even in Colorado, has there been a crime where a pregnant woman was intentionally attacked to steal her baby and the woman survived but the baby died.

“The People suggest that the court should fashion a sentence that is appropriate for a crime ‘spree’ rather than one criminal act and the sentences should be imposed consecutively to reflect the complexity of the case and the cruel manner in which the crimes were committed,” the Boulder County District Attorney’s Office said in a court filing.

Boulder County District Attorney Stan Garnett cried as he told the judge that Lane deserved the maximum sentence because baby Aurora never got to experience life with her family.

Lane was sentenced to 100 years in prison based on the following:

Chief District Judge Maria Berkenkotter noted during sentencing that Lane never expressed remorse during the course of the trial. She also expressed sympathy for the Wilkins family because baby Aurora never was able to experience the life she was meant to have.

Lane cried when the judge read her sentence. Her defense attorneys said during court Friday that they would appeal the sentence.

During a news conference after the sentencing, Garnett and Wilkins addressed the media.

“I’ve never seen a case as vicious, as cruel, as deliberate and awful as this,” Garnett said. “People are capable of doing horrible things. When that happens, society needs to respond appropriately. In this case, I believe justice was done and we’re pleased with the sentencing in this case.”

“For me, it felt gratifying to be seen and acknowledged by the judge. Judge Berkenkotter was clearly listening to everything that we were saying,” Wilkins said. “In this whole process, it’s hard to feel acknowledged because Dynel in any outward sense is not taking any accountability except in the judicial process. So in that sense, it feels that justice was served.”

During the trial, the prosecution played a taped interview as Lane was questioned by detectives from the Longmont Police Department. Lane told investigators that it was Wilkins who had a knife and tried to stab her.

Lane showed little emotion during the trial. But when prosecutors played the recording, she cried. Lane did not testify and the defense rested without calling any witnesses.

Defense attorneys had argued the attack was made impulsively and that it wasn’t planned, and that she should be held accountable for reckless manslaughter and not attempted murder. The jury disagreed.

After the guilty verdicts were read, an emotional Wilkins said she forgave Lane but said she was angry at her.

“It had just never entered my worldview that someone could be so cruel and value life so little,” Wilkins said. “Many have asked me how I feel about Dynel Lane. Early on I had said I had forgiven her. It’s part of who I am as a human being. … So, no, I do not hate Dynel. But I am angry for all of the pain she has caused. The deceit and for her selfishness. And this element is hardly fathomable to me.”

(NEXSTAR) - With more than half the country at least partially vaccinated, many are eager to venture forth from their homes and travel.

But before you hit the road, it's important to remember that COVID-19 is still prevalent in the U.S., and airports bring together people from all over the place -- not just from the region where the airport is located.