DENVER -- Denver is on pace to hit a record for the number of auto vs. pedestrian accidents. 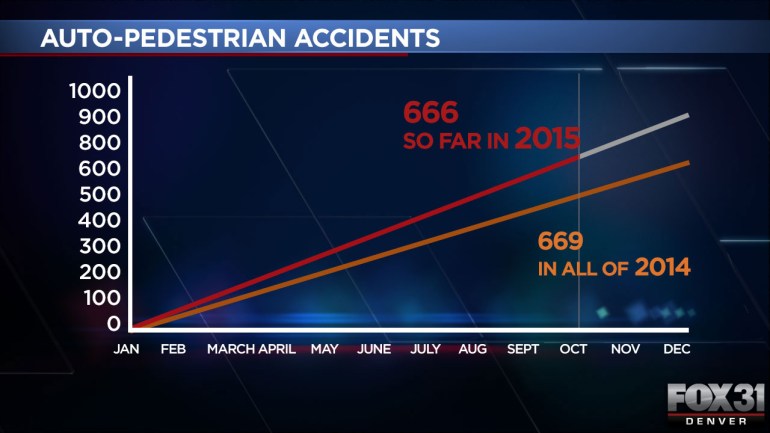 The FOX31 Problem Solvers wanted to know the locations where pedestrians are most likely to be hit, so we examined accident reports in Denver to find the top five locations.

The crosswalks at Denver International Airport top the list with 17 accidents since 2011.

Del Berry of Evergreen was trying to catch a flight to Hawaii when a cab driver hit his scooter in the crosswalk.

“If I had kept going he would have run over me because he wasn’t looking," Berry said. "I was trapped against the hood and he was still moving. So, I was banging on the hood and he finally looked up and said, ‘Did I hit you? Yes.'”

Berry was not seriously injured and made his flight. Police cited the cab driver for the accident.

“I don`t know about you, but I've had plenty of times when I'm rushing around trying to catch a plane and when you're in a hurry you just don`t pay as much attention," Rock said.

The second most likely place for an auto and pedestrian accident in Denver is at 13th Avenue and Broadway, where nine crashes have taken place in the past five years.

Rock said it’s no surprise with this intersection’s proximity to the State Capitol and other popular tourist attractions.

“You’ve got folks coming from all over the state, again, unfamiliar with the area,” Rock said. 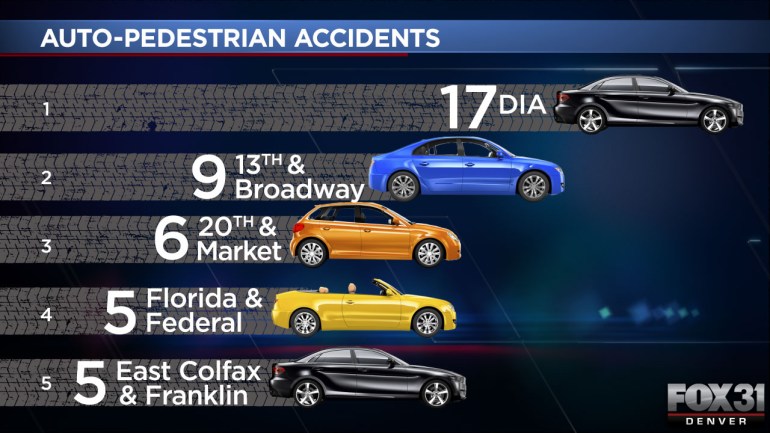 The third most likely spot for a pedestrian to be hit in Denver is at 20th and Market streets, where six accidents have happened in the past five years.

An accident in this busy intersection in the Lower Downtown bar district happened earlier this year. Rock said alcohol is usually a factor.

“You have a lot of people who are drinking and walking and not really able to pay attention to everything.” Rock said.

Police say no matter where the accident is, there is usually one common denominator and that is distraction.

He showed a video captured at Florida and Federal to illustrate the point.

The video shows two people running across the street to catch a bus. The pedestrians dart between cars before being struck.

“They just made a series of bad decisions that led up to it and you’re are like this was bound to happen," Rock said.

Rock has one piece of advice for pedestrians and drivers:

“Turn your phone off until you reach your destination,” he said.

The fifth location marking the most auto and pedestrian accidents is the intersection of East Colfax Avenue and Franklin Street, where five pedestrians were hit between 2011 and so far in 2015.

DENVER (KDVR) -- The family of a Vietnam War veteran and Purple Heart recipient has been waiting for nearly a month to lay their loved one to rest.

LeRoy Torrez’s funeral had to be put on hold due to the coronavirus pandemic, now unexpected expenses are delaying his burial.

DENVER (KDVR) - A Denver Sheriff's Deputy has been fired for his role in a drag-racing incident on I-25 near Castle Rock in Mid-January. Deputy Jason Martinez was terminated June 30, according to a disciplinary document obtained by the Problem Solvers.

Martinez was in the passenger seat in a transport van being driven by fellow deputy James Grimes. The two deputies were transporting three inmates from the Bent County Jail to the Denver Jail when a Colorado State Police airplane spotted the van going 100 miles an hour in a construction zone where the post speed limit was 60 mph.

US sets single-day record for new coronavirus cases with over 60,000