DENVER — An insurance company first told a member of the National Guard it would pay for her surgery. All Lynn Himes had to worry about was a minor co-pay for the procedure.

But the insurance company, Tricare, changed its mind after the surgery. She contacted the FOX31 Problem Solvers and her story became part of a series Serving Those Who Serve.

Himes serves in the engineer unit with the Wyoming National Guard.

“I leave for drill with the National Guard headed up to Cheyenne,” she said.

Two years ago, she had a much-needed jaw joint surgery.

“I was told I would have a $25 co-pay for the surgery and nothing else,” she said.

“My heart just completely dropped. For one I’ve never seen a bill this large before let alone one I was responsible for,” she said. 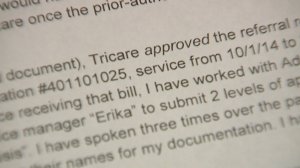 Paperwork shows Tricare agreed to take care of the bill. But after the surgery, an adjuster refused to pay.

“I felt as an armed service member, my rights were violated by receiving this bill,” Himes said.

For the next 15 months, Tricare sent her a massive bill each month.

“I already have a lot of student loans and to add this on top was terrifying,” she said.

She tried everything to get help.

“I went through billing advocates and lawyers and no one could help me,” she said.

After four months, Tricare agreed to pay the bill. Himes now has a zero balance.

“The fact that I have zero is a weight off my shoulders,” she said.

What to know about travel in another pandemic summer

19 children, 2 adults gunned down in Texas

What you need to know about summer travel during …

Who should get a 4th COVID vaccine shot this summer?

What to know about travel in another pandemic summer

How should I talk with my kids about school shootings?