DENVER — Can you imagine paying up to $9,000 for a dating service? That’s what Mile High Singles charges for its VIP membership, though the price seems to vary depending on how much customers are willing to pay.

But multiple customers tell the FOX31 Problem Solvers they feel they got taken.

“Their purpose is not to help you meet somebody. Their purpose is to take your money during that interview,” said one female customer who asked to have her identity protected because she’s embarrassed she paid $5,995 for what she thought would be a high-end matchmaking service.

The woman we’ll call Jan said she went in for a prescreen interview at the company’s headquarters on Colorado Boulevard where she was told only 52 percent of customers are offered a membership.

“She asked what I’m interested in, what I’m doing … and I now realize she was finding out my financial situation, which, I’m so naive. And then she says, ‘I’m just going to extend the offer, you qualify,'” Jan said.

It turns out all you really get for your three-year membership is the opportunity to create an online video about yourself and and a log-in account to the Mile High Singles database, where half the members or more are unavailable.

“That’s crazy. How do you get a date with somebody that’s inactive?” Jan said.

A Problem Solvers producer made an appointment with program director Sheryl McDowell, who said she prefers her nickname “The Love Doctor.”

“We’re extremely selective who we send out the invitation to,” McDowell said. “Only 52 percent receive the invite and, of course, I look for honesty and then I got to believe in you.”

During the undercover interview, McDowell said, “I’ve been to more weddings than I can recall.”

When asked how many men she would find on the website, McDowell said, “The members here are extraordinary,” but then went on a tangent about an 81-year-old member who looked great for his age but never gave a direct answer on male membership totals.

In the fine print of Jan’s contract was language that said, “A disproportionate portion of my fee for Mile High Singles is earned by the end of the initial interview.”

During the undercover interview, McDowell reminded her “Most people go for the VIP and you are receiving 30 percent off.”

Later, McDowell would clasp hands with the producer and told her, “There is no guarantee you are going to meet your soul mate, I can tell you that. But you will meet quality men.”

Jan said she met no one and said McDowell spoke more like a used car salesman than a matchmaker.

“She really spoke to my weakness. I was very vulnerable,” she said.

Jan didn’t look at online reviews until after she paid. One such review from Rip-Off Report.com reads, “They don’t tell you how many are in their database or let you search it until you have paid. Once you do have access what a major disappointment!…DON’T DO IT!!!!!!!!”

Other reviews from Yelp read, “Steer clear” and “Waste of time, not to mention money.”

“I’m angry angry, I’m upset and I want other people to know,” said John, a male customer whose identity was also protected.

“Thousands they told me, the word they used was thousands,” as in members according to what John was told.

He said he was conned into paying $6,500 and months later hasn’t landed a single date.

“Of the first 100 (members), two that were available,” said John, remembering the number of women who fit his demographic.

Two months later, the Problem Solvers caught up with Jan to see if her experience with Mile High Singles got better.

“No, sadly not,” she said. “There were just so many technical problems and just inability to meet anybody. It just seemed like a real farce.”

McDowell declined a sit-down interview, but she was approached outside her office building as she came to work one morning. 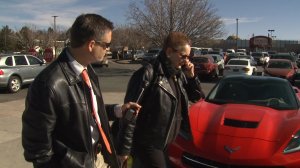 “Can you tell us why so many of your customers tell us that your dating service is a complete rip-off?” she was asked.

McDowell stayed on her cellphone and ignored the questions about her pricing rates.

After McDowell went into her office, the Problem Solvers met McDowell’s 11 a.m. appointment in the lobby. A woman who only wanted her first name, Jill, used, said she found out about Mile High Singles on Facebook.

“I’m fairly new in the area and don’t really have connections,” Jill said.

When told she might be offered 30 percent off the $9,000 VIP package, Jill said her response would be “Um, no is my response to that, No.”

Jill’s appointment didn’t last long. McDowell took Jill to a back room only to say she needed to reschedule because the woman who was supposed to conduct Jill’s interview was sick.

But Jill said she thinks McDowell canceled after seeing her talk to the Problem Solvers.

“Did they tell you how much it might cost if you come in and talk to them?” Jill was asked.

“No and they just say I don`t have that information, you have to speak to someone else which is again kind of a red flag,” she said.

Jill said she had no plans to reschedule and was done with Mile High Singles.

The dating service used to be known as Great Expectations, but the company got in trouble with the attorney general’s office in Arizona and Washington so the Denver affiliate changed its name.

The Colorado Attorney General’s Office has received multiple complaints about Mile High Singles in recent years but so far hasn’t taken any action against the company.