DENVER -- Two years after the FBI shut down his company, , the owner of Brown's Compounding Pharmacy has plead guilty to health care fraud and selling a drug unapproved for interstate commerce.

In December, Brown gave up his company's registration after state investigators said he broke pharmacy board rules by saying in a document that he "should know said drug has no recognized medical utility or application."

At the time, it served patients in 38 states, and bragged it was going to triple its staff of 95 people and draw all of its energy from solar power. 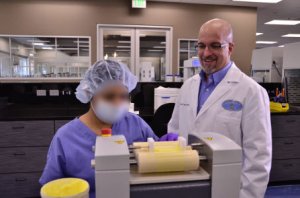 Brown's Compounding Pharmacy advertised itself as having the ability to create customized medications to meet individual patient needs.

But in June 2015, federal investigators shut down the lab. Investigators say the customized medications were never approved for interstate commerce.

Compounding centers alter pharmaceutical ingredients to create medications that aren't normally available in drugstores and they can put the drug into a cream instead of a  pill.

It's the pain creams Brown sold that raised concerns from the Drug Enforcement Agency, the FBI and the State Board of Pharmacy.

In court, Brown said the crimes were committed by his employees but as CEO, he took responsibility.

Federal judge Wiley Daniel said Brown caught a bad break but after court, Brown wouldn't say if he agreed with the judge's assessment.

He has a hearing in September before the State Board of Pharmacy where his professional license could be permanently revoked.

DENVER (KDVR) — 2020 was the year Terrisa Coobs bought her first mountain bike with all the bells and whistles. It was $1,500 dollars, and she felt lucky to find it.

“It was the very last one of its kind at REI, but it was on the East Coast,” said Coobs.

DENVER (KDVR) -- It's a big week for Colorado seniors, according to Governor Polis who on Tuesday addressed the concerned seniors unable to schedule an appointment for a vaccine, claiming no more doses will sit on a shelf.

"We will use every dose to give to people over the age of 70 that want it," said Polis. "We are doing everything we can do get every vaccine we can get in the arm of a Coloradan over 70 years old."

‘No one can read it’; Many Coloradans switching to encrypted messaging apps following Capitol mob

DENVER (KDVR) — Millions of people around the world, including thousands of Coloradans, have been downloading encrypted messaging apps like ‘Signal’ and ‘Telegram’ in droves following last week’s attack on the U.S. Capitol.

‘His corrupt friends all come first.’ Tiger King reacts to not being pardoned by Trump

It has been over 50 days since Denver last recorded over 2 inches of snow; a look at the latest winter storms