WESTMINSTER, Colo. — Dominic Casement says he was already on the ground in handcuffs when a Westminster police officer pistol whipped him on his head  and across his chin before kicking his face.

“At the time I got kicked in the face, my face essentially bounced off the ground,” said Casement, who has now filed a federal civil rights lawsuit against Roger Stockman and the Westminster Police Department for the Nov. 11, 2017 incident.

Casement was treated for a broken jaw and head lacerations, which required five staples in his head and stitches on his chin.

Casement was the passenger in a stolen car when he was placed into custody by Westminster Officer Scott Holley. Moments later, Stockman arrived and used his pistol to strike Casement in front of officer Holley.

“I tried to cry out, he (Stockman) told me to shut the f**k up and hit me again,” said Casement.

It was Holley who immediately reported Stockman to internal affairs for excessive force.

“I give him (Holley) all credit. I think without him, I may have died there that night. He

“Roger Stockman got the velvet job every step of the way. As a criminal defense attorney, we know in this state, if you’re charged with assaulting someone with a deadly weapon and you caused them seriously bodily injury, you should go to jail. You should be arrested. You should get a bond,” said Salahuddin, who pointed out Stockman never even had to pose for a mugshot because he was given a summons instead of being arrested.

“I think that definitely shows a double standard in society. I mean, if it had been anybody else besides a cop, they would’ve been thrown in jail with probably an outrageous bond,” said Casement.

“He broke my jaw. It’s out of line completely. I don’t eat out of that side anymore,” said Casement. “I’m terrified of cops. If I ever needed a cop to call for any reason, I couldn’t do so now.”

the department refused to tell FOX31 if Stockman resigned or was fired.

It took the state of Colorado until September 2019 to revoke Stockman’s certification, ensuring he doesn’t get hired as an officer again. 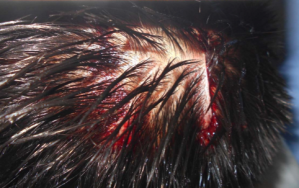 The lawsuit criticizes Westminster police for not equipping its officers with body cameras.

In a statement, Materasso said Westminister police are conducting extensive research into the use of body worn cameras.

“Westminster wants to be diligent in our review and analysis before committing substantial tax payer dollars to this program.  We are reviewing a number of nationwide studies and comparing those to local facets and considerations to determine if a body worn camera program best serves our community,” Materasso said.

FORT LUPTON, Colo. (KDVR) -- Police were looking for a white male who had just led them on a high speed chase, after stealing beer and laundry detergent from a Safeway in Firestone on April 27, 2019.

But the person they released a K-9 on and then handcuffed was a 14-year old Hispanic male.

LONGMONT, Colo. (KDVR) -- If you think your water bill is on the high side, consider what Joe Peppers received in the mail. The Longmont resident tells the FOX31 Problem Solvers he was shocked to learn he owes more than $2,300 in water charges for last month.

‘Frankly, I’ve never had a water bill anything like that,” he said.

MORRISON, Colo. (KDVR) -- The Town of Morrison, long known as a speed trap, has been forced to dismiss traffic tickets after the Colorado Department of Transportation (CDOT) learned Morrison lowered speed limits without a state traffic study.

The speed limit through downtown Morrison is 25 mph. On June 15, then-Police Chief George Mumma asked the state if he could slow traffic to 20 mph because restaurants were seating people on the sidewalk near the street due to COVID-19.

Does the coronavirus spread easily among children?