JEFFERSON COUNTY, Colo. — The father of a teen boy who killed himself by smashing his car into a street pole while high on LSD and THC says his son’s school could have warned him about his son’s psychedelic drug use but didn’t.

“It’s the worst thing anybody could go through, and when you find out that people you trusted knew and they could have done things to help you, it makes it that much worse,” said Brock Williamson, Caden Williamson’s dad.

According to a police report, Caden, who had just turned 17 when he died in May, sent a text message to his girlfriend prior to the crash near West Ken Caryl Avenue and Kendall Boulevard.

The message said he had, “reached a higher plane of existence, in which he realized his time on this earth was done, and he was going to move onto another dimension.”

Brock Williamson said he was not aware of his son’s LSD use prior to Caden’s death.

Williamson said officials at Caden’s school, Chatfield Senior High School, could have warned him of Caden’s LSD use because his son’s girlfriend’s mother, Alicia Ornelas, had warned them about it weeks prior to Caden’s death.

“It was in my head that I needed to reach out to (Caden’s) father…but it never transpired,” Ornelas told the FOX31 Problem Solvers. Ornelas said she had never met Williamson prior to Caden’s death, but she did hold a meeting with school leaders to tell them about text messages she found between Caden and her daughter, discussing their LSD use on school grounds.

“The messages were more like, ‘I had so much fun yesterday. I can’t wait to do it again,’ along the lines of…it was something they had done regularly and almost every other day at school,” said Ornelas. “And then, a couple weeks after finding those messages, I found more pictures in (my daughter’s) phone of her using (LSD) specifically,” she said.

Brock Williamson said Ornelas’ information about Caden’s LSD use was never relayed to him after Ornelas reported it to the school.

“How does that school not give you that information? How do they not tell you?” said Williamson.

Instead, Williamson said, the school falsely claimed it had received an anonymous Safe2Tell report, prompting them to search his son for drugs. He said the school failed to tell him that the tip specifically mentioned LSD or that it came from Ornelas, not Safe2Tell.

When they searched him, “(Caden) had a vaping pen on him, which he shouldn’t have had, and apparently he had a small pocketknife in his backpack,” said Williamson, but they didn’t find any drugs. He said his son was suspended from school for one day for having the other items.

Williamson said he was unaware of how the tip about his son had originated, so he expressed concern to school officials another student may have made a false report against Caden.

“(The school official) said, ‘I understand. I don’t see a concern with drugs here,’” Williamson said. “All they had to do is tell me (about the LSD allegations),” said Williamson, who acknowledged that he attributed recent changes in his son’s personality to possible marijuana use.

The FOX31 Problem Solvers obtained an internal email sent from the school principal to the dean of students in May, referencing the possible fake Safe2Tell report. “(I believe you said you used that (Safe2Tell) as a cover to protect who told us?)” the principal, Chad Broer, wrote to Sarah Bixler. 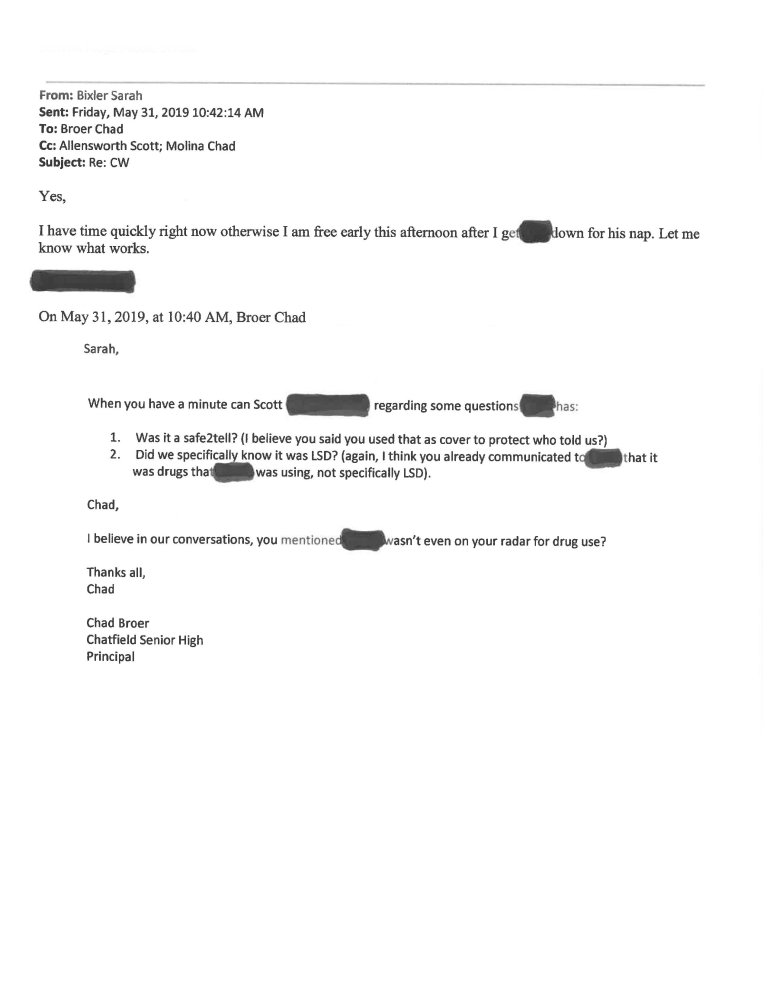 According to Jeffco Public Schools, “No Safe2Tell report was created,” in Williamson’s case.

“We cannot comment on any specific student situation; however, in this instance it appears a school official used the term ‘Safe2Tell’ as a means for describing an anonymous tip about a concerning issue,” said Tammy Schiff, a spokesperson for the district.

“We encourage all students and parents to contact school officials with matters of concern and they can do that in many ways – in person, by message, or through the Safe2Tell system. When an individual provides information directly and asks that they remain anonymous, we respect that request if at all possible and in this situation, the parent (Mr. Williamson) was pressing the school to reveal a source of information. It was a mistake for the school official to use the term in their efforts to protect the anonymity of a report of concern.”

Ornelas said she did not ask to remain anonymous. “I never asked, and they never mentioned,” she told the FOX31 Problem Solvers.

School administrators declined to address other specific questions about Williamson’s allegations, citing “student privacy rights.” According to Schiff, the school also received a notice of claim filed by an attorney on behalf of the Williamson family.

While LSD use is of concern, Schiff said the district does not consider the number of cases within the district to be “outside the range of what might be expected in a metropolitan school district of our size and it is certainly not an epidemic.”

She said two students had been expelled for LSD at Chatfield Senior High School over the past three years.

“Please be assured that we take all complaints from our students and parent community seriously and are responsive to the complaints. Additionally, we constantly strive to provide a safe learning environment that supports our students,” she said.

“I’m not blaming the school for Caden’s actions. I’ve always supported the school, but you can’t lie to parents. Period. You cannot lie to a parent,” said Williamson.

After Caden’s death, Williamson said he learned from Caden’s girlfriend that other students were regularly using LSD too.

Caden’s other friends told the FOX31 Problem Solvers LSD is easy to get.

“I could go on to my phone and text like three people and I’d have it probably in twenty minutes,” said Bailey Sackett, a 2019 graduate who was a close friend of Caden. Sackett said she has never used LSD, but she knows multiple students who have tried it.

“I think kids do it because it’s a way to escape your reality for a couple of hours,” she said.

Sackett said she also knew Caden had been using LSD and fought with him about his decision.

“I actually saw him get it. I was there when he received it in the first place, and I was like, ‘Dude, you shouldn’t do that,’ and he was like, ‘It’s fine. I’m just going to sell it to make some more money,’” she said.

“It’s definitely a trend now,” said Seth Osborne, who said he was best friends with Caden. “You’ll see a lot of Snapchat stories – like kids are going to raves, partying, and they just take pictures with tabs on their tongues a lot,” he said. Osborne said he does not use LSD.

According to the Jefferson County Sheriff’s Office, “LSD is a drug that is not as abundant as other drugs, both in schools and county-wide.”

The FOX31 Problem Solvers reviewed records related to Safe2Tell reports, 911 calls and non-emergency calls made to Jefferson County dispatchers since 2018 and found dozens of incidents involving juveniles alleged to have used LSD.

One Safe2Tell report at Chatfield Senior High School described a female student who had “Snapchat pictures of a lot of acid.” The tipster reported that she was worried the student wanted to overdose.

Six months later, a different report at the same school was filed by a mother who reported that her daughter’s friend had consumed “a tab of acid” on Snapchat.

A Jefferson County Sheriff’s Office spokesperson also confirmed that a teenage relative of the Chatfield Senior High School resource officer had also been exposed to an LSD incident at a school event in recent years.

A tipster at Green Mountain High School contacted Safe2Tell to report a school bully who was known to sell acid to other minors at school.

According to Arvada police, officers arrested two students from that school in 2018 after they were accused of selling LSD to multiple other juveniles. Schiff said that case stemmed from a Safe2Tell report in February 2018.

“School Administration immediately opened an investigation. By the end of the day, 16 students were identified to be involved. Twelve students were suspended, and four students were expelled,” she said. “All parents were notified, and students were offered Drug Counseling Services.”

“Our Department of Health Services is also working in conjunction with Rocky Mountain Center of Health and Jeffco Public Health on creating materials and presentations educating staff, families, and students on all substances, including LSD,” Schiff said. “Nurses are teaching and educating high school staff about the signs and symptoms of being under the influence of a hallucinogenic drug, like LSD. We want our staff to recognize when a student is hallucinating and respond immediately to get students the right help at the right time.”

Williamson said he hopes his son’s death will be a wake-up call for students and schools.

“I don’t want this to happen to any other students and sweeping it under the rug is not going to resolve it,” he said. “I understand that the school has several thousand students and you can’t control what they all do. I couldn’t even control what my son was bringing in and out of the house,” said Williamson. “But they at least could notify people in the community that this had occurred.”

Ornelas said her daughter is working on getting help but the loss of Caden has been traumatic and difficult.

“It’s something that will change you forever,” Ornelas said.

“They can’t save every student, but if you know that there is a problem…take the steps to do something. If what you’re doing already isn’t working, change it up,” Ornelas said.

How aid was provided to migrants in Denver

Man charged in crash that killed family of 5

It’s been 377 weeks since the Broncos beat the Chiefs

26-year-old charged in crash that killed family of …

Colorado’s fertility rate plummeting, one of US lowest