HIGHLANDS RANCH, Colo. —Lawsuit claims some Instant Pots can be opened while still pressurized. FOX31 tested that claim and found it to be true.

TRAGEDY IN THE KITCHEN

Matt and Mary Cooper’s family kitchen has always been a gathering place, buzzing with activity. It’s not hard to figure out why. The Highlands Ranch couple is raising six children — ranging from ages 3 to 14 — with one more due any day now.

Mary had seen ads which touted the Instant Pot, a wildly popular brand of electric pressure cooker, as a convenient way to fix homemade meals quickly. She jumped online and ordered one. 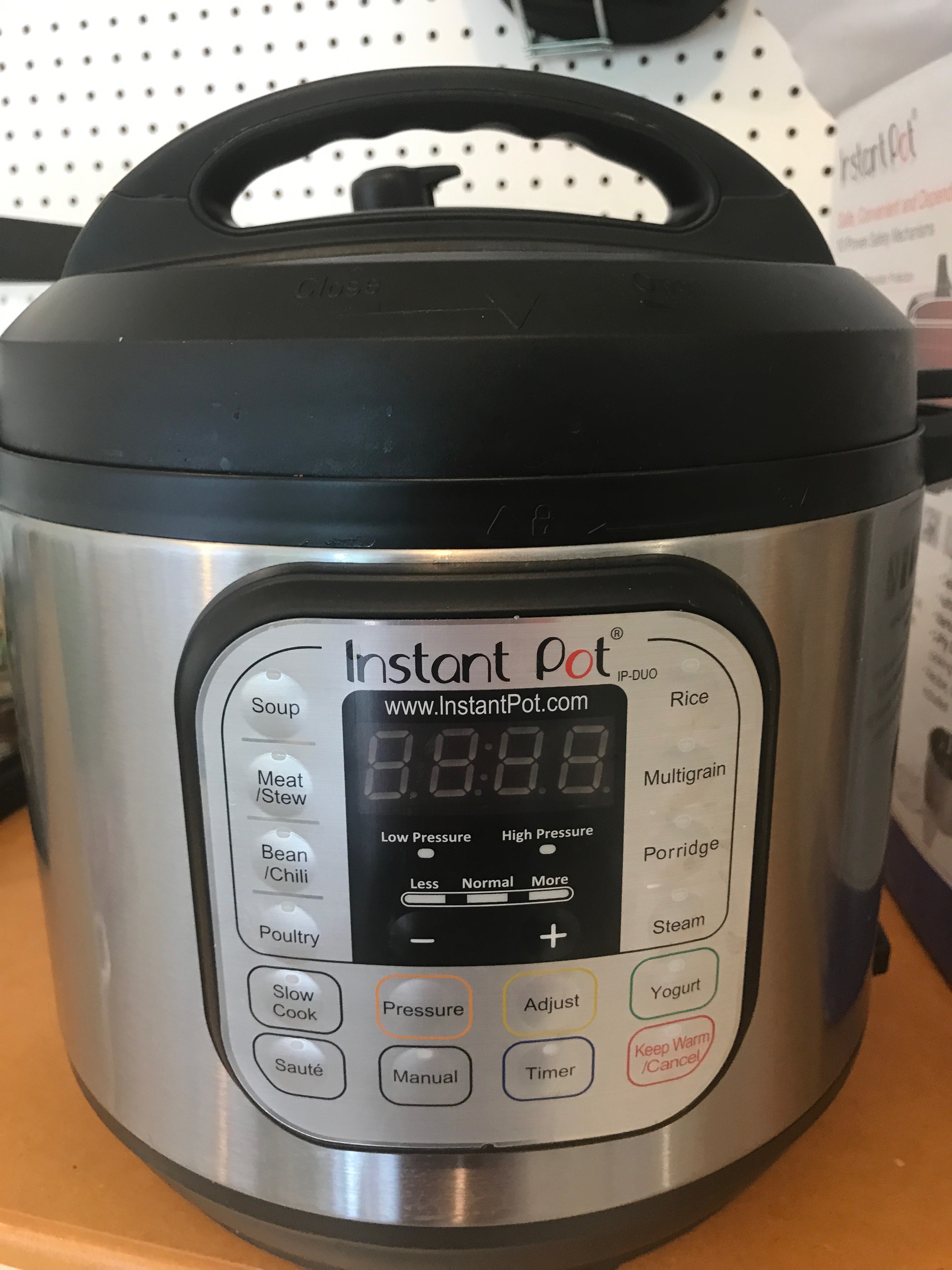 “I thought Instant Pot was the greatest invention. I thought it was going to help my soup cook faster. I thought that was fantastic. Anything that makes dinner faster and easier is great for a young mom,” Cooper told FOX31 during a recent on-camera interview.

After several successful trial runs and reading all the instructions, Cooper decided to make soup for an acquaintance whose mother had recently passed away.

“I had made the exact same soup before, cooking with the kids. Everybody is by the island around and Caroline wanted to come help me. The soup is done. It beeps it’s ‘done.’ We manually vent it and steam comes out telling you that it is un-pressurizing,” Cooper said. “The valve float drops, and we go to open it and put the kale in. We were just going to add kale. And it exploded. Completely exploded.” 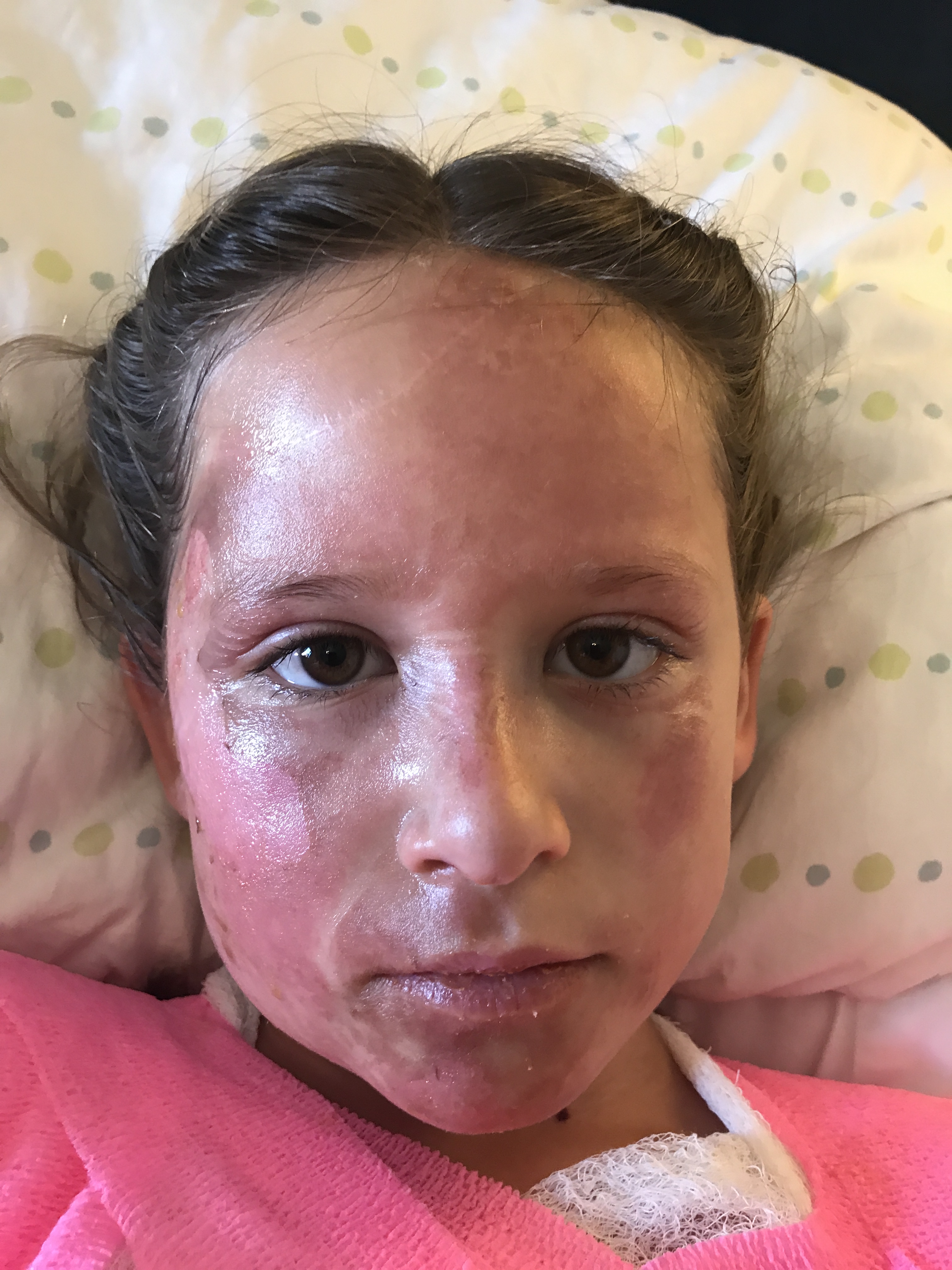 Now 11, then-9-year-old Caroline was suddenly covered in scalding hot soup and her face burned by a hot burst of steam.

“I went into the kitchen to help my mom cook her soup because I love cooking with my mom. And when we vented it, I was opening it, and it just exploded. I closed my eyes. I remember my mom was on the floor. My dad had come running down the stairs,” Caroline said. “I was yelling at my mom to get my shirt off because it was still burning me, so my dad picked me up and took me to the hospital right away because my mom was in shock.” 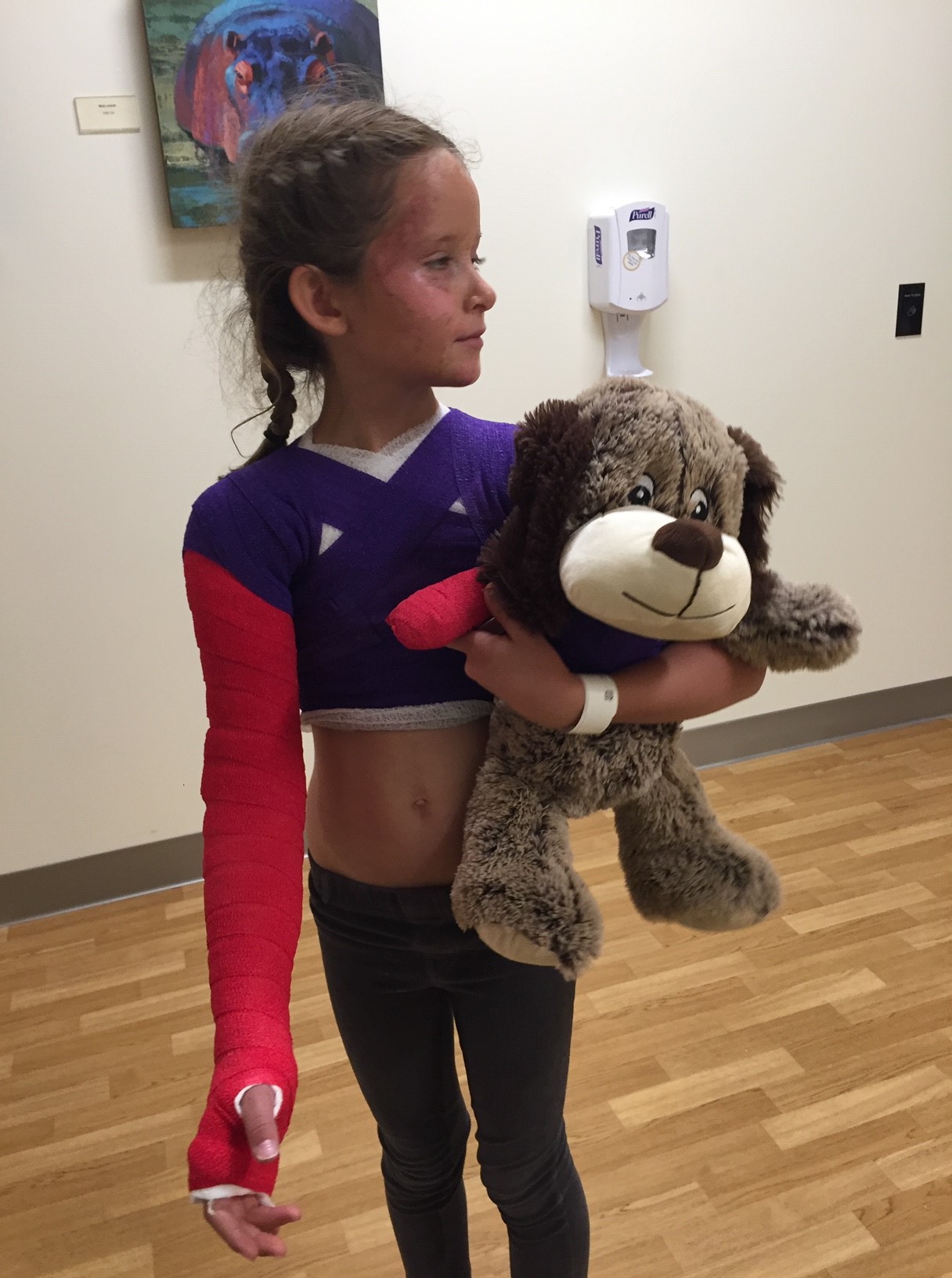 “The sound was horrible. A true explosion,” said Mary Cooper. “The lid flew somewhere — I don’t even know where — and every bit, every bit of the soup came out of the pot and was in our kitchen. On the ceiling, on the floor. All the walls were covered.”

Caroline sustained third-degree burns on about 16 percent of her body. Weeks’ worth of treatments at Children’s Hospital Colorado’s Burn Center were painful, both physically and mentally.

“Caroline did not want to see her burns, so they would hold up a sheet so her face didn’t have to look at her body, so they had to dress her and clean her wounds and redress them and put casts on her so she couldn’t move,” Mary Cooper told FOX31 while tearing up.

Caroline told FOX31, “It was really scary, and I have anxiety still today about it and I was too scared to be around hot things.” 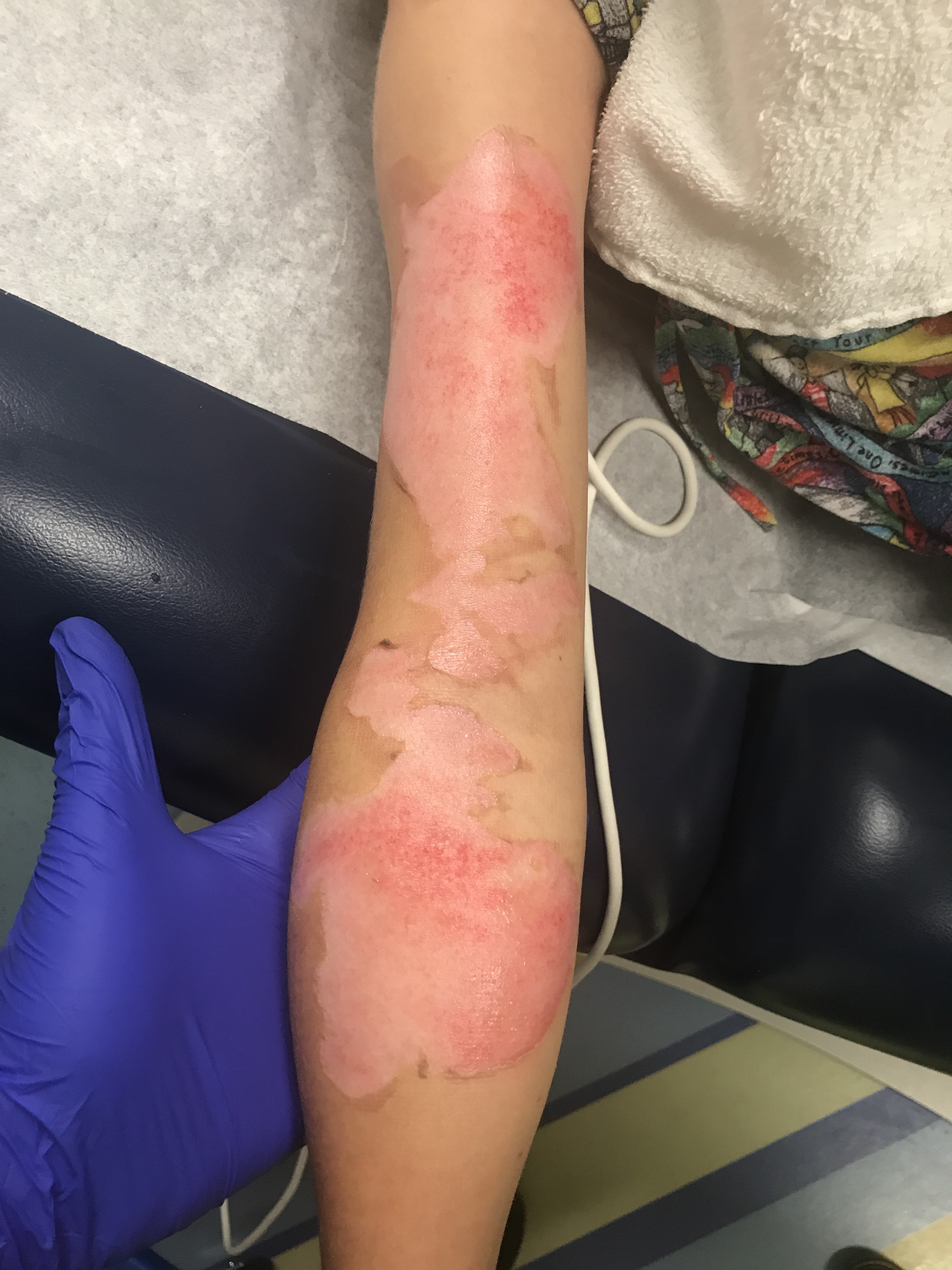 The accident occurred in September 2017 and is the active subject of a lawsuit against Instant Brands, the parent company of Instant Pot. The corporation is listed as a Canadian company, with manufacturing occurring in China.

According to the lawsuit, “Caroline Cooper sustained serious, painful, disfiguring, and permanent scalding burn injuries to her shoulder, arm, chest, and torso.”

The suit also alleges Instant Pot’s primary “safety” claim — that a pressurized pot cannot be opened by the consumer — is “not true.”

Instant Brand countered that claim in the legal response to the Cooper lawsuit, stating, in part:

“.. the product is reasonably safe, is UL listed, and was designed, manufactured and tested in accordance with all industry, consensus, and regulatory standards.”

Chicago attorney Ken Moll, of the Moll Law Group, is handling the case for Caroline. 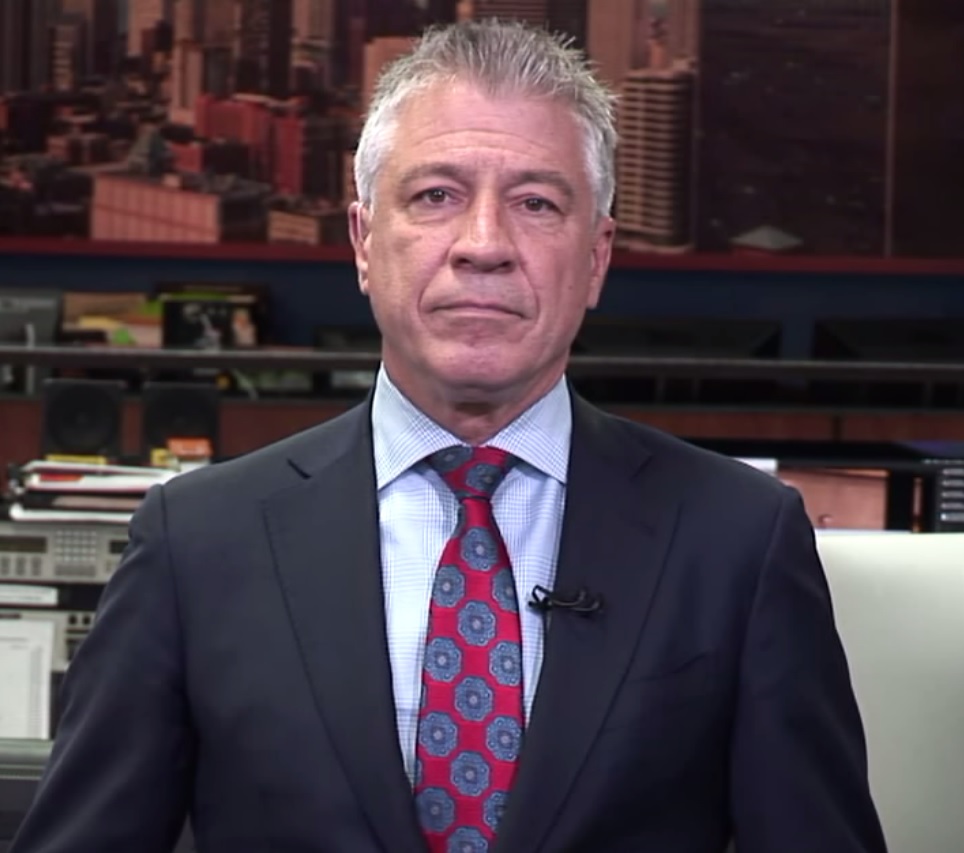 Moll told FOX31 Instant Pot brands have been warned repeatedly that their product has a “design defect” that leads to serious burns like the ones Caroline Cooper experienced.

“It’s certainly a ticking time bomb,” Moll said. “We’ve got a lot of cases around the world where users are experiencing the lid popping off and the contents of the Instant Pot spewing all over causing third degree burns – these are the facts.”

Instant Brands recently merged with the Corelle Brands, the owner of the Pyrex cookware label.

FOX31 Problem Solvers contacted both companies regarding a response to both the lawsuit and the allegation that Instant Pots can be opened while under pressure, despite the marketing claims of the company stating that’s not possible.

The only responses FOX31 received were via the email address “support@instantpot.com.”

The first statement said: “At Instant Brands, we are committed to providing high-quality products to our valued customers, and their satisfaction and safety is our top priority. While it is Instant Brands’ policy not to comment on ongoing litigation, the product complies with all applicable industry standards.”

The second statement reiterated the company would not provide FOX31 with anyone to speak with or ask questions to. It said:  “Thanks for your follow-up inquiry. Instant Brands will have no additional comment for your story beyond our previously provided statement, which can be attributed to “Instant Brands” or a “Company spokesperson” 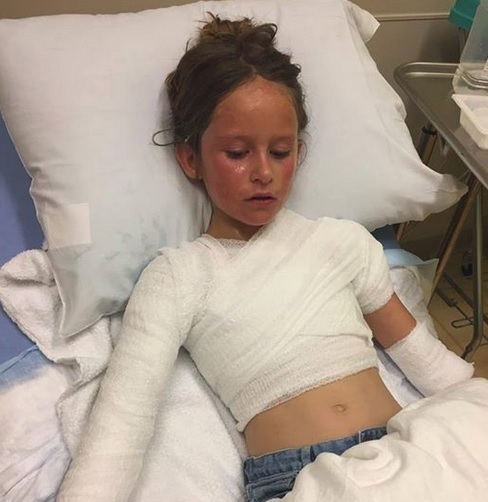 Moll said he wasn’t surprised by the company’s lack of detailed response. He said when the Coopers contacted the company after Caroline’s accident, they ignored them, blocked them on social media, and told him they’d “take the family seriously” if they filed a lawsuit.

“They had knowledge of lids blowing off in the past, yet they failed to change their warning labels,” Moll said. “There is no warning saying ‘Caution: Lid might open under pressure. Please make sure it’s locked.’”

FOX31 found a complaint filed with the U.S. Consumer Protection Agency about a woman being burned by an Instant Pot, plus reports of Pot-caused scalding in Texas, Illinois, Florida and Washington state.

FOX31 Problem Solvers took the additional step of testing Moll’s allegation that consumers could open some Instant Pots while pressurized. 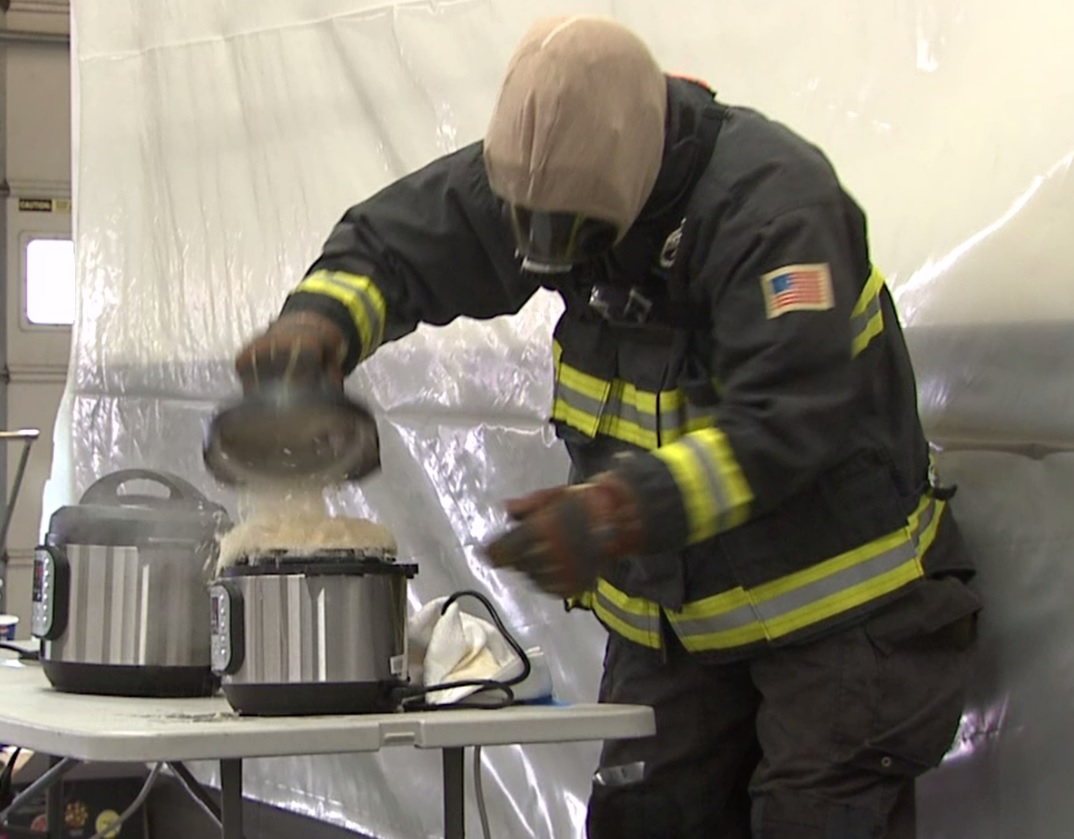 We set up three different versions of Instant Pot within the safe confines of a West Metro Fire Rescue training center. Our special projects team tossed stew ingredients into each Pot, locked the lid and turned them on. We allowed pressure to build inside the units until the metal “stop-plunger” on top popped up. That indicated the Instant Pot as under pressure. We waited a few minutes before trying to twist the locked lid to the open position. Two of the three Instant Pots, under pressure, would not open under normal conditions. The third Pot, however, repeatedly opened under pressure. According to Instant Pot’s user manual, that should never happen. Under “cooking and safety tips”, the manual states: “As a safety feature, until the float valve drops down the lid is locked and cannot be opened.”

The unit which opened under pressure for FOX31 didn’t “explode” the lid off as described by Caroline and Mary Cooper, but scalding liquid bubbled rapidly over the top and sides of the Instant Pot and flowed over the table into the floor.  Without the fire protective gear worn by the FOX31 tester, those hot contents could have caused serious burns.

That message is all the Cooper family wants the world to hear: despite the box saying the Instant Pot has “10-built-in safety features,” consumers need to take extra precautions when opening the device.

“I try to warn people when I can,” said Mary Cooper. “If you want to use it, great! Just use with an extreme amount of caution. Because it didn’t lock. And it was still under pressure.”

Report a problem with a consumer product if any of the following situations occurred:

Nurses calling out sick starting to plateau in Colorado

On-duty Aurora officer hits, kills man who was lying in street before struck